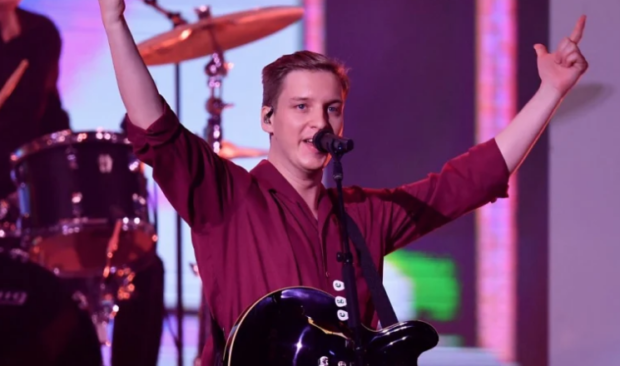 It’s said Nashville country musician Chet Atkins once declared: “Do it again on the next verse and people think you meant it.” It certainly applies to the self-proclaimed “pop and roll” of young UK singer George Ezra, whose debut record, Wanted on Voyage, went big in 2014. As did 2018’s earworm single, Shotgun, which he popped over to play at last year’s ARIA awards.

Shotgun is one of those clearly enunciated, stompily syncopated Year Six graduation disco anthems where half the kids don’t know who sings it but they know all the words. It also encapsulates the spirit of Ezra’s sold-out show: simple, jubilant and relatable.

“Hello Sydney,” Ezra says, and later, “Make some noise, Sydney,” “Can you help me sing this Sydney?” and, “Sydney, you’ve been amazing”.

“If it’s all right with you, we’re going to play some songs,” he says, waiting for the roar of permission. “We’ll play some older songs,” he says (pausing for another roar) “And some new songs, too.

“Turns out Ezra has a knack for explaining the obvious, lopping any lingering edge off what was already a pretty edgeless show.Song names, for example, are announced before, not after, they’re played.

We discover last year’s record Staying At Tamara’s was about staying at Tamara’s.“Instead of doing the normal thing, like booking a hotel, I met a stranger on the internet and stayed in her spare room,” Ezra says. “It was only when I arrived in Barcelona I realised how crazy that was.” Not really, George. It’s called Airbnb.

His 2014 hit Budapest was inspired by getting drunk watching Eurovision in Sweden and missing his train to Budapest the next day. The lyrics on Paradise, meanwhile, “My love, my lover, lover, lover,” came to him while having a lovely time on tour in the United States until he started feeling sick on the bus.
No one begrudges a popular singer a homely story or two. But when the same predictability is enmeshed in every moment of a concert, you start to wonder when that singer might play Shotgun so you can do the same for a taxi.

It’s not so much that we’re conducted into the inevitable crowd singalong on Pretty Shining Peoplefor the “Don’t we all need love?” part. It’s how the drums kick back in to drown us out right when you know they will.

It’s not that the chorus of Don’t Matter Now – “Doo-doo-doo, doo-doo-doo” is inherently wrong, either, but it’s certainly presumptuous for the keyboardist to start clapping above his head, 45 seconds in, imploring us to join in, given it’s the opening song.

After the band bops back out after the encore the crowd bay for Shotgun. “Imagine if we didn’t?” Ezra says.