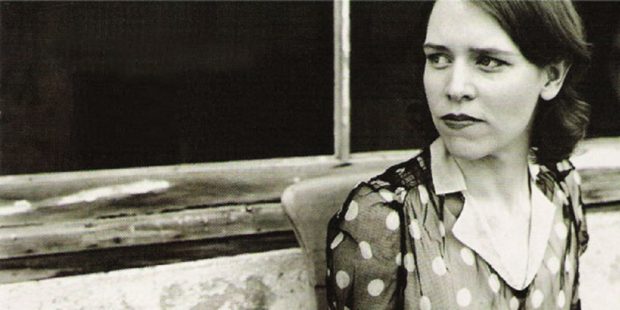 It’s no fun explaining Gillian Welch to people who’ve never heard of her. Country, bluegrass, folk, old-timey – all are approximations that flop far short of her magic. “I’m not really into that stuff,” people say, then glaze over when you protest.

This is why it feels so good to be at one of Welch’s sold-out Australian shows. Everyone gets it; everyone’s got it bad for her. We’re spared the random fandom of people here to hear the hit, because she doesn’t have any. Just five records over 20 years that have slow-burned their way into our lives and loves, all written with her partner, guitarist and harmony-singer, David Rawlings. Our Dave and Gill. This is Dave and Gill’s first tour to Australia since 2004. They don’t like flying so they’ve driven state to state, including fanging across the Nullarbor in January. On hearing of the plan, I asked the PR if I could go too. “How about just the Brissie to Sydney leg?” I asked.

Our road trip would’ve been like the video for ‘The Weekend’ by Dave Rawlings Machine but better because as we streaked along the Eucalypt-hemmed highway, I’d teach them some hilarious slang, give Dave some kangaroo jerky and when we stopped for a Peter’s icy pole at Emerald Beach general store I would glimpse, from beneath my sunnies, Gill watching the waves with her faraway stare. “Throw me a rope / On the rolling tide / What did you want it to be?”

It’s doubtful Welch will return to Australia, and certainly not soon. That would explain the two-set and three-encore retrospective we were treated to. This tour racked up several five-star reviews. Here’s why.

Welch is as willowy as a white silk ribbon. She wears a sleeveless prairie dress and cowboy boots and assumes two postures: folded over her guitar with her forearm strumming, or singing up into the mic, head shaking ruefully and brow furrowed above her offshore gaze. She is magnificently charismatic.

When Welch straps on a banjo to play ‘Rock of Ages’ on Monday (and my favourite feminist anthem, ‘My First Lover’, on Tuesday) she drawls: “When I first started playing this I discovered there was a group of people out there who thought a women with a banjo was a really sexy thing.” By the time the song is over that group of banjo fetishists includes everyone at the Enmore.

Rawlings is upright in a suit and Stetson, his Cuban heels unmoving while his legs sway in surrender to the tempers of his depression-era guitar.

It is like he’s playing guitar whilst riding a runaway skateboard. Or pretending it’s a wild, woodlands animal he’s vainly attempting to tame. Or his guitar is a vessel for its previous owner’s soul and Rawlings is doing all he could, when he played it, to not be overwhelmed by its spirit.

Even in big venues, Welch and Rawlings simply use microphones in front of their instruments to pick up the sound. If the sound they eke from that old-timey set up is any indication, perhaps all acoustic artists should do it this old-timey way. “They sound just like the albums!” says my sister.

Decades playing together have smudged them into a single sound-making entity. Their harmonies are astringent on the bluegrass songs and warm as the afternoon sun on ‘Down Along The Dixie Line’.

When it’s time to pipe down to let their partner shine, their volume control is exquisite. Rawlings literally stands in Welch’s shadow, projected enormously on the wall, but it’s his fiddly, fingerpickin’ solos that stoke frenzies of mid-song applause, partly because his musical expressiveness boils over and demands the lid be lifted where Welch just simmers.

It seems he needs the feedback. Welch, on the other hand, needs for nothing at all.

I bet most people zipped here in an Uber with free mints straight from their air-conned office job. That doesn’t stop us feeling the bone-deep fatigue of the guy in ‘The Way It Will Be’ who is “working the lowlands door to door, like a Latter Day Saint”. Hell no, let’s role play! Welch inhabits her songs with such immediacy and conviction that we do too – along the way finding all sorts of surprising empathies with her characters.

When they play ‘I’ll Fly Away’ from the O Brother Where Art Thou? soundtrack, damned if I don’t clap and sway in gospel rapture alongside all the other heathens here. “Matthew, Mark, Luke and John/They’re gone but not forgotten!” I holler, though I’m not quite sure who these guys are if not a roll-call of names from my Year 6 class.

Welch has several pearly gate-related songs but she’s no Christian square. Boil it down and her music’s marrow is sex and death.

Like her Americana forebears, she taps working class grit for inspiration – but with less romanticism. Her best-known song ‘Everything Is Free’ is about the rags to riches trap but also about falling through the cracks emotionally – as well as economically. It’s about the psychological grind of selling your labour –“I can get a straight job / I’ve done it before / Never minded working hard/ It’s who I’m working for” – and what happens when you just give the fuck up. When the American dream becomes mired in apathy, revving pointlessly, wrung out real slow how only Welch can.

Welch and Rawlings are banter pros. “Boy have I been places since I saw you last,” Welch says by way of introduction. “Across the Nullarbor, for one. It’s a big place, don’t you know?” Neither too little, nor too much, and all of it adorable. Even when gags are repeated both nights like Rawlings’ intro to ‘Tennessee’, a song that “starts off slow and really fizzles out”.

Welch is in the “painful stage” of breaking in a new pick. “You might think that’s a non-event but I only do it every seven years. You may well ask ‘Why retire the old pick?’ Fact is, it gets a little stubby. And no, you can’t have it.”

On Monday, the third encore takes people by surprise. The duo come to the edge of the stage to sing ‘Long Black Veil’ unplugged. Even those who can’t hear a damn thing or see up a single nostril get weepy. “This is the first song we wrote together,” Welch says. It is the ultimate generosity. Three hours of them giving to us and they know we’re satiated. The only way to extract a bit more bliss is if they pretend we are giving to them: witnesses to their nostalgic moment.

Seeing Welch play quenches a longing you didn’t know you were carrying around.

“I could have listened to those slow, smacky songs all night,” a friend says. It’s true. Her most entrancing songs are the sluggishly-paced simmerers but by verse one, you’re all in, hanging on every word.

She is dark, real dark. As she glides between genders on the sultry ‘Tennessee’ you realise she is navigating the grey zone of free will in a messy relationship. “But of all the little ways I’ve found to hurt myself / Well you might be my favourite one of all.”  And on ‘Dark Turn Of Mind’ you realise it’s not just about depression but also the abuse that preceded it.

Live, her songs have a weird way of making sadness feel like bliss. Of making even death sound divine. The cliché “I could die happy” is flipped because multiple times tonight I feel I could die sad and that would be OK too. It’s one of the most liberating revelations I’ve ever had at a gig.