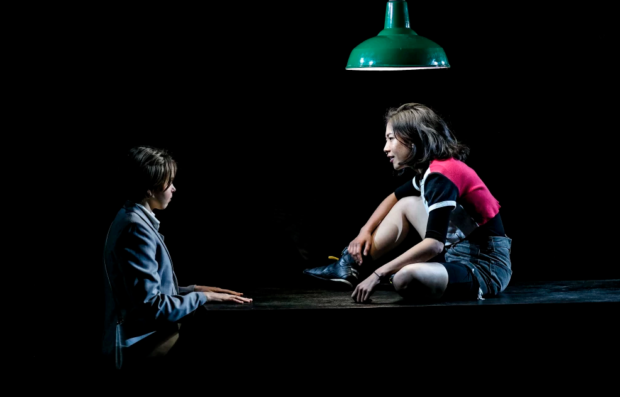 Girl In A School Uniform – Terror lurks on the edge

Kings Cross may be quieter these days but sirens still blare outside during Girl In A School Uniform. Or is it the play’s sound design?

It’s hard to tell because UK writer Lulu Raczka’s action is set in a bar amid streets steeped in sinister mayhem: blackouts keep happening and, during them, women keep disappearing. “It’s the future,” reads the program. “But only slightly.” The dystopian setting brings to mind the bleak intensity of British television series Black Mirror. So does the dread. It’s there from the start, when a thump in the hall terrifies bartender Bell (Michelle Ny). The noise is schoolgirl Steph (Caitlin Burley) who’s come to ask about her missing friend, Charlie.

A game of cat and mouse begins as Bell, played fiercely by Ny as a streetwise antagonist who drip-feeds information to Steph, a privileged truth-seeker. Bell’s flippancy seems cruel until her inner world of fear and isolation is depicted in a series of short, wordless scenes.

Both women need each other, especially when the play takes an experimental dive by plunging the theatre into blackout, too, and re-centering the action on a kind of vigilante role-play.

The play’s most explicit theme is the ugly intersection of class, violence and justice. Looking at Steph’s private school uniform, Bell says “Girls like you actually turn up on the news when you go missing”. In a succinct condemnation of how people’s sense of justice flares when it’s their kind at risk, too, Steph counters “Even girls like me don’t make the news any more.”

Raczka has a way with such phrases. The line “with all that’s going on” is used ad nauseam to explain why women’s deaths don’t matter. Each repetition renders the phrase a poorer excuse, with the civic meltdown cast as a diversionary war in which violence against women is seen as a lesser concern.

“Thirty-five women have been killed violently in Australia since the start of the year,” writes director Hannah Goodwin. “This production holds space for them.” That space is darkness, a tool Goodwin wields in the same way a photographer uses negative space or a composer uses silence.

Despite planting a whodunit urge in the audience to know the truth about the missing schoolgirl, the play stubbornly unravels into metaphor and mystery until its very open-ended end. No single play can answer the problem of male violence yet I’m not sure it should pose this many unanswered questions, either.