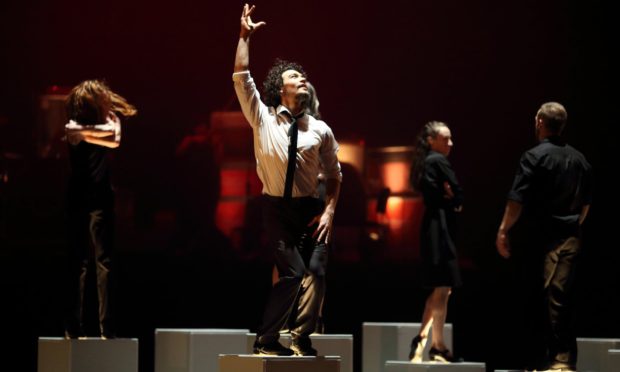 First published in The Guardian, March 2016

Post-rock is a loudly ponderous, insistently serious kind of music: all brooding soundscapes, apocalyptic themes and long, instrumental songs that are fanned into vast fire-fronts of noise. Everything emotes.

Once I thought it to be very important music. But the drama that sucked me in eventually spat me out. At a gig, I found myself furiously agreeing with a guy who yelled “crescendo is cheap!” I had chewed the colour and flavour right out of it. Post-rock all tasted the same. Formed in Montreal in 1994, Godspeed You! Black Emperor takes post-rock’s tropes to the hilt. They answer interview questions as a collective, play in the dark and have song names such as Piss Crowns Are Trebled and We Drift Like Worried Fire. So why, then, did I so thoroughly enjoy not one, but two Adelaide festival events featuring them?

The first was a dance piece called Monumental by fellow Canadians, Holy Body Tattoo. When it was originally performed in 2005, Godspeed was on hiatus so the piece was scored with the band’s recorded music. When Godspeed reformed in 2010, Adelaide festival director David Sefton saw his chance to have some chats and align some stars. Thus, Monumental was resurrected – this time with Godspeed live onstage.

Choreographers Dana Gingras and Noam Gagnon are known for pushing dancers to their limits. Only then are the body’s secrets truly illuminated, they say. Still, you think, this is contemporary dance. The abstract and the ambiguous is a given.

Not at Monumental. Its language is direct and confronting. For most of the show the dancers stand on individual pedestals, sometimes gesturing like Communist dictators but more often than not, suffering. They twitch, scratch, pant and cower, knead their aching shoulders and tear at their hair. Even poses suggestive of yoga, tai chi and prayer are repeated joylessly; it is an exhausting drill.

An A to Z of disorders is insinuated: anxiety, anger management, obsessive compulsive disorder, paranoia, Tourette’s syndrome and Trichotillomania (where people pull out their hair). The duets speak of intimacy troubles and betrayal. Lord of the Flies springs to mind during the ensemble pieces. The dancers jerk, lurch, run in mindless circles and trip each other over; marionettes to a spiteful puppeteer.

It sounds unpleasant but it is electrifying instead. Watching Monumental is like holding on for dear life to a power line downed in a storm that keeps thrashing and sparking. Jenny Holzer’s existential text art escalates the onslaught of ideas. Her observations glow on screens, such as: “Even with your eyes closed you can see someone approaching. His shadow shows on the inside of your eyelids.”

The show is not without dated moments, such as time-lapse photography of clouds and highways – but why look when below the screen a dancer is in freefall? Monumental’s maximalism gives you no reason to focus on the parts you don’t like.

Which brings me to Godspeed You! Black Emperor, who play at rock-show volume in a theatre that offers no earplugs because it has never had to. The governor of South Australia is here and perhaps other dignitaries too and there is an odd texture to the closing applause. Some patches are thunderous; others are sputtering. It’s the sound of a polarised audience.

I’m sure this would please Godspeed. Surely they did not want to please each and every patron and corporate sponsor? This is a band associated with anarchist politics who were famously (and erroneously) arrested as terrorists while touring America in 2003. They revel in their outsider status and terminal disenfranchisement, and once said: “Turn on the radio, and it’s a fucking horror show. The things our governments do in our name, just to fatten themselves on our steady decline.”

Godspeed’s rightful place in this dance piece is a revelation though. It seemed unlikely their massive drums and sad, soaring crescendos could score such frantic dance moves, but there is synchronicity even during spoken-word piece, Dead Flag Blues. Moments when it all comes at you – the dance, the words and the music – are like diving too late into an enormous wave and getting swept up in the surge.

And it’s always a joy to hear a band preach to the unconverted. Dance attracts a wholly different audience to epic post-rock gigs. But because Monumental’s themes on the perils of individualism and neocapitalism are aligned with Godspeed’s, the band has reached a mainstream audience with integrity intact. Perhaps more late-career post-rock acts could find a place doing something similar?

Godspeed’s show on Sunday night, by contrast, is great for more obvious reasons. Band members mosey out one at a time and sit in a circle, facing their foldback speakers. They play for two hours with no encore and not a work spoken.

Kudos to the Thebarton Theatre (also the venue for Unsound) who mixed the sound so well – advisable when there are four guitarists, two drummers, a double bass and a fiddle. The mighty riffs of Mladic from Godspeed’s 2012 record Allelujah! Don’t Bend! Ascend! would alone have been worth coming, as were the doomsday visuals, wrangled in film reel by a guy behind the sound desk.

Post-rock may not find a place on my home stereo anymore. But live, and in the hands of a band that created many of its formulas to begin with, I could surrender to a sound I once loved.