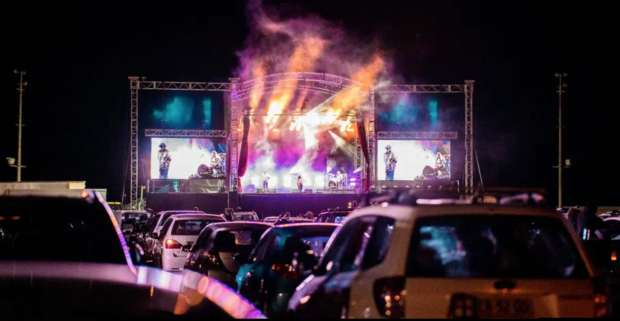 If drive-in concerts could make enough of a buck for concert promoters to pursue them (they can’t), Wollongong band the Pinheads’ appeal on Friday to “give us a beep!” would go down in Australian music history. Hundreds of hands are slammed on horns in acquiescence. A song later, a sheepish correction: beeping, bad.

Too late! Spirits are high in this wind-whipped Bulli field where 400 cars are parked side-by-side blasting the stage audio via FM radio, and appreciation must be shown. (Clapping in your car feels super weird. Cheering, even weirder.)

Hockey Dad’s Alive At The Drive-In concert was meant to happen on 31 July, the day that their third record, Brain Candy, which debuted at #2 on the Aria charts, was released. The gig was postponed on 29 July for a ye olde reason – rain – but it still felt like a twist of the pandemic’s knife. Minutes later, Queensland announced its border would be closing to greater Sydney residents. Ah, July.

I texted my teenage twin nephews first; my plus ones for Hockey Dad. All of their birthday and Christmas presents had been tickets for their first year of gigs – all cancelled. I spoke to mum next. My uncle had been sick during lockdown but, instead of dying, he survived, and was turning 80. Mum had flights to Brisbane to see him. Not anymore. 2020 had dished up worse but I realised that day how rough pandemics are for older teens and seniors in what is a fleeting time of firsts and lasts.

So the fact I’m here, 10 weeks later, with three 17-year-olds, waiting for burgers, fries and Coke to be delivered to our car, already feels like a win. “They should have milkshakes,” says my nephew, Luca. “Yeah,” says his girlfriend, Hannelore, “Milkshakes would really pop off.” They know about drive-ins from TV shows such as Stranger Things. Same for the young Hockey Dad duo of Zach Stephenson (singer and guitarist) and Billy Fleming (drummer). “We’ve never been to a regular drive-in theatre before so we have no idea what’s going on!” Stephenson told Nine newspapers in July.

It’s probably the salty air and seagulls. Or the Kombis with surfboards strapped on top, their fins silhouetted against the twinkling escarpment. But every inch of this event feels like a Wollongong affair: loose and sunny-spirited with zero scenesters.

Hockey Dad is from the tiny nearby town of Windang and “the gong” is proud of them. And while tonight has the scale and professionalism of a large promoter, it’s put on by the band’s label and Wollongong festival-runner Farmer & The Owl, whose efforts have gone a long way to reinvigorate the music scene here, as it’s become increasingly common for touring acts to leapfrog Sydney for Newcastle and Wollongong.

“While Sydney’s nightlife was in a downturn thanks to the lock-out laws, other cities in NSW picked up the slack and few did it better than Wollongong,” says Larry Heath, director of the National Live Music awards. He moved the NSW event here in 2018. “As travel grinds to a halt, Wollongong is an example of what regional centres can be doing for live music.”

Between bands there’s the premiere of a surf doco called Rage. It’s about travelling around surfing and “having heaps of wicked fun”, the filmmaker says. The soundtrack features a lot of the heavy stoner rock Wollongong was known for in the 90s, I tell the teens. But they’re all on Snapchat.

We take a stroll during Hockey Dad’s set. Walking past the cars is like seeing the equivalent of the twist and fizz of a tinnie being opened: relish, pure and simple. Lit from within, the cars are miniature frames of delight as live music-starved punters are satiated. It helps that Brain Candy is a wickedly good record, leaning harder into the duo’s heavier Nirvana influence, with an astringent Sonic Youth guitar sound on zeitgeist-tapping songs such as I Missed Out. “I missed out all the good stuff/I went through the wringer/I missed out on so much.”

One van’s interior is draped with fairy lights, smoke puffing from the back windows. Fans hoist themselves on to windowsills, torsos poke from sunroofs, and people drum joyously on car tops. Unlike a regular gig, no single off-key chorister can ruin the band’s sound – because 400 cars have it cranked.

While it seemed that drive-in shows may end up as part of the Australian summer festival season, Farmer & the Owl’s Ben Tillman says that’s unlikely. Not only is there “no money it it”, he says, everything was different when this show was planned months ago. “Then it was like ‘we can’t get the entertainment any other way’ but other options are becoming available now. We’re seeing this drive-in show as a bookmark for this real weird time in history.”

In our car, my nephew Aki has EQed the stereo so it’s perfect for Hockey Dad. He likes it bass-heavy and we laugh that he can put “live audio engineer” on his CV. It’s a good time. These teens only have a single other gig under their belt to compare it to so a drive-in concert is as normal as anything else.

In place of horns, the crowd starts using hazard lights as applause. A silent, orange, blinking nod to the joy of being at a big gig again. No one suggests it over a PA – the hivemind just drifts, together, into this new gig tradition and symbol of music’s adaptability as new ways come to pass. Add it to streaming, seated gigs and the myriad ways music has heroically pivoted in Australia during the pandemic.