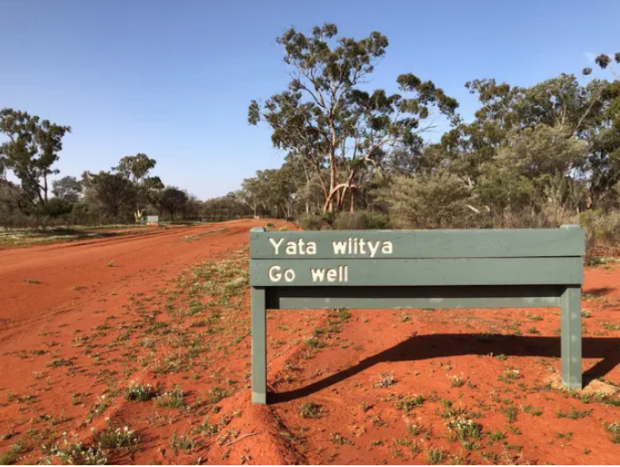 Borders are closed but Australians are still travelling, swapping our top three destinations of New Zealand, Bali or the United States for our own backyards instead.

Yet in this year of domestic travel, Australia’s majority non-Indigenous population should remember these aren’t “our” backyards. Indigenous sovereignty was never ceded, though this truth is not made plain. In preparation for our trip around northwest NSW, and on town plaques while on the road, we see  the phrase ‘Aboriginal history’ a lot, locked in past tense. What about the present, you might wonder?

In pandemic times, demand is up for vehicles in which people can BYO bathroom, bed and kitchen. We sourced a motorhome through CampToo, an online service that connects road-trippers with privately owned vehicles. Ours was equipped with solar power, meaning we could stay in ‘primitive’ (non-powered) sites. My hesitations about taking a pre-loved vehicle evaporate when its owner demonstrates how to operate his professionally cleaned Volkswagen, saving us the trials and errors of an enigmatic rental.


In a regular car or a 4WD, your itinerary may  differ to this – notably, you’d have better access to National Park campgrounds and to experiences such as Lightning Ridge’s pubs in the scrub, down a dirt road.  View this loop of northwest NSW as a choose-your-own-adventure and this story as the highlight reel of ours.

Sydney to Dubbo via the Golden Highway
(6 hours)

My hesitations about taking a preloved vehicle evaporate when its owner demonstrates how to operate his professionally cleaned Volkswagen, saving us the trials and errors of an enigmatic rental.

Our ride has no name. Which is rare among the motorhomies, with vehicles called King of the Road (Drifter Series), Hobo Heaven or Dreamseeker Spirit 4. As the city’s stresses slough off, noting the names becomes one of several lazy pastimes this trip heaps in healing doses upon us.

We take the Golden Highway to Dubbo, its roadside iridescent with yellow canola crops. In Dubbo, senior Wiradjuri elder Peter Peckham drives us to the Native Secrets family farm, owned by Bidjara and Kara Kara man Phil and his wife Cherie. They thin out bushland overgrown with white Cypress pine and use it to make essential oils and other beauty products. As the sun sets, we peel the feathery bark off clapsticks and share a camp oven dinner: rich sausage stew followed by golden syrup dumplings.

Around the fire, stories flow. Phil, practiced in jujitsu, tells us about a traditional Aboriginal form of wrestling called “coreeda”, based partially on the red kangaroo’s “oldest wrestling method of all time”. Peter tells us about the boomerangs found in Tutankhamen’s tomb. He should be in Cairo this month, participating in the opening ceremony of the new Grand Egyptian Museum but, Covid. “Peter Peckham?” says Phil, admiringly. “Legendary world traveller.”

Dubbo to Narrabri via the Pilliga
(3 hours)

“The Pilliga” in Gamilaraay country is Australia’s largest remaining native forest. Misty rain is falling when we meet ranger Bernadette Lai at the sandstone caves loop walk – and she couldn’t be happier. “The Pilliga is known for its flowering season but it skipped the last few years because of drought,” Lai says. The wildflowers pop bright and glossy in the wet: hot-pink boronia, fluffy yellow wattle, the origami of purple pea and a few elusive orchids. Carnivorous sundews grow in damp spots here too.

At the request of elders, the caves are not signposted and a discovery tour ($15) is recommended. Sacred scar trees are dotted through this ancient landscape and the kangaroo and emu footprint etchings in the caves are up to 12,000 years old. I learn that national parks are dedicated to humans’ enjoyment but the welfare of plants and wildlife is put first in nature reserves. Pilliga nature reserve is often closed in August, for example, to allow the peregrine falcon to nest in peace.

Narrabri is the inland halfway point between Melbourne and Brisbane and when we arrived it was still reeling from a winter influx of pre-lockdown Victorian motorhomes fleeing for Queensland. When the town’s caravan parks filled up it opened the fairgrounds to accommodate the travellers. Like every town on our trip, Covid measures are strict with non-negotiable sign-ins and hand sanitiser on entry.
Don’t miss: The Sculptures in the Scrub walking trail and Pilliga Pottery
Eat at: Narrabri Tourist Hotel
Stay at: Narrabri Big Sky caravan park

From the summit of Mount Kaputar, a national park in Gamilaraay country, Narrabri locals say you can see one-tenth of NSW. I’d rather see the rare fluorescent pink slug so we head to Sawn Rocks instead. This spectacular, volcanic rock cliff has eroded into what looks like a pipe organ. Beneath it, hexagonal shards have crashed into the bush, resembling a Roman ruin, mouldering into antiquity.

Meanwhile, NSW’s network of seven artesian bore baths is a revelation. Because the baths are hot and healing they’re a hit on the grey nomad trail. Council-run, utilitarian and stubbornly un-Instagrammable, they’re also a reminder that luxury can come for free.

Our baptism at Burren Junction is an extremely rural experience as the baths’ denuded red earth is smack in the middle of fields that may be cotton, chick pea or wheat. My crop ID skills are bad but I know an octogenarian holding a pool noodle when I see one. We get pruney in the sulphurous waters together; both a literal and a cultural immersion.

An hour away, Walgett’s baths are less anarchic, fenced off in tidy Apex Park. Road trains stuffed with hay thunder by as we soak with a local guy and his toddler. He’s a footy player and a farmhand and both warrant a daily soak. “Lightning Ridge’s baths are better,” he says. “Hotter. Everyone’s friendly. No one cares what colour you are.”

The sign in Alex Trevallion Park – a “primitive” campground on Walgett’s outskirts – documents the 1965 Freedom Ride: the civil rights bus tour of rural NSW led by Arrernte man, activist and University of Sydney student, Charles Perkins. Its efforts to highlight racial injustice boiled over in Walgett when the bus was run off the road by a hostile convoy of cars. The Dharriwaa Elders Group made this sign in 2015 so “the Walgett community will not forget”. But has the rest of the country? Walgett could be considered the civil rights equivalent of Selma, Alabama, yet a marble monument to the soldiers of the Great War occupies the main junction, soaring above town.

Driving to Lightning Ridge, we clear the farming belt for the big-sky outback of Yuwaalaraay country. “There are Dreamtime stories that talk about the creation of opal,” the Australian Opal Centre notes. It’s all about opals here. While miners mine, tourists are kept busy doing colour-coded self-drive tours. Essentially, you fang down either the blue, green, red or yellow route and pop out at whichever (largely opal-themed) attraction appeals, advertised by a car door jammed in the dirt.

At our campground’s firepit, near the Willy (not Nelson) Pavilion, we roast marshmallows with some kids whose dad says the tourists who disembarked the Black Opal bus yesterday were “pissed as nits”.

The tour goes 40km into the “moonscape” to pubs in the scrub, a circuit we regretfully save for next time (our motorhome can’t do long dirt roads). That night, our courtesy bus into town hammers down a dirt road to return a pub punter to a cottage made, seemingly, from tin and a few venetian blinds. Turns out he owns the walk-in mine. You keep your bank balance quiet in remote Lightning Ridge – or get a dog.

(2.5 hours)
As we enter Brewarrina – known as “Bre” – even our Telstra phone reception goes dead. Our off-grid afternoon is spent on a sharp bend in the Barwon River at the isolated jetty at Four Mile Reserve. Sunlight glints off the water, gliding across the knotty gums above. Birds most commonly seen in cages, budgerigars and cockatiels, fly wild and free here, screeching and swooping above with galahs, finches and a restless flycatcher or two. At dusk, a sole squat pelican floats ostentatiously by.

Bruce Pascoe’s 2014 book Dark Emu renewed attention to Baiame’s Ngunnhu (Brewarrina fish traps), which are described by some as the oldest human construction in existence. These still-working stone traps, and their associated ochre pit and burial grounds, are linked to the Ngemba, Ualarai, Morowari, Kamilaroi, Baranbinja, Weliwan, Kula and Koama people.

Tour guide and Ngemba man Bradley Hardy stresses the traps’ significance but is wary of categories such as “oldest” and how it frames antiquity as a competition. “Our old people taught us we don’t own land, we belong to it,” he says, gently but firmly shifting the perspective. “They shared land, they shared waterways. We shared everything. That’s why we’re still here.”

Bourke is 760km from Sydney. Taking in the milky green of the Darling River on the Jandra paddle steamer is a popular outing, but we meet Kooma man George Orcher for a cultural walk instead. Talk with any Indigenous person in north-west NSW and other places will come up too, such was their dispossession from their homelands. Raised in remote Weilmoringle, George was the only one of 10 siblings to go to boarding school. “I still became a shearer like my dad and my brothers,” he says.

By the 1880s, Bourke was the world’s largest inland port for wool export – even Henry Lawson swagged and sheared here a while. George’s record was 204 sheep in a day. His dad did 327. “It would have made the Guinness Book of Records but he was Aboriginal so he couldn’t claim it,” George says.

Early the next day we drive an hour from town to the unmissable Gundabooka national park on Ngemba and Paakandji country. There, our senses are stuffed deliriously full of red earth, purple-blue sky and a wealth of wildflowers. “This is stone country,” an entry sign reads, but it’s far from arid with Pillaga posies carpeting the scrub in abundance. Exiting, another sign, just two words. “Yata wiitya,” it reads in Ngiyampaa language. Go well.

We return to Sydney via Nyngan Riverside Tourist park on the banks of the Bogan River.

Guardian Australia was a guest of Destination NSW and Camptoo