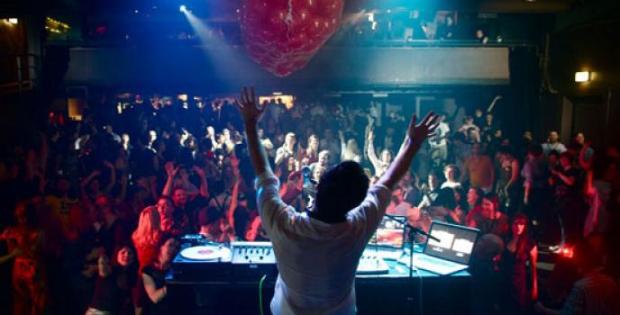 The concept of Hot Dub Time Machine (®) is this: at midnight shove a club full of people, spin some tunes from the 50s so they can ease into things by partner-dancing, then race through the 60s, 70s, 80s, 90s and naughties with snippets of smash hits from every year. Will they dance themselves into a froth? Hell yeah!

The other part of the concept is that if people don’t dance hard enough, Sydney DJ Tom Loud pauses on songs from that year until they do. This doesn’t really happen though. Loud’s been manning this mayhem for three years now and is inured to any inklings of “meh” in the frenzy of fun before him. But really, fuckit, there aren’t any. People are loving it especially when a net of balloons on the ceiling is set free to ’99 Luftballons’ in 1983.

Occasionally Loud lingers on a track – like ‘Living on a Prayer’ (two minutes of ecstasy for me because I can do Johnny and Gina) but mainly, the show goes at such a speed we miss the whole disco era sharing a ciggie out the front.

The ‘80s and ‘90s are the funnest: tunes from 2000 onwards haven’t marinated in popular culture as long … and besides, Loud doesn’t play Gorillaz or Outkast which seem like total naughties no-brainers. Skipping tracks after 30 seconds or so gets tiring too but the iTunes and YouTube age has conditioned us well.

With a carb-loaded dinner, a few beers and some uninhibited friends in tow, Hot Dub Time Machine is like a house party dance-floor: impossible to resist, especially at midnight on a balmy Saturday night.
Buy lortab