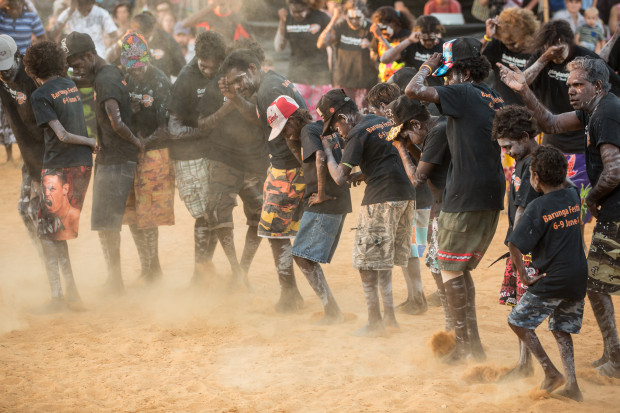 “My father from the sunrise but my mother a saltwater woman.”

On paper, the words have a kind of epic poetry, but that’s the opposite of the way they are said, muttered even, by an elder of the Dalabon clan called Queenie. She’s sitting amid a sea of upturned white faces, mine included, eager to learn some of her language.

I’m one of a few hundred “whitefellas” far outnumbered by “blackfellas” at an indigenous festival four hours south of Darwin in the Northern Territory. Now in its 28th year, Barunga is Australia’s oldest and largest remote-community festival. It peaked in popularity in the 1990s but declined in recent years and, last year, nearly collapsed. It has been reinvigorated this year by new management: Darwin record label Skinnyfish Music. Skinnyfish also manages Australia’s most popular indigenous musician in decades, Geoffrey Gurrumul Yunupingu from Elcho Island off the coast of Arnhem Land. Blind since birth, Gurrumul sings in his first language, Yolngu, yet he’s played for the Queen and President Barack Obama. He’s headlining here tomorrow night and the buzz is tangible. A young linguist sits by me. “What other American gets to do this?” he says. “Come to an Aboriginal community and see it authentically?” I ask why he’s here alone. “Most Americans go to Europe to see the cool historical buildings. They don’t see the history here; they see Australia as a new country.”

Barunga ladies Anita and Queenie arrive late, harried, with three skinny-shinned, bright-faced boys in tow. They explain that the festival also serves as a family reunion and they’ve been busy with important matters. The tent murmurs its forgiveness.

The lesson becomes a Q&A covering a sprawl of issues. One woman confesses, with a note of anguish: “I don’t know how to approach Aboriginal people.” A German traveller with a notepad gets things back on track, pressing for more details on kriole, a language spoken widely in the Northern Territory as a common denominator across the many tongues that exist, or existed.

A swell of curiosity draws Queenie and Anita into discussing aspects of kinship structure that would baffle a seasoned anthropologist. Poison cousins are “the most difficult relationship” says Anita. The term poison denotes any relation an Aborigine must avoid. “We can’t face [our poisoned cousin] or look them in eye. A wife can’t look at her father-in-law, ever, or even be in the same room.” Cue quizzical looks. “Why?” a girl hazards. “It’s part of our culture. Poison cousin is still very strong.”

There’s a pause into which the sound of the river flows, then a gust of wind that makes leaves shimmer and spin. Land, animals and ceremonies are part of kinship structures too, Queenie says, and “skin names” dictate marriage, hence the father from the sunrise and the mother a saltwater woman. Wearily she gestures north and east and says little more.

I’d spent time in this open-sided tent last night with the paper bark’s ragged trunks pressing in. In the evenings, there’s a fire-pit, acoustic music and fairy lights mirroring a blanket of stars that bear down on us barely past dusk. There are also lessons for those who want to hear. “Things go wrong when you throw away your teachers and stick them in another house,” singer Tom E Lewis told us the night before. Elders are crucial in Aboriginal communities and their loss can be devastating.

On the dusty path up from the river are two installations of Mimis (Aboriginal spirits), diaphanous in the sun. June is winter elsewhere in Australia but in the tropical “top end”, it’s dry season to white Australians and, to the local Jawoyn people, poised between the seasons of Banggarrang and Malapbarr. All of which translates, at least today, to weather that’s supernaturally gorgeous.

The 400,000 sq km of Australia’s “top end” encompasses treasures such as Kakadu national park and Katherine Gorge. The words to me, shrug off but don’t suppress a fear of the uncharted land that Australians have inherited from the country’s first settlers. Before them, this area was intersected by tribal nations and anchored by sacred sites. Now its name sounds like a hand waving over a map: the top end, all that up there …

In Barunga’s central park a local lady is weaving baskets from pandanus leaves. She wears the baggy T-shirt and long skirt favoured by indigenous women here and demonstrates, rather than dictates, to chatty white women. Nearby, white men have paid $50 to labour over their own didgeridoos, stripping and sanding termite-hollowed logs. And why not? Festival tickets are just $30 (around £18), camping is free, and drinking water flows fresh from taps. It seems almost incumbent on those with plumper wallets to contribute a little more.

Slide guitar virtuoso John Butler is headlining alongside Gurrumul tomorrow. His name has attracted many white visitors, mostly from Darwin, and that has left festival co-ordinator Michelle Wild a little fretful: “We need to be careful Barunga’s not a victim of its own success.”

Skinnyfish managing director Mark Grose is more direct: “If this turned into a festival where everything was geared to please whitefellas, the Aboriginal people would just walk away.”

Suddenly, my reporter’s hat feels like it’s on at a silly angle. I’d planned to stress the festival’s importance on the cultural calendar for any Australian or visiting tourist – but would I be doing it a disservice if I urged more to come? Grose sets me straight.

“It’s not numbers as much as the influence they exert on us to change it. Previous co-ordinators tried to make this something more sophisticated than it should be but the community gets lost in that. All of the activities here are things remote communities love. We’re not going to change that.”

Near the football field is a dense pocket of stalls. From a distance, they’re merry with colour, activity, and workers in matching shirts. Closer in, they’re colourful in the same way flowers brighten a hospital ward. There’s the Department of Health (Alcohol and other Drugs), Jobfind, a mobile dialysis bus and the Family Violence Legal Service. Here, the word festival seems to be a misnomer bordering on a cruel joke. There are stalls on quitting petrol sniffing next to stalls on healthy eating; chemists give advice on meds and the Northern Territory Stolen Generations Aboriginal Corporation says it’s “flat out” all weekend, fielding enquiries about missing family members. It’s a long, bleak distance from the vice-peddling escapism of the festivals I usually attend.

The stalls, of course, are a microcosm of the issues facing communities across a vast region where the tyranny of distance is a big part of the problem. This festival of social realism is sobering, to say the least.

“Skinnyfish is not just a record label,” Grose explains later, as an ex-AFL star wanders by in a T-shirt saying “Get Active, Eat Good Tucker, Live Longer”.

“With all of our artists, there’ll be somebody sick, somebody on medication. Everyone smokes. We can’t just ignore the context. In terms of public awareness, [mainstream society] was at a place in the 1960s and 1970s with smoking, for example, where these people are at now. Music’s a vehicle for change and Skinnyfish has this incredible thing that engages remote-community people. This sounds a bit silly but … we’ve got to use it for good.”

As the sun sets that evening, traditional dance (bungul), didgeridoos and clapsticks launch the festivities. Dancers from Beswick – a community nearby – ask everyone to dance too and many of the same keen whitefellas I’d seen weaving and didge-making join in. Laughter fills the park through a haze of dust.

On my way to bed, I pass the squat, bunker-like houses of Barunga residents where extended family members move in and out of doors that never seem to close. The hullaballoo continues until late, joined by the lowing of buffalos – a pest across the top end. Curiously, though, I sleep soundly, possibly knowing that because Barunga is an alcohol-free community, there’s scant risk events will turn ugly.

The next morning, I run the gauntlet of what seems like thousands of kids throwing, kicking and bouncing footballs, and attend a church service, where Anita – seemingly everywhere – is delivering a curious mix of sermon, information session and choir practice in kriole and English. The church smells of mosquito repellent and the fans spin slowly as she tells the congregation: “God is using kriole and indigenous people to do his work. He gives us strength, especially us ladies.”

The day is filled with a spear-throwing competition, damper-making and the fun of watching nimble kids navigate a climbing wall. There’s comedy in the small moments, such as an excitement-filled AFL grand final, with young Aboriginal men leaping and twirling like ballerinas. There’s no scoreboard, so onlookers watch for the spectacle alone. There are moments of self-reflection too, like when I realise I’m asking other white visitors for information, rather than an indigenous festival-goer who’d more likely know the answer.

I leave early the next day. Accustomed to vast distances, Northern Territory drivers are notoriously fast but I’m spooked into slowing down by kangaroo tails, stiff with rigor mortis, poking out of the grass by the road.

I stop at an art gallery, Top Didj, in Katherine, and meet Manuel, a gentle Dalabon man whom I’d seen selling art at Barunga. We sit under a tree, drinking tea, and he tells me his story: “I was born bush and my parents they knew whitefella but didn’t want us to be taken away. Otherwise we might go to mission or to school somewhere down south. They were really scared, my parents, frightened, all the time, living in the bush, long way from Barunga.

“When I was about seven, me and my friends went swimming in the waterhole and saw a whitefella coming down, and it was the first time we’d seen white people. We was really scared, we run bush, the colour, white, you know? We thought he was a ghost or a Mimi spirit, the same colour like you, white.”

Manuel supplies cultural experiences at Top Didj now. His story for tourists stops, though, at a certain point, as though he senses they’re more interested in the traditional life he has all but lost than in the less romantic realities of the life he faces now. Privately, he tells me about the change he’s seen, from hunting for food, to earning money to buy it; from being an alcoholic “long grasser” (homeless), to hearing that one more beer would kill him; from letting his visiting family camp in the backyard; to telling them to leave for fear he’ll be evicted from community housing.

It’s been four long, hot days since I showered, so I take the 20-minute detour from Katherine to Nitmiluk, a national park of deep sandstone-carved gorges and waterfalls.

Five English tourists are sitting on the swimming ramp, enjoying the sun. One sees my wristband: “You went to Barunga?”

I talk passionately about why they should go too, next year. Then I dive into the gorge. When I emerge, they’ve moved on. “Have you heard of Burning Man festival?” the girl asks. “It’s in the desert, in America. They set up a whole city and burn it all after.”

Driving back to Darwin, past ancient termite mounds standing sentinel by the road, I think about the two festivals and realise my perspective has shifted. They burn it all after. Three days ago, I might have enthused about Burning Man, too. Now, the escapism and the waste of it just seems foolish and I hope that whatever was built at Barunga this weekend, both tangible and intangible, won’t be destroyed any time soon.