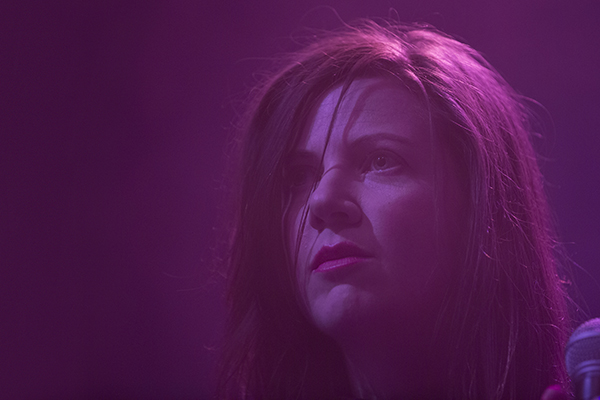 First published in The Quietus, June 2014

It’s the working week’s end in the city that hauls in a great hunk of Australia’s GDP and people need a drink. Instead, they languish in a switchback-style affair at the main bar or two-by-two in a queue snaking the length of Carriageworks’ foyer, failing to mask their fury with expressions of urbane zen. To be clear, the masses are here to see Pet Shop Boys. Though a head-start into one’s high of choice would be more productive for HTRK, who are supporting Liars in a smaller room.

HTRK are no support act. The duo isn’t in the business of “getting the party started”, or ensuring “a good time was had by all”. Their music has moved from its early abrasiveness to a shapeshifting haze of deep and dubby electronics but it’s still a heavy trip for 9pm. You’re all in or all out with HTRK, and the former state is easier in the later hours when the night’s remains are washing over you.

Well before its release in April, HTRK began exclusively playing tracks from Psychic 9-5 Club at (Sydney) gigs. Jonnine Standish and Nigel Yang’s routine is unvarying – no banter, no smiles, standing close yet not seeing each other. Despite this, each show has been different, and better, then the last, with Psychic 9-5 Club‘s minimalist tracks growing fleshier each time.

Their live sound is what I imagine it would be like to hear a sea floor – tidal, pulsating, immersive; sounds swelling and contracting like the swim of a passing jellyfish.   ”We’ve got no blue light,” Standish says. She’s not one to prattle, so its lack must be worth noting. And as the show progresses, it is. Haloed not by their usual anaemia of blue and purple but an aura of pinks and reds, the duo seem more flesh and blood themselves, their icy cool thawed.

There are new and old visuals. An affecting version of ‘Chinatown Style’ is played to parts of the video for the Mika Vainio remix of ‘Poison’ (from Work Work Work) and during ‘Give It Up’ the screen fills with footage of normal things made strange, and vice versa, the camera’s gaze regularly straying from its subject, reflecting the detachment HTRK embody too – as seen tonight in Yang’s preoccupation with his pedals and Standish’s horizon-stare, fixated on some point in or out of herself, anywhere but here.

But in HTRK’s detachment is a respect for the space in which their music can feel powerfully personal. Their songs offer so little explication or resolve, yet such fortunes of obscure meaning; they supply us with the raw materials to shape into our own emotional configurations. “I’m dying just to be here,” Standish repeats on ‘Blue Sunshine’, her words journeying from romantic to bleak and back again, finding no final resting place.