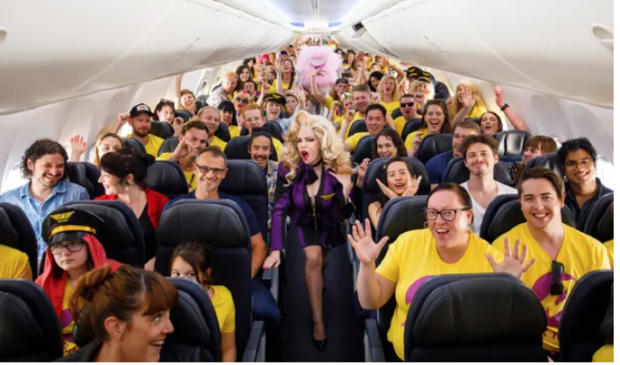 ‘I might get my boobs out’: aboard Air Mofo’s bonkers flight to Launceston

“How was your flight?” will have a new reply in future from the 150 passengers on board Air Mofo’s maiden trip on Friday. “Fine,” they’ll say. “But did I ever tell you about that bonkers flight I took to Tasmania?” When I pass them at Melbourne airport, I assume the young women in matching yellow tees are a boisterous sporting team. Then I see the purple Air Mofo logos. They’re from Brisbane and one wears a captain’s hat. “It’s because she won the tickets,” her friend says.

Last year, Mona Foma festival announced its relocation to Launceston from its Hobart home of 10 years. To entice mainlanders south, it ran a competition in which 25 people won a festival pass and an Air Mofo flight to “Launie” – then got to choose which five besties to bestow the same treat on. The festival mailed out the tees and hats with one instruction: wear them on 18 January.

Airports are rule-bound places where a joke can get you arrested. It’s no surprise, then, that a sacred cow-seeking festival such as Mona Foma – which this year used an eggplant emoji (texting code for a penis) as the cursor on its website – would want to chuck a party here.

The yellow tees carve an us-and-them divide between the winners in the lounge and the squares drinking coffee with the paper. Even I start wondering why I didn’t get a tee mailed out. “Did you?” I ask another journalist. “No,” he says. “They sent me a fully sick bag though.”

At the gate, things are running late. No one cares! Incredibly, Flying High(known to American audiences as Airplane) had been showing on my Qantas flight in from Sydney that morning and now I’m amid a hullaballoo of passengers on a brekkie cocktail buzz in tees saying: no one flies higher. “Who’s the pilot gonna be? Brian Ritchie?” a friend had guffawed a few days earlier when I told her about Air Mofo.

We board late, then idle on the tarmac for ages with the smell of exhaust wafting in. No one cares! The rows of six are more pumped by the minute and start cheering whenever anything happens; anything at all. The pilot’s apologetic platitudes, meanwhile, sound extra normcore. “Some days Mother Nature just doesn’t co-operate folks,” he says of the weather that’s reduced Melbourne airport to a single runway operation.

People keep standing up and you realise why airlines enforce so many arcane rules: if you pop the top on one rule, the rest come fizzing out. “Ladies and gentlemen you must remain seated,” says a cabin attendant. Twenty or so minutes later, she’s filming a dancer in a skin-tight sequinned body suit opening the overhead locker to briefly hump a bag.

The second performer, Rochelle, is dressed as a porny 70s air hostess. She does some opera through the intercom, then relays interviews she’d done with winners asking if they liked oysters.

Rochelle is performance artist Simone Page Jones and I’d been relieved to see her holding fort in the lounge. The arty aspect of Air Mofo could’ve been “what a hoot!” territory where people like me, who respond poorly to laugh cues, laugh only because we don’t want our resting bitch face corroding everyone’s iCloud account. Simone, however, is a long-term Mofo collaborator and one of the best. “I might get my boobs out!” she declares. Then, as a quiet aside, “They’ve got to come out at some point.”

When the real hosts trolley down the aisle – muttering something about having only 25 minutes to “do the whole service” – the cart seems to exclusively contain sparkling wine. On the Launie tarmac, I see a child and nudge the journalist from TimeOut. “That’s the bag that got humped!” We laugh – though, notably, we don’t cheer. If Row 7 is cropped out in Air Mofo photos, that’s because it was all embedded media in civvies.

Mona Foma curator (and Violent Femmes bass player) Brian Ritchie and acting mayor Danny Gibson flank the terminal doorway, shaking the winners’ hands. Gibson’s handshake is fervent, which is no surprise. Mona and its festivals have pumped millions into the Hobart economy and Launie must be hoping for a similar effect here.

In fact, Gibson appears giddy with enthusiasm. For his city but also for this strange moment he finds himself in, delivering a heartfelt speech to a totally amped sea of mainlanders. “Tell everyone you know this place is happening!” he says. “That Mofo in Launceston is the place to be!”

At the carousel, more booze. Someone’s handing out bottles of the brand new Launie Longneck Lager by David Walsh’s Moo Brew brewery, which claims on its label to be “massively Tasmanian”.

The whole day has been massively Tasmanian, I think. Tasmanian to the extent that these days I define Tassie by my twice-yearly trips here for Mona festivals.

Of course, I wonder if Mona’s irreverence will eventually peter out as people come to expect, instead of be surprised, by it. But for now, even a decade in, you can’t disagree with Ritchie’s statement to the Herald Sun last October. “We’re influential. We’re a celebration of raw creativity and uniqueness.”