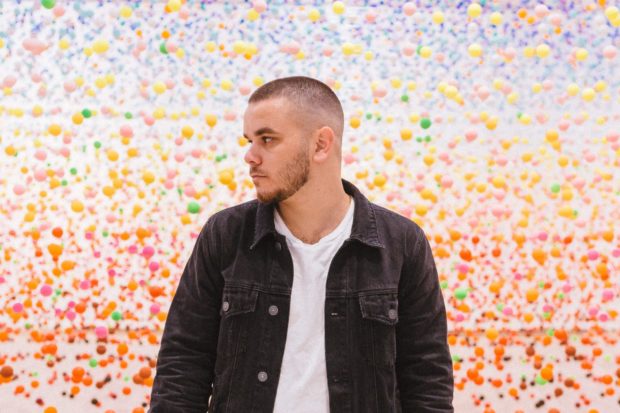 AS a kid, Gumbaynggirr man Tasman Keith thought everyone’s dad rapped. “That’s what mine did so I thought it was normal,” he says of his dad, Aboriginal hip-hop pioneer Wire MC. When Tasman moved to Sydney, he realised his dad was kind of a big deal. “People would say ‘You’re Wire’s son?’ and be amazed. I was like ‘Fuck, I didn’t know he knew this many people and did this much shit’!”

Tasman’s debut EP Mission Famous, out October 26, is care of some heavy-hitting talent. It was recorded in Darwin by ARIA-nominated producer James Mangohig in the Skinnyfish Music space dedicated to Gurrummul, Studio G; and produced by James alongside Nooky from Adam Briggs’ label, Bad Apples. Gurrummul’s long-term collaborator and Skinnyfish Music director, Michael Hohnen, piled in too, arranging live strings on ‘The Rope’ and playing double bass on ‘Divided’. It will be an independent release on Tasman’s own label Mission Famous Music.

The fact Tasman was first to record in Studio G is an honour that doesn’t escape him. “Gurrummul got to that place where musicians have such an impact, they don’t seem human,” he says. “I was so excited to meet him but sadly he passed away.”

I first heard him at Barunga Festival in the Northern Territory – from my tent a few ovals away. His set cut through the paperbarks and pandanus trees and we ended up on the same flight to Sydney. I liked his friendly but do-not-fuck-with-me air a lot.

At home I watched the video for ‘My Pelopolees’ and was hooked.   When we meet a few months later at his residential accommodation at University of Technology Sydney, I tell him I like that there’s lots of quiet menace in his videos and songs.

It’s Tasman’s voice that impresses most, though, because that’s something you’ve either got or you don’t; the x factor so many MCs are missing. Its grainy texture is smoothly delivered and loaded with a kind of coiled-up threat.

It’s strong and streetwise and makes you feel the same. Like you’ve nailed a few months resistance training and it’s just started to pay off.

“It’s not like I go out in the world and put on a front,” he says. “People say I have the same face as my dad when I walk around but I don’t mean it. It’s just how I walk around.”

As an Aboriginal man it’s possible he’ll be perceived as a threat no matter how he looks, I suggest. He agrees. “What’s that Tupac quote? The most dangerous thing is an educated black man? They should be scared of me anyway. I’m trying to make shit change.”

He answers my questions before I’m done, quick to grasp my intent and ready to quick-talk his reply, turning the interview into an animated chat. He’s 22 years old yet I discern no shred of naïveté.

“As long as I’m on stage … my music will be seen as political no matter what I’m talking about because I’m a black man on a stage in a land where they didn’t want us to be. Now I’m on a similar path [as my dad], I can see how he would’ve struggled to get his music heard. I have utmost respect for him in that way.”

RESPECT for his family and community is what the EP is all about.

Tasman is from Bowraville, a small town on the mid-north coast hinterland of New South Wales. Specifically, he represents Bowraville Mission, where most of the town’s Indigenous residents live.

You might know of the town already. “Write in Bowraville online and what comes up is the murders,” Tasman says, about the killing of three Aboriginal children in 1990 and 1991. The Bowraville murders were major headlines again last month when a NSW court ruled out a retrial of the man accused, then acquitted, of the murders.

“Obviously that stuff needs to be known but there’s nothing positive online,” says Tasman. “I wanted my cousins, nephews, nieces, all growing up, to write in Bowraville or Bowra Mission [Bowraville is ‘Bowra’ for short] and have something come up to be proud of.

“The mission name itself comes from a terrible time but now there’s a sense of pride in it,” he continues. “It was set up segregated, when blacks couldn’t live with whites, which is sad as fuck but now it’s like, OK, the mission is a place of family. We’ve taken control of that spot and it’s our home.”

Tasman lived in “the mish” as a kid and moved to Sydney when he was seven. The family moved between the inner-city suburbs of Redfern, Erskineville, Saint Peters, Sydenham and Marrickville, trying to stay financially afloat. Tasman’s first rap group formed when he was 10 years old, with his brother and cousin. It was called the Dotti Boys, after a historic place in the mission called Dotti Hill.

They moved back to Bowraville when he was 14. “Mum fell pregnant with my sister and they wanted her to be raised on Gumbaynggirr land,” he says

“I was a mad city kid and didn’t want to go but I’m so glad we did because I met a bunch of cousins and uncles I didn’t know I had. There was this spot called the Digi Hub, a studio and internet cafe. The studio was tiny with old carpet on the walls that stunk. Every afternoon we’d be in there making rap songs.”

Gumbaynggirr country is beautiful, he says. “You’ve got fresh water in Bowra and drive 10 minutes to Nambucca Heads and you’ve got beaches. When you get to your late teens, early 20s, there’s nothing to do though … no jobs. The only jobs are if they’re doing road work and that doesn’t last forever.”

The region is “mad farmy” he says but shrugs when I ask what kind. “No blackfellas owned farms. We’re still on the mish.”

Which brings us to the slang strewn across the EP. There’s “mission whips” (old cars) and the chant of “C-R-B!” booming from ‘My Pelopolees’ (CRB is a graffiti tag that stands for Cemetery Road Bowra; the mission is at the end of that road).

There’s the family he raps about, too, real people with fictional-sounding names like Uncle Spits and Billy Jack. Billy Jack is Tasman’s grandad and his voice is sampled explaining: “The word Pelopolees comes from my brother Spits. It’s just the word ‘people’ jumbled up. People, Pelopolees, same thing.”

Billy Jack recorded a song called ‘My Pelopolees’, too, in the early 2000s. Tasman played it to James Mangohig who dug it and asked if the song ever found an audience. “I said ‘nah it’s just famous in the mission, it’s mission famous’. And James was like, ‘That’s your EP: Mission Famous.’ That turned into the inspiration.

“There are lots of songs we all know on the mish, great songs, but not known anywhere else. They’re mission famous. I wanted to take the spirit of that into the EP.”

I think of the praise heaped – deservedly – on British grime artist Skepta for reclaiming London street slang and that Tasman’s practice is similar. Only his slang and stories are not sourced in a city of eight million but in a small part of a small town built close to a cemetery where black Australians are still buried separately to white.

THE EP launch party will be in Tasman’s family backyard. Barunga Festival was part of the inspiration.

“I’d never seen a main stage being all Aboriginal artists,” he says. “People travelled all that way to see certain acts and it made me think if it can happen in such a small community, it can happen somewhere like Bowraville too.”

Even in Sydney, Tasman’s community is behind him – literally, at times. His cousins, uncles and aunties came from far and wide in mission whips and on buses to the Botany View Hotel in August 2018 for the ‘My Pelopolees’ single launch and swarmed the stage to sing it in numbers that surprised even him.

The video, meanwhile, was all shot in Bowra. When the director suggested a nighttime football field shot, Tasman went straight to his old coach. “I said, ‘Can we get all those lights on tonight?’ and he’s like, ‘What time?’ I went down to my Uncle’s place at, like, 10 in the morning, knocked on his door and said, ‘Can you come and do some donuts in your car?’ He had his coffee and toast and was there in 20 minutes.”

Those uncle names, hey? “Yeah,” he says. “There’s Uncle Squid, Uncle Fish and Uncle Gak. Uncles that have passed away, too, like Uncle Spits, Uncle Nuts, Uncle Corn, and plenty more. I hope when I get older I have a mad uncle name.”

I don’t doubt he will. It took Skepta, now 36, years to learn to stay true to himself and to his sound and talk about things people didn’t want to hear – and he won a Mercury Prize.

At 22, all that seems second nature to Tasman. He’s unafraid to write lyrics that are dark and real and given many Indigenous leaders are uniting in calls for truth telling as part of the Uluru Statement From The Heart, truth is very much of its time.

There is, “We still waking up poor, belly’s empty/What’s the reason we say fuck the government? There’s plenty”, on ‘The Rope’; “Our death always contest, better with the vest strap on our chest/Our death always complex, fuckin’ on us with no consent” on ‘My Pelopolees’; and “I overcome the odds just to even out the score/I’m at the point where my dad was before” on ‘Death Into Life’

And while Tasman is dedicated to success – dedication drips off him, in fact – he’s free of its stresses too. Because if all else fails, he’ll still be mission famous.