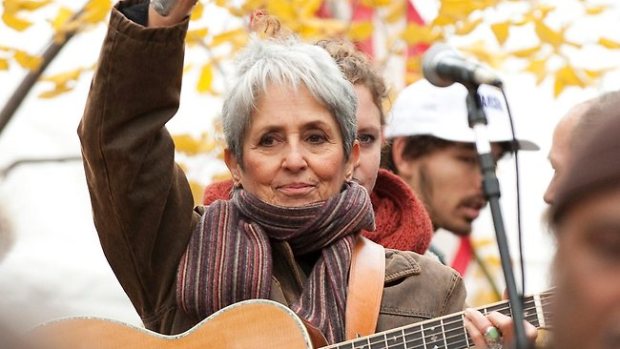 It would be a better world if folk singers synonymous with human rights activism, like Joan Baez, could fade into irrelevance.

If we could leave Baez’s first Sydney concert since 1985 thrilled we’d heard that iconic vibrato, seen that radiant smile, heard her homage to past lover Bob Dylan on ‘Diamonds and Rust’, thralled to her stories of Martin Luther King (“one of my life’s great blessings ”) – but also feeling her protest songs had become museum pieces, plumped by nostalgia yet sapped of meaning.

And it’s true that sitting comfortably in the Concert Hall, clutching the stubs of our pricey tickets, nodding along demurely to that great hymn of egalitarianism, ‘There But For Fortune’ (go you or I) does feel faintly phony.

It’s also true that Baez, who’s been performing for over half a century, delivers songs like ‘Blowin’ In The Wind’, with a charitable air, seemingly more to allay anxieties they may not make the set list than with any hope people may still want to ponder Dylan’s questions.

Then come moments of breathtaking topicality, however, like Woody Guthrie’s ‘Deportees’. “We in the U.S also have a problem with immigration,” says Baez. She explains the song is about 32 Mexican deportees who died in a plane crash, with no known names, and you realise many of her protest songs remain a grim shade of evergreen. Singing it, Baez’s delicate frown and determined, long-sighted gaze looks just as it ever did.

Baez is accompanied by her son Gabe Harris on percussion, Dirk Powell on banjo, piano, violin and bass and, later, by support act Kate Fagan, who harmonises at Baez’s side on ‘Imagine’.

“Social justice,” Baez once said “is the true core of my life, looming larger than music”. Thus, when she arrived in Australia recently, Baez tells us she asked her hosts: “What song should I sing to the Australian people?”

It is, of course, Paul Kelly’s story of Gurindji man Vincent Lingiari, ‘From Little Things Big Things Grow’. And, while Baez struggles with some pronunciations, it doesn’t matter. She chooses the right song to sing to us and it’s a moment when substance trumps style completely, when virtuosity seems like a shallow measure to judge a performer’s might.