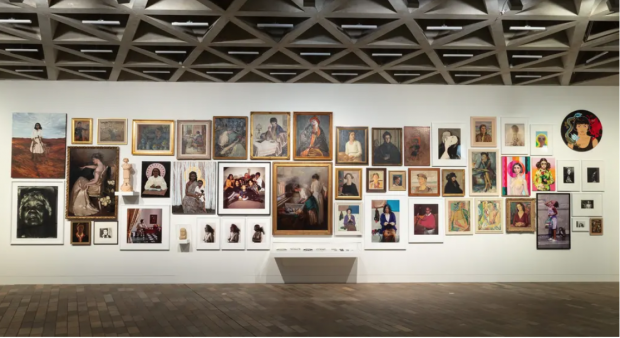 ‘Until recently, this work was in a shed’: NGA surveys 120 years of art in search of gender parity 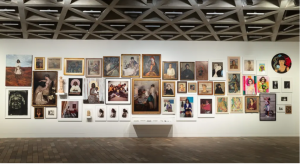 Being asked to serve dinner. That’s a key memory for Adelaide artist Margaret Worth of a landmark 1968 exhibition of Australian abstract art, The Field, at the National Gallery of Victoria (NGV). Worth was an artist of excellence herself, and married to Sydney Ball, whose work showed in The Field.

The curators knew she was a painter when they visited the couple’s home but “just asked her to serve dinner”, says Elspeth Pitt, a curator of Australian art at the National Gallery of Australia (NGA) in Canberra.

Pitt, myself and Deborah Hart, the NGA’s head of Australian art, are standing before the radiating curves of colour of Worth’s 1967 painting Sukhāvati No 5. “She’s so delighted to have this work here now,” Pitt says.

The far reaches of the room we’re in pulsate with an abundance of abstract and colour-field works by Grace Crowley, Clarice Beckett, Gemma Smith and more. Know their names? Or how about this: that in an opposite trend to Europe, modernism and abstraction in Australia was largely pioneered by women? This, despite the NGV stating in 2015 that the male-dominated Field exhibition defined “an entire direction in contemporary Australian art” and “its significance in Australian art history cannot be overemphasised”.

But men’s art can be overemphasised – and has been, as testified by this, the largest exhibition of art by all women artists ever held in the country, Know My Name: Australian Women Artists 1900 to Now. Opening on Saturday and running until July 2021, this big exhibition has small aims. Or at least very overdue ones. “People can easily identify works by male artists like Streeton, Nolan and Boyd, so we want to bring the work of women to people’s consciousness in the same way,” Hart says.

Several key new works were commissioned for acquisition, including an installation by Ngaanyatjarra Pitjantjatjara Yankunytjatjara women, Tjanpi Desert Weavers, called Kungkarangkalpa (Seven Sisters). Woven on Country from grass, and emanating Tjanpi’s signature vitality and wit, the sisters are not quite giants but not human-scaled, either. As one of the first works you see in a room dedicated to First Nations artists, Seven Sisters is an excellent metaphor, too, for the exhibition’s efforts to raise women artists onto the same oversized pedestal as men.

Know My Name’s 350 works occupy the NGA’s expansive upper-level wing. This area was previously home to its Australian art collection which, with the kind of self-awareness and commitment to improve you wish would waft 20 minutes down the road to Parliament House, the NGA admits was “heavily skewed” to male artists (75%). It’s time for that to change, the NGA director, Nick Mitzevich, believes.

Last October, Mitzevich announced a new focus on achieving gender parity “across all facets of the National Gallery” including its acquisitions and governance structure. It acknowledged the work already done by the Countess Report, the Sheila Foundation and social media campaign #5WomenArtists. Because not only has women’s art been here all along but, for decades, so has the labour of those committed to showcasing it.

The NGA sought breakthrough moments in women’s artistic practice. For example Rirratjingu woman Banduk Marika’s prints from the 1980s – the first woman in her family with permission to draw her father’s totems and stories. Or Tracey Moffatt’s Something More photographic series – “the first time Moffatt really established her visual language, drawing on kitsch and filmic tropes”, Pitt says.

Then there is Julie Rrap’s startling Persona and Shadow series of dye destroyed photographs from 1984, taking up a wall. Rrap is performance artist Mike Parr’s sister. She began working with Parr early in his career before branching out and inverting her surname to preserve her artistic identity. “On her first trip to Europe, she was like ‘where are the women?’ so she inserted herself into paintings by Edvard Munch in a fascinating exercise that’s part photo and part performance,” says Pitt.

While the “1900 to Now” exhibition name might suggest a chronological approach, Pitt says “chronologies, really, are a patriarchal construct”. The curators opted for themes of lineage, colour (“we loved that Margaret Preston quote ‘colour is an extravagance of the mind, colour is the emblem of change’,” they say) and the Indigenous concept of “the everywhen” – “that transcendence of linear time and thinking of how the past is connected with the future,” Hart says.

Soon, the NGA will launch a dedicated website to build on the 150 long and short-form essays already in the exhibition’s 450-page book, commissioned out to 115 women writers. Last week a three-day virtual conference featured the American photographer Nan Goldin and several First Nations perspectives such as the dancer and Bundjulung/Ngapuhi woman, Amrita Hepi, and the writer, artist, curator and Worimi woman Genevieve Grieves.

Meanwhile, to increase the number of Wikipedia biographies about Australian women artists (there are precariously few) the NGA is running group editing sessions where experienced editors train rookie Wikipedia volunteers.

“It’s all part of a much bigger picture, but you start with the exhibition, with people seeing, talking and writing about the work,” says Hart. “The first director of this gallery, James Mollison, said, ‘the only way you make iconic works is by showing them’.”

Works that have historically been deemed, and demeaned, as domestic, is another key theme. Stunning batiks from the central Australian communities of Ernabella and Utopia undulate in your slipstream as you pass by. “Batiking is such a strength of Indigenous women’s practice,” says Hart. “We wanted to break down that distinction between arts and crafts – these batiks are every bit as important as any other work here.”

Another textile of note is the exhibition’s earliest work, the Westbury Quilt, made between 1900 and 1903 by the Hanson sisters in the tiny town of Westbury in Tasmania. Prior to being acquired, the quilt hung in a Westbury pub. Meanwhile, doilies by Frances Budden Phoenix have been newly acquired; Phoenix worked in the 1970s to revive and legitimise the art of lacemaking and needlework. “Get your abortion laws off our bodies,” one doily delicately reads, next to a woman in a bustled skirt, raising her fist.

So much has come before, in Australia and also abroad. It was in 1989 that New York art activists Guerrilla Girls released their iconic poster, “Do women have to be naked to get into the Met Museum?” The NGA’s role now is to provide space, scope and, to put it bluntly, money.

“When you look back at other exhibitions, often there wasn’t the money to do a publication like [Know My Name] or to advertise broadly,” Pitt says.

Hart adds: “We’re fortunate to have the opportunity to shape this how we wanted to; to work in these galleries and to show works on this kind of scale.” To pluck from deep within Australia’s biggest art collection, too, as well as to loan extensively from country-wide galleries and private collections. And on occasion, from artists’ estates. Such as Miriam Stannage’s 1970 painting, Aurora, gifted by her family last year.

“It’s so spectacular,” says Pitt. “But until recently, this work was in a shed.”