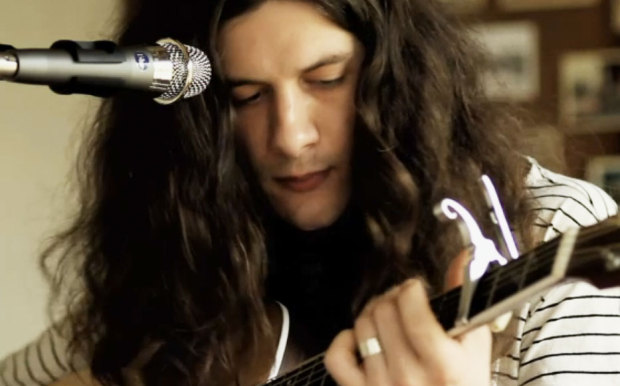 Philadelphia country-folk rock ‘n’ roller Kurt Vile played on Wednesday night with his band The Violators at Paradiso in Town Hall. It was a good show but Vile was made distant by a high stage, fancy lights and, well, all that big venue jazz.

It was a gig reminding you that the acclaim for last year’s record Wakin’ On A Pretty Daze means Kurt Vile and The Violators won’t play at Marrickville warehouse Red Rattler again, as they did in 2011, and that you weren’t there anyway. It reminds you that rock n’ roll’s oldest boast – “I saw them play a tiny bar when no-one knew them” – really burns when it’s not you talking.

Tonight is my chance to right that wrong. Kurt Vile’s solo show was the first Sydney Festival gig to sell out. Held in a small tent, at midnight, fans knew it would be the jewel of Vile’s 2014 visit. They were right.

Just a strip of grass separates the front row from the stage. Proximity grants our adoration the indulgence of scrutiny: we can see Vile’s pale, tour-weary face amid his frizzy mane, hear how his drawl blurs vowels and consonants into a kind of tired meow and feel how, in some moments, the tent holds its breath so as not to disrupt his expressive inwardness.

Banter-wise, Vile declares the bare minimum, such as “Thanks. Charmed.” (on arrival, in cute sneakers and skinny jeans) and “Too tricky” (repeated, to refuse a volley of difficult song requests).

His economy does not seem churlish. All the words we need are right there in songs like ‘Smoke Ring for My Halo’, ‘Blackberry’ and, best of all, ‘Too Hard’, during which rain patters on the canvas roof, its sound an ambient embrace to a song that gives wonderful utterance to the male Peter Pan complex. “Take your time, so they say, and that’s gotta be the best way, but what about the