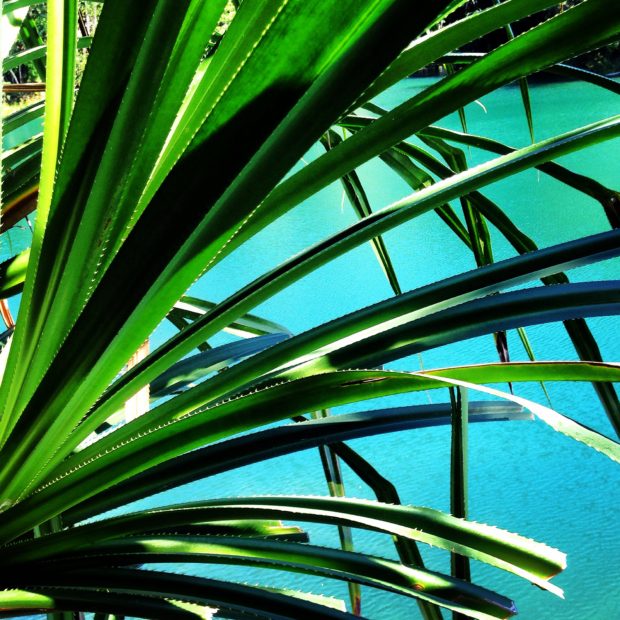 The volcanic soil of Far North Queensland’s Atherton tablelands is home to a growing movement of farms lead by organic, seasonal and local principles.

The rainforest presses in: close, wet and loud. I’m in a cabin in the canopy, on the slopes of the dormant Mt Quincan volcano and the brush turkeys beneath are making a racket. An animal sprints through the scrub; small birds flit between the trees. Night falls fast and there’s a thud on the balcony. Black, beady eyes shine back at me: a possum. An odd-looking possum – big with a dark face and a long, thick tail.

The next day I describe it the owner of Mt Quincan Crater Retreat. “Did it look like this?” Barb says, sliding me a photo. “Yes!” I say. It was a Lumholtz Tree Kangaroo, she tells me, called Mabi by the three clans that make up the Ngadjon-jii Indigenous people of the region. These rainforests are the only place to see this rare tree kangaroo – one of just two species in the world.

The Atherton tablelands in Far North Queensland are one to two hours’ inland from Cairns – depending on where you go. Most visitors stick to the coast, opting for The Great Barrier Reef and the Daintree Rainforest, knowing little of the delights here. Cooler weather, for one. Me, in rainforest awe

The tablelands is still classed as the ‘wet tropics’ but the elevation lowers temperatures by up to 10 degrees – merciful during the hotter months. At 930 metres above sea level, one tablelands town, Ravenshoe, is Queensland’s highest. I hear of frosts and fireplaces.

Traditionally dairy country, the fertile volcanic soil of the tablelands is home to a growing movement of artisanal farms lead by organic, seasonal and local principles. Taking that idea further are enterprises making use of native rainforest fruits such as Lemon Aspen, Lilly Pilly, Finger Lime and the super-powered Davidson’s Plum. The plum has three times the anti-oxidants of blueberries, 100 times the vitamin C of oranges and micro-nutrients including lutein, magnesium, zinc and folate. Mixed with Kakadu Plum, it is used to extend the shelf life of prawns, replacing sulfide preservatives.

The resurgence of rainforest fruits and nuts makes sense. Native orchards are easier to grow and better at weathering cyclones. “They bend in the heavy winds, particularly the plums,” says Geraldine McGuire, founder of Rainforest Bounty. “With the non-natives, the cyclone grabs them and rips them right out of the ground.”

I am sampling Geraldine’s rainforest sauces, vinegars, chutneys and pastes at Malanda Markets. It’s 7.00am and I have an empty stomach but she persuades me to try the spicy plum sauce anyway. Her orchard is free of chemicals, fertilisers and sprays and she mixes all the trees together to minimise pests and maximise wind tolerance. Each year more people move here to begin innovative farms – many, initially, as side-projects to allow them to grow slowly and sustainably.

The markets are held on Saturdays, cycling through four tablelands towns, and sell tropical fruits, vegetables, local coffee and tea, shitake mushrooms, dried mango strips, cheese, chocolate-coated macadamias, vegetables and marshmallows flavoured with rainforest fruits. Shane from Sunnyville Piggery is serving a long line of locals snapping up his free-range bacon and pork. His farm, in the family for generations, “all used to be rainforest,” he says. “We left remnant patches… one benefit is that the birds kill the ticks.” The piggery uses no growth promoters, hormones or antibiotics and feeds its pigs sorghum, oats, rye, turnips and herbs such as chicory for natural worming. “We feed the pigs waste milk from the cows,” Shane tells me.

It is warm, still and sunny. The blissful weather, locals say, is because a cyclone that never arrived “dragged all the weather away”. Still, as midday approaches it grows hot enough for a dip and everyone recommends Lake Eacham. Fed by underwater springs, swimming there is “like an out of body experience,” Geraldine enthuses.

First, I stock up on food. In off-season (November to March or April) the tablelands’ limited restaurant options dwindle to non-existent (except pub food). So French countryside style it is: buying fresh local produce and using kitchenettes to cook by night and parks to picnic in by day.

Yet the roads can be confusing. Each time I leave the quaint town of Yungaburra, I pass a sign to Yungaburra a perturbing distance later. When asked for directions, locals gesture expressively, calling roads “that road” and “the other one”. My phone has no reception, thus no maps.

But those roads curve and swoop, taking in green fields, blueish mountain ranges and pockets of rainforest, making delays are hard to resent. I am reminded of Kenyan coffee country, the sweet-smelling hinterlands of Byron Bay and New South Wales’ picturesque south coast. Then, a squat bungalow will pop out from between the sugarcane crops and I am squarely back in Far North Queensland.

Best of all are the trees, none more so than the towering Bunya pines. A Bunya is around every corner and majestic row of them line the road into Malanda. “Beware falling cones!” reads a sign nailed to a trunk (the watermelon-sized cones can weigh up to 10 kilograms). On the upside, when cones do fall, they are seized. The pine nuts are edible and Bunya pesto is a local delicacy.

Electric green jungle borders the road to Lake Eacham. Drawing closer I glimpse blue between the trees – so blue, I mistake it for a tarpaulin. It is the lake: 60 metres deep and supernaturally bright aqua. The crowds cluster around the edges, so a few strokes and I am alone. Ringed by 1,200 acres of protected highland rainforest, this volcanic crater lake is the best swimming hole I’ve experienced. The Ngadjon-jii think otherwise. “Our people don’t swim in Lake Eacham because that’s where the Rainbow Serpent is rested,” Drew Morta tells me, a Ngadjon man who takes me on a rainbow dreaming walk from Malanda Falls visitor’s centre. Drew has an infectious enthusiasm for his job and an answer to every question. Though when we see a Sooty Owl, glowering from a tree with fierce yellow eyes, he is surprised: it’s the first he’s seen here in seven years.

The Ngadjon-jii moved with the seasons, eating brush turkeys, pythons, tree kangaroos and cassowaries for protein. Turtles, too, which we see flapping in the tea-coloured Johnstone River. “We’d steam those turtles in an underground oven with hot coal and Quincan rock from the volcano. It’s an ash they use for roads now but my people used it for cooking.”

Everywhere we walk, Drew has a story. “See this black bean tree? We floated these pods as little boats as kids.” He shows me the timber used for clapsticks (“it had a higher pitched sound”), the tree used for boomerangs, and the Gympie Stinging Tree. The nettles are intensely painful but, miraculously, the plant used to treat it, called Elephant Ears, grows alongside it. “We used ginger to stop us getting cold and flu, we’d eat the root. Lemon Aspen too – we’d crush the seeds and smell the powerful citrus smell. I still do it today.”

On the way out of Yungaburra, I visit a famous strangler fig called the curtain fig. Its 15-metre drape of tangled roots and Lord of the Rings immensity doesn’t disappoint. Strangler fig seeds were ground up by Indigenous people to make pastry for scones and damper – though this fig is more special then mots. About 300 metres behind it is a ground once used for boys’ initiation ceremonies. I drop by the Oellermann family’s chemical-free sweet persimmon orchard. Tamara Oellermann and I walk between the trees as fluffy ducklings follow a mother duck (whilst also foraging for grasshoppers and microorganism’s and spreading fertilizer). High in fibre and vitamin A, C and B-complex, persimmon is a hugely versatile fruit. Pre-ripe, it is crisp and great in salads, stir-fries or wrapped in prosciutto. Ripe, it is sticky and sweet and great for deserts, glazes or curries.

The Oellermanns moved to the tablelands quite recently. “We wanted to be self-sufficient and for our kids to have a better concept of where food comes from,” Tamara says. The previous owners of used poisons and chemicals. Before they sold they did nothing, focussing on finding new buyers and letting the trees go. The surprising result was a bumper crop – teaching the incoming Oellermanns a valuable lesson. “All the orchard would need was one bag of fertiliser and a cover of netting for fruit flies.”

They won a major battle with weeds sans pesticides, Tamara says, simply by using mulch. The biggest irritant is minor birds intruding to peck the fruit – though damaged persimmons are cut off and fed to the family’s Jersey cow.

In Atherton is a treat for crystal-lovers. Opened by Rene Boissevain in 1983, the Crystal Cave is part-shop, part quirky museum. His daughter Ghis says her father spent his life travelling and collecting crystals, gemstones and fossils. Among the 600 on display – from Chilean lapis lazuli and pyrite cubes from Spain – is the largest Amethyst Geode in the world at 3.6 metres tall. Kids who visit can crack open a rough stone to discover the crystals inside.

I depart the tablelands via the Watson family’s Mungalli Creek Bio-Dynamic Dairy – also a tea-house that comes highly recommended. Surrounded by World Heritage rainforest, the dairy’s placement protects it from drifting pesticide sprays from other farms. It has used biodynamic principles since 1987 and makes cheese, yoghurt and cream as well as milk.

“The Watson family believe it is vital that food be produced as naturally as possible,” reads a brochure in the cafe. “We use bio-dynamic farming principles to work within the laws of nature, rather than perpetually struggling against them.” The trail-blazing family wants other like-minded farmers on board too, and processes bio-dynamic milk for two local farms. On the verandah, eating lunch and looking out at mountain ranges and rolling hills, I meet native fruit orchardist Margo Watkins. The Watkins’ tropical bush food orchard, called Rainforest Heart, is in a valley nearby she describes as “a bit like descending into Jurassic Park”. Margo and her husband have about 1,000 trees, tended with permaculture principles. Aside from Davidson plums, lemon myrtle and finger limes she is experimenting with wild crops of native pepper vine, pepper berry bush, aniseed myrtle and native peanut.

“They are not modified, or bred, which is a big plus for some people,” she says. “And for chefs, they are totally unique flavours.” Regretfully, much of the area’s Indigenous knowledge is lost but Margo knows Davidson’s Plum was once used as a healing rub on wounds and sores. She is focusing on its proven health benefits and producing a deliciously tart, red tea – which is simply the plum sliced and dried. Margo runs tours of her orchard, too, offering food made from the native crops.

These opportunities are at the heart of what Atherton tablelands offers today, summarised best by Geraldine. “Tourism up here is still focused on the reef and the rainforest. But here you get the rainforest food experience; you can get connected to the forest.”

(Boil the Bunya nuts in their shells for about 30 minutes then cut the soft shell to remove the flesh. Dice the nuts for blending.)

Instructions:
Blend the ingredients to a paste; add more oil if needed. Adjust the levels of garlic, salt and lemon juice to taste.