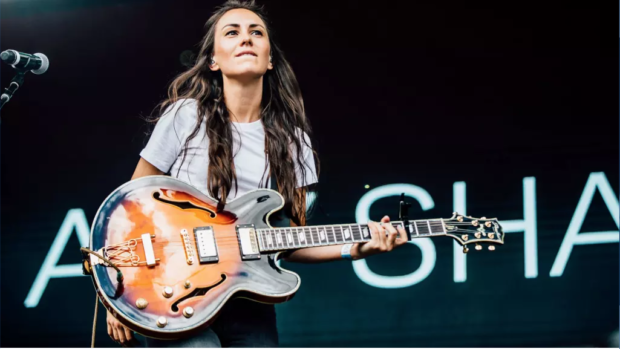 Feminist punk movement, Riot Grrrl, began its “girls to the front” edict at gigs in the early 90s. At Laneway’s Sydney leg yesterday it seems as quaint as a quarter-of-a-century-old demand should.

It’s not about girls; it’s about bad bitches now. Nasty women. Pussy power. About the 1800-Laneway hotline – its signage ubiquitous in its second year of operation – to report unsafe behaviour. About a time when the safety concerns of hip-hop artist and trans woman of colour, Miss Blanks, saw the removal of Kirin J Callinan from the line-up. Down on a hillside stage, Rakel Mjöll, the Icelandic singer of young British band Dream Wife, points at women, singing: “I spy with my little eye, bad bitches.” When the band ignites into punk-rock histrionics, she shrieks, all ferocity: “Bad, bad, bad, bad BITCHES!” The crowd laps it up.

Up on the DIY-themed Red Bull stage, Brisbane-via-Fiji rapper, Jesswar, plays my set of the day. Her beats are simple, sinister and deep and she lays down radical lines with even flow and a sweet smile. A woman sidles up to me, puffed. “Did I miss Savage?” Jesswar plays it next. “Now all you bad bitches, please move to the front.”

The festival is not sold out but the density at the two hillside stages presents as such Like many, I watch bands from afar on a steep, grassy slope. Yes it’s a natural amphitheatre but the stages (no screens) are small for the large space and trees and tents block the sightline.

Not that this largely youthful audience care. A girl commando crawls up a hill, snaking through the feet. “You found us!” congratulate her friends.

The Internet, Anderson.Paak and Odesza are received rapturously, the crowds displaying none of the timidity Sydney crowds often can.

While the bass-driven sound of the electronic acts warps and wobbles over a distance, War On Drugs’ set carries immaculately intact. It’s like the classic rock A.M radio station no-one switched off; the band that’s always been there. Sitting on scratchy grass, back to a tree, I’m unexpectedly charmed.

Alex Cameron’s tongue-in-check lounge rock finds a more fitting context in his impromptu set in the Jamieson’s Bar than on the stage he played earlier. Later, Cameron wanders with Kirin J Callinan – barred from stages but who’s to bar him mingling off them?

Elsewhere, Moses Sumney staggers with his falsetto and ambient crescendos – his musicians seated so you know they’re serious – and Aldous Harding, all in white, quiets a noisy mid-afternoon crowd with her beautifully peculiar folk. Haiku Hands, meanwhile, bring their effervescent “anyone can do this!” pop to a fondly-grinning crowd.

The strobe lights of shoegaze legends Slowdive causes an upsetting disruption to their festival-closing set, however, when a woman suffers a seizure. The song sputters out as people yell and do the “time out” sign. They stop to shine the stage lights on the circles that’s formed around her. When she recovers and is wheel-chaired away, a cheer erupts.