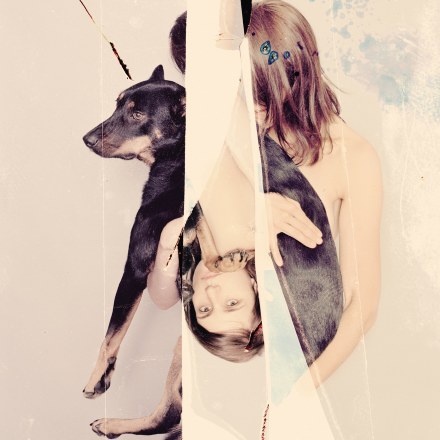 I wonder if Melbourne folk singer Laura Jean Englert ever feels exposed by her honesty. Or did she fly fear’s cocoon long ago? This self-titled record is Englert’s fourth. She released EPs at 21 and 23 years old, and LPs at 24, 26, 29 and now 32. Public peaks of expression as she bore out the private troughs and joys of her twenties, like an accelerated version of the Up Series but with just one starring role.

Like the kids in that series, who are interviewed at seven years old and then at seven-year intervals, Englert’s essence has changed little as she’s aged. She is still writing personal songs that seem wholly honest. She is still singing in a clear and direct voice that rarely yields to raw emotion – imparting, instead, a careful solemnity like she’s prepared to defend every line.

If Englert were good at all this before, she is even better now. A benefit of not yet gaining quite the renown she deserves is that she has grown as a songwriter ensconced mainly in the tight-knit excellence of the Melbourne music community. That sounds flippant, I know – how to pay the bills? – but surely it’s easier to become fearless at baring your soul when it’s not suddenly just strangers staring back? And Englert’s soul has often seemed the most plainly revealed of all. I’m not suggesting this has a corollary of fragility or that she would melt under the spotlight, merely that she has kept making fantastic albums on a fairly even kilter of notoriety over the past decade, which may be no coincidence.

When compared to the vehemence and occasional blunt force of a fool who’ll (2011),Laura Jean is a return to the quieter folk of Our Swan Song (2006) and Edenland (2008). As Englert said on Mess + Noise about a year ago: “I am going to England to record with John Parish. We are going to make an English-folk/modern-songwriting album with nylon-string guitars, autoharp and synthesisers.” Bar the synthesisers, that’s what she did.

There are a couple of playful folk-pop songs on Laura Jean, but its best moments are its saddest. Like Grand Salvo’s Paddy Mann, the devil is in the detail. In attentiveness to things you can see and touch – grass, wind, “dog fur on the floor,” “stones, rocks, bones, an old blade” – and in memories recalled and reframed, votive offerings to fragments from the past that ache with significance – her sister in the door of a café, “a tree on a hill, standing so still.” As Anaïs Nin said: “We write to taste life twice, in the moment and in retrospect.”

Where earlier there was strumming, which by its nature is ambivalent, on Laura Jean individually plucked notes isolate specific moods, often of melancholy. And if her songs were personal before, now they are intensely so.

This was a good album to self-title. Englert refuses the platitudes in easy reach, writing songs so sculpted to each hollow and bulge of her own experience that the role of empathetic voyeur is often the easiest one to take. Bar a song backed by Parish, ‘Prince of Kites’, that is about marriage and thus something more universal (“We are two wind chimes in a gale/Trying to make harmonies”), there are few opportunities to wallow in the lachrymose navel-gazing many modern folk singers offer us through lyrics, like charlatan astrology, that could apply to anyone. Her stories stubbornly resist being subsumed by our own internal worlds, offering inroads entirely on their own terms and only to those who really listen. In a way, this is an opportunity for self-improvement. To listen in full and unreservedly is a good skill to master. To resist the temptation to transfer your own experience onto someone else’s as a means to feel it too, making you blind to the nuance.

‘Sister, All I Have Is My Arms’ is more supplication than song, with Englert’s voice so diminished by humility it seems almost broken. “Let me hold your child/Let me hold you when you cry/’cause all I have are my arms.” Presence during such a moment seems a privilege, though you feel almost like tiptoeing reverently away, not wanting to mar the asceticism of her plea. Once I caught myself suppressing a cough. Which gets to the heart of Englert’s talent: there is nothing comfortingly theatrical about her self-exposure and no fourth wall. And while her voice has always sounded very near, here producer John Parish brings her breath tickling to our ears. We’ve never been closer.

In the wrong mood, Englert’s honesty can make you squirm. As my friend put it: “It’s like when you’re told something you aren’t expecting to hear. You feel compelled to turn away to stop it from feeling so strong.” But that which can be uncomfortable when you don’t identify with it – “We talked with our arms crossed and our legs apart” – dissolves you when you do.

For me, that song is ‘How Will I Know When I’m Home?’. Intimate scrapes between frets precede the scene of listless domesticity that is sketched, where another day is rescued from emptiness by “small tasks and pottering.” For a creative person, fallow time, often fretful, is part of the deal – yet it’s rarely sung of so evocatively.

The song is also about realising your pursuit for greener grass is no longer driving you forward but obscuring your view of happiness here and now. “I still have some passion and some dreams/But for now, music’s just my hobby/I just want us to be happy/Be with my friends and the kelpie.” But is she trying to convince herself? There is a note of something else in her voice – regret? bitterness? resoluteness? hope? – that suggests a lasting peace is not yet forged between the opposing forces of “passion and dreams” and of reclining into the contentment of home. But who knows? On the next record, a little deeper into her thirties, those two ideas may seem less stark and more able to co-exist.

I’m reminded of Paddy Mann a lot. In the beautiful references to nature and animals, in the finger-plucked guitar that works as a kindly second voice and in the episodic nature of several songs. But where Mann demurs by writing himself out of the script, Englert often leaves herself in its midst, even in scenes recalled from childhood. ‘A Mirror On the Earth’ is about her confusion when her parents announced their divorce. “I went outside and sat on my swing/I remember the grass I remember the wind/I looked out over Brisbane Water/And wondered how I could be a better daughter.” Childhood reflections can so easily tumble into the sentimental but Englert’s toes, as ever, quiver along the right side of the rope. We know children often think divorce is their fault. But I only really understood how it must feel for a kid – with my heart and not my head – when I heard this song. And now that I know, I’ll never forget.

This record is not all serious and sad, however. ‘Don’t Marry the One You Love’ is upbeat indie country with lashings of Kimya Dawson’s endearing quirk. A plucky spirit (that would be the banjo) characterises the opening track, ‘June’, the song as invigorating as the brisk stroll to Penders Park it sings of, where you can almost see the clouds of breath in the cold air as the city’s wheels turn. “In Melbourne when the days start to turn cold/They cover up the strip and put up the goals”. Unrelated thoughts come (“My kelpie doesn’t tire as easily”) and go (“My sister and my oldest friend/Were born a year apart on June 4 + 10”) as though simmering to the surface of a meditation, to be noted but not dwelled upon. Unlike the other songs, there is no desire to rewind the tape, just to keep moving at a pace. If the other tracks are evening-time, this one is morning.

And what of the kelpie dog Dusty? He is pictured on the front and back cover and in the liner notes. He is a key character in six out of 10 songs and gets his own instrumental rumination in ‘Kelpie Blues’. The notes say “This album is dedicated to Dusty” but that breeziness masks the dog as a measure of how unassumingly sophisticated Englert’s songwriting has become. Because while these songs are personal, Englert inhabits other perspectives too, with no less potency, her dog providing safe passage between reality and fancy like Enid Blyton’s Magic Faraway Tree.

On ‘Here Comes the Miner’, we wind back to a frontier time where the dog is sent down a shaft to save a miner desperate for riches from his fate. The dog comes back with just some “dirt on his snout,” his efforts mourning the futility of trying to slow our blinkered gallop towards oblivion. Oblivious, obedient and eager to please, the dog is no glorious four horsemen – he’s the “whimper” of the way the world ends, and the song closes with Englert’s hooting sounds seeming to fall into empty space, testing its depth like a well … or a mine shaft.

‘When I First Brought Him Home’ is an epic that could be an interpretation of a traditional folksong but, more impressively, could be creating one instead. Here the dog is a misfit that causes a father’s family to sadden and splinter. He’s taken into the bush, where the dad’s heart breaks as what was once a purposeful working dog is domesticated; taught to fetch a ball. As on Grand Salvo’s ‘The Boy’s Story of His Faithful Family Dog’, the dog represents love in its purest, most innocent form: wordless. They’re all very good songs on Laura Jean but this is the best, probing the dark mysterious heart of fear, as well as fear of senselessness.

For me, this record is a timely salve. It demands attentiveness and, when that is given, rewards it too. Because even when its songs are born of turmoil or explore difficult themes, Laura Jean is so clear and honest in its expression, it creates its own still waters. A restful, meditative place to be, even if just for a little while.