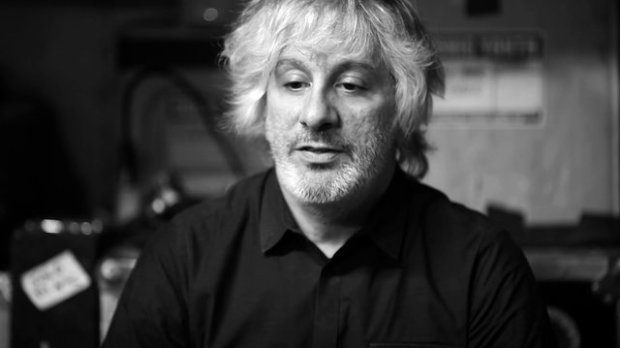 Lee Ranaldo’s ‘Hurricane Transcriptions (The Last Night On Earth)’ can at first only be seen, not heard, rather like a storm viewed from a window, as Sydney’s Ensemble Offspring violinists scrape their bows all-but inaudibly. Gradually, an inhalation begins to pulsate and the volume increases, arching into the aching weep only violin and cello can co-create. A bass drum begins: a reflection of a windstorm’s growing fury …or so I project.

Thus begins my struggle to just let the music wash over me; to not dwell on its fascinating genesis in 2012 when Ranaldo was drawn out into cruel weather to record the “[swirling and repetitive] overlapping drones, tonal clusters and harmonies” of New York as it was hit by Hurricane Sandy. The stormy source material he gathered evolved into Hurricane Transcriptions, performed for just the second time worldwide tonight.

A segue from orchestral to orchestral folk-pop is jarring (Ranaldo splices three conventional Lee Ranaldo and the Dust songs with his Sandy experiment) but worthwhile because during the first of these songs conductor Roland Peelman begins to dance, looking quite like a thing blown by wicked winds himself.

Yes yes, I know the Belgium-born Peelman is conducting, not dancing, but his motions are entertaining enough to make the distinction meaningless. He wears spectacles and is gangly, has hair that is thin on top and fluffy at the sides, and a tall body that dangles, scarecrow-like, from shoulders tensed to keep his arms and hands flapping in conductor code. He jumps and wags his fingers. A few players smile.

It makes sense he can dance, of course. Peelman is trained to draw sound from the dutiful stillness of a performer waiting for direction and has an ear honed to hear single slices of sound amid a cacophony of his own brewing.

The third instrumental passage is the best. It’s then that I stop imagining Ranaldo’s experience of Sandy because I am right inside it. Things bang and blow and reverberate and a cellist rises to hammer a sheet of metal. It is intense but too short – we have no hope of getting lost and found as Lear did.

Musically, aside from its storm-eye crescendo, Hurricane Transcriptions’ crater is shallow. I wonder the obvious things like ‘What did the real hurricane sound like?’ and if Ranaldo’s interpretation could only ever hope to hold a sallow mirror to nature’s might.

Yet several things still make this show wonderful: 1) Peelman 2) Ranaldo’s evident gentleness 3) hearing the voice that sung Sonic Youth’s ‘Wish Fufillment’ and 4) the moment when Ranaldo is summoned back onstage and doesn’t know whether to clap, bow, gesture appreciatively at the players or just grin.

The piece also causes me to recall, for the first time in years, that the most incredible sound I ever heard was also the most elemental: the thud of molten lava landing on a mountainside ledge right before me. I resolve to wander somewhere wild soon, and listen. Perhaps this is all Ranaldo’s work was seeking.