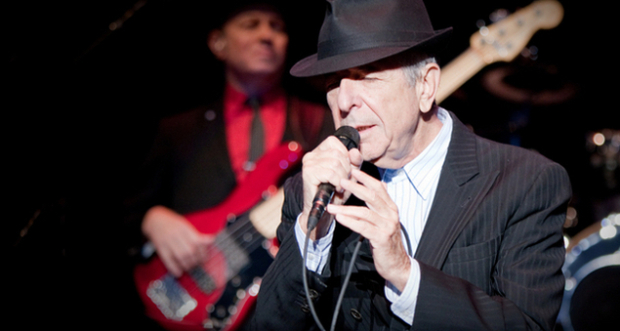 First published in the FasterLouder, November, 2013

“I’ve told the truth, I didn’t come tonight to fool you.”

This line from ‘Hallelujah’ is far from Leonard Cohen’s best. Neither is it the most transcendent moment tonight. It is significant because he adds the word “tonight” and because “you” is us. Cohen is singing about his approach to this show and possibly to his touring renaissance more broadly. He didn’t come to fool us.

When Cohen played in Australia in 2009, I was told the shows were incredible. Age 75, he played for hours, and although his “golden voice” had roughened to gravel many years before it was still mesmerising. My regret at missing out was swift and bitter – what was I thinking? A Leonard Cohen song had been one of just two played after our wedding vows! I didn’t think he would return but, at nearly 80-years-old, he did, and I got my second chance. (I was overseas for his 2010 tour.)

A long, astonishing show I expected, but this show’s greatest delights are found in the things I did not expect, like Cohen’s physical grace and verbal graciousness; his kindness, his humour and his generosity of spirit. I didn’t expect he would give so much of himself, an offering epitomised by a farewell that functioned more like a blessing, bestowed with the calm mandate of a man ordained (which he is, as a Buddhist monk).

Nothing, too, could have prepared me for the first sound of his voice. It stops you and commands you to listen yet it soothes and embraces too. You fall into it and into memories of it.

Cohen jogs on stage – it is his ritual, as is dancing off the stage, camply – and thanks us for coming. He is an old man now and his suit looks a few sizes too big but he still exudes a shadowy New York cool. He gestures to the nose-bleeds and quips about their remoteness. “Thank you for climbing all that way. But please don’t, in your enthusiasm, lean too far forward and jeopardise those beneath you.” Then he thanks us for sacrificing our household budgets to attend. It is the first time I have heard a high-profile performer mention the cost of tickets.

His opening words acknowledge that our longing for him makes us foolish. We’ll squint from seats high up in vulgar stadiums and pay too much money to do it. But it’s OK because Cohen is our comrade in the foolishness. He is profiting but he is on our side. He knows the exchange of music transcends that of money and to prove it, he will give us more than what we’ve paid for – “I promise you that we will give you everything we’ve got tonight” – and thus, together, we will cheat the man and exchange something extra for free.

I may be reading too much into his words. But I’ve done that for all of my adult life. Why stop now when we’re together at last?

The gratitude Cohen shows us is tripled in the gratitude he shows his band, its members sourced from around the world. He introduces them individually, more than once, lingering on biographical details that tickle his fancy. Several times, he crouches at the feet of his 12-string guitarist Javier Mas (from Spain) or his violinist Alexandru Bublitchi (from Moldova) in a pose suggesting worship. If he is fooling them, or fooling us, he is doing it well.

Sometimes he moves to an unlit part of the stage, places his hat on his chest, and just watches his three backing singers: his collaborator of more than 30 years, Sharon Robinson and English sisters Charley and Hattie Webb. They are deserving of his adoring eye. Cohen’s backing singers have always brought the sweetness and spice, light and shade to his dry tones and these three women couldn’t do that job better.

Cohen has roughly three postures, elements of which he blends. There is the broken man – body bent, voice coming from a bowed head, his face masked by hat. There is supplication – crouching low, curled in song. And there is a gospel posture, face uplifted, fists clenched around the microphone cable. He moves between these with remarkable nimbleness – though always slowly with a kind of Tai Chi flow – and mostly he sings with his eyes closed.

It is impossible to think my highlights are the same as anybody else’s. I assume everyone came with a song they longed for and, over three hours, Cohen tries to quench all those thirsts. I can say that the songs from the wonderful 1992 record The Future – ‘Everybody Knows’, ‘The Future’ and the perfection of sadness that is ‘Waiting For The Miracle’ – are played most like their album versions and sound incredible, perhaps also because they were written to befit Cohen’s older, desiccated voice, which in turn suits the jaded propheteering of the record exquisitely. “I’ve seen the future baby, it is murder.”

‘Who By Fire?’ is preceded by a passage of passionate Spanish guitar, its list of ways to die sung on a stage steeped in red. It’s bleak yet very beautiful though it wasn’t a song I thought much of before; I barely even logged its meaning. Having that meaning come to me now, as it is sung by the man who wrote it, is a thrill I won’t forget.

His sparer early material, like ‘Famous Blue Raincoat’, is lonely no more, befriended by full band arrangements, pace altered, which leavens some of the sadness and dark romance. Cohen does go solo for ‘Suzanne’ and ‘Chelsea Hotel #2’, playing guitar in a spotlight (rather plunkily). Mostly, the audience is very sedate but when he sings “We are ugly but we have the music” a woman has a moment which erupts from her in a strangled bellow of “YES!”.

The rest of us keep our moments on leash, stiff upper lips keeping wobbly chins in check. Really, these stadium shows are strange beasts aren’t they? There are no dark corners to wander off and weep in. I wonder how Cohen is received in places like Latin America where emotion doesn’t make people uncomfortable.

Hearing iconic performers play their iconic songs can be difficult to grasp in its immediacy. There is a panic that the long-awaited moment is slipping away even as it happens and a suspicion (impossible to prosecute) that such songs are long divorced from their authors, absconded into our own narratives, with the singer’s role limited to acting out the song on stage. Fooling us.

Perhaps it is because Cohen’s voice is so changed from his early songs, that his most iconic songs evade that fate and hit their target. It is as though he is doing cover versions of himself and reclaiming them as he does. The lyrics were always nuanced and many-layered anyway so when he teases out a different angle, or tweaks a lyric (he sings “I’ll wear an old man’s mask for you” on ‘I’m Your Man’), the song is his again, to sing to us as its rightful owner, just the way it should be. But mostly these songs still have importance because of their poetry. The lyrics are timeless, even those about young love. He is older now but so are we, and those lines have lost none of their relevance for any of us.

So what did Cohen come to do, if not to fool us? The answer is found not in a single moment or utterance but in the inarguable feel of this entire show. Full of a kind of mellow potency, we are all given the permission and space to go to wherever that special song takes us, with Cohen leading by example.