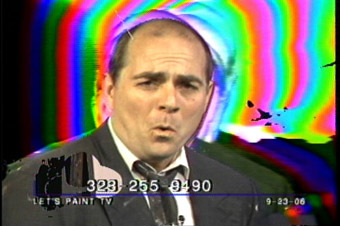 Let’s Paint TV (Electrofringe, This Is Not Art)

First published in The Brag, October 2009

You’ll see a middle-aged man in a suit, jogging on a treadmill. Beside him is an easel and canvass. He introduces himself as John Kilduff, host of Let’s Paint TV. A greenscreen behind him rotates through grainy, miscellaneous backdrops, often featuring close-ups of Kilduff in action.

He introduces the agenda for the show. In addition to jogging and painting, this could be blending drinks, shaving, ironing or playing chess. The central theme? Do it all at once.

“We really can do it all!” Kilduff pep-talks viewers, beginning to pant with exertion as he slathers paint on the canvass.

Kilduff is an artist living and working in Los Angeles. Let’s Paint TV began in 2001 as a public access cable TV show, with Kilduff taking live – and often obscene – calls from viewers. When public studios were shut down last year, the show re-launched as an internet-only phenomenon.

Around 10 minutes after it begins, Kilduff is covered in paint and debris – shaving cream, canteloupe juice, burst balloons – from his activities. But depending on what the goal was, he’s probably achieved it, although in the most haphazard, messy and absurd way possible. Does it matter that none of it is any good? Nope, not when your motto is ‘embrace failure’.

“It’s essentially a how-to show,” says Kilduff. “How to run, how to exercise, how to cook, how to paint and somewhere in that craziness I end up being a motivational speaker. It all turns into how to multitask which kind of mimics our daily life in many respects. We find ourselves doing it all, as much as we sometimes don’t want to.”

Kilduff claims to have only recently accepted his definition as a performance artist. “It’s a challenge. I am not normally an extroverted person but I am open to the human aspect of opening myself up in an artwork.”

Embrace Failure is the name of Kilduff’s “world tour”. He’ll be doing four collaborative shows at the Electrofringe festival alongside experimental noise musicians such as Holly Fluxx, Kati Cubby and Toecutter, as well as Japanese “live action painter”, Iko.

By all accounts, it’s going to get a little crazy.

Musician and video maker Tim Dwyer is organising Kilduff’s Australian dates.  He explains that aural and visual overload is all part of the show, channeling the spirit of Let’s Paint TV itself.

“There will be as many visual elements as possible but since a lot will improvised and spontaneous it’s hard to say exactly what they will be right now,” says Dwyer. “We’re setting up an interactive painter’s gym with canvasses and exercise equipment so John can lead a class and people can join in.”

According to Electrofringe co-director Daniel Green, Kilduff will fit right in.

“The collaborative nature and anarchic sensibility of Let’s Paint TV really appeals to Electrofringe,” says Green. “You don’t have to create a grand master work: action is the most important part. I guess this is where the embrace failure part comes in because you can’t do things very well if you do everything at once. It’s an idealised way of living that goes horribly wrong.”

“I have to be careful about stretching and hopefully not falling but I am pretty much game for anything. More than likely I’ll be doing more of the same: running, painting, blending, talking and losing my mind but somehow making sense of it all and coming back in one piece.”