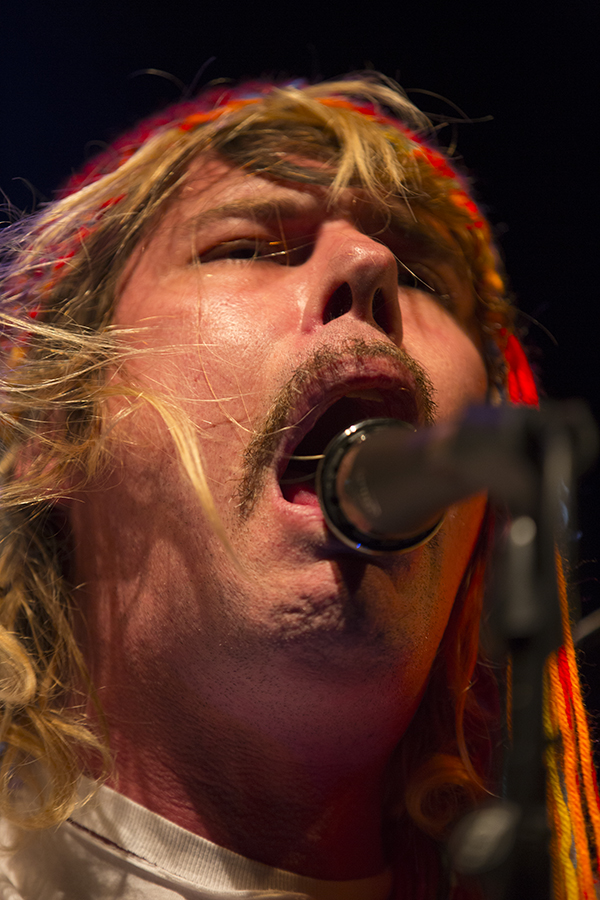 “There’s no earthly way of knowing / Which direction we are going / There’s no knowing where we’re rowing / Or which way the river’s flowing.”

Liars’ pre-show sample is Willy Wonka singing as the Oompah Loompahs row far too fast down the chocolate river. Of course it is! What else? Willy was silly and sinister, in equal measures, just like Liars. Just like the beanie singer Angus Andrew wears as he dances blindly onto the stage, its eyeholes askew, pulled down to his chin where it unravels into a beard of loose threads.

I’m bitter with love for the U.S.-based three-piece. By my reckoning, they supported Yeah Yeah Yeahs in Andrew’s hometown of Sydney in 2003 (the gig where Karen O show-ponied herself right off the stage) and returned in 2012 to play an overpriced rock festival to which, with no sideshow announced, driven by antipodean FOMO, I went. Liars were fucking great, but oh my ire, when they ended their 45-minute slot 15 minutes early. “Angus really loves Sydney – it always means a lot to him to be back here,” says guitarist, synth player and percussionist Aaron Hemphill. Liar.   The show is flawless. There are the bangers to pogo to, like ‘Mask Maker’ and ‘Brats’ and ‘Mess On A Mission’ when we’re so pummelled by Andrew’s unhinged falsetto, most of us forget to dance at all. “Sydney, I’ve got one word for you: yeaaaaaaaahhhhhhhh!” Andrew bellows. It’s the start of ‘Let’s Not Wrestle Mt Heart Attack’ that coiling percussive treat from from 2006 record Drum’s Not Dead and the point of the gig when I realise Hemphill’s high ghostly hoots are key to Liars’ live sound.

The looks exchanged between Hemphill and drummer Julian Gross are laser-beams of intensity; those two focussed on making the music tight so Andrew can let loose and dance the wounded pelican.   When the punk-rock volley of fire that is ‘Plaster Casts Of Everything’ begins, and scenes from the Lynchian terror of its video flash in my head, I realise why I feel so star-struck. Seeing Liars isn’t just about the music. My admiration for all their work comes in a rush: for their websites, their artwork and for years of artfully weird videos, most recently the apocalyptic video-game hunt of ‘Mess On A Mission’. Grafted onto Andrew’s plasticine face I see all his acting work – what else could you call it? – play out in remembered snatches.

The gig is over in an hour. “They left us wanting more,” scrawl the rookie live reviewers into their notepads, accidentally nailing it. I scrawl in mine:  “This is kind of strange Grandpa.” “It’s strange Charlie but it’s fun.”

Buried in my elation after the gig, however, is a sensation I prod like a bruise only to discover it is regret or, more precisely, a sense of opportunity lost. I wanted something to happen. Something radical or hysterical or anarchic or profound – the things Liars’ music promises but the things a gig like this could never fulfill. That was never the deal. It’s time to go home.