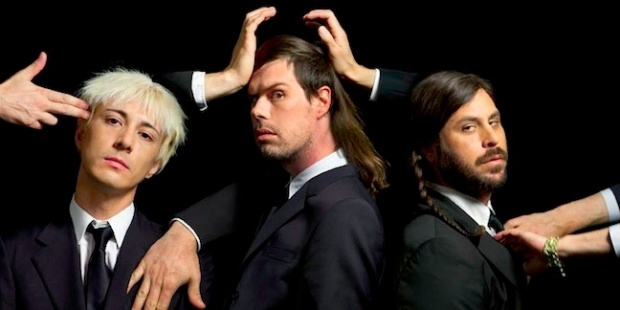 A uranium glow of tragedy pulses from the core of all Liars records. Motifs of bones, burials, bodies and blood; superstition, sacrifice and sorcery are brewed up and served with ritualistic glee, lacing the listening experience with a masochistic thrill. Someone, somewhere has been, or will be, harmed. But due to Liars’ love for symbolism and riddles, it’s not clear who, or why, so the sense of danger is omnipresent. Pronouns like “you”, “it”, “they” and “we” are left indeterminate, floating facedown like phantoms. Reach out and flip one over and “it” could be you.

With the release of each Liars album come the Liars fans, filing back like trauma victims returning to the perpetrator. Over the 10 or so years they’ve been buying Liars records, however, their skin has grown tough. Inured to the murderous body blows of 2010 record Sisterworld, WIXIW is a canny psychological counterstroke that sees the art rock trio abandon their blunt instruments to creep under our skin via more insidious means. Thus, while much has been made of the fact WIXIW is largely electronic, it’s also largely irrelevant. They downed axes and twiddled knobs in the lab instead? So what? Liars don’t experiment with music; they experiment with us. And that goal hasn’t changed on WIXIW.

Granted, there are no big frights on WIXIW like ‘Scissor’ or ‘Scarecrow On A Killer Slant’ from 2010’s trauma-heavy Sisterworld. WIXIW is less weird than 2004’s They Were Wrong So We Drowned, weirder than 2007’s self-titled LP and less conceptual than 2006’s Drum’s Not Dead. It’s probably gentler than the lot. But like these records WIXIW is deeply unnerving mainly because it’s still Liars wearing the white coats. WIXIW may offer some moments of peace to lick our wounds but it’s impossible to forget who inflicted them in the first place.

There’s no greater reminder of crimes past than Angus Andrew’s voice, the sound of which triggers the adrenalin surges experienced during previous albums. His unorthodox range doesn’t span octaves but travels instead between sedated slur and falsetto wail, settling most of the time on a middle ground drawl much like Beck’s.

WIXIW casts its net with the foggy ambience of ‘The Exact Colour of Doubt’. “I wonder where you go?” Andrew muses, plaintively, as layers build, each wearier than the last. Fluttering handclaps, a faint pulse-beat and a languorous bass line droop into the cushioned embrace of breathy, processed vocals. Things move in syrupy slow motion – opiate-soft and dreamy. “I’ll always be your friend/I’ll never let you down/You’ll never be alone.” Any other band and you’d hazard it was a drug-fucked love song, probably post-coital.

Given it’s Liars, your bets are better placed assuming the song is setting up love for an epic fall.

‘Octagon’ is as menacing as it is a masterful, a display of Liars’ ability to use their music to magic-up visual environments. With its squelchy beats, soggy-sounding synthesiser and the cries of seagulls overhead, the song depicts a scene much like the nautical terror of the band’s ‘Scissor’ video clip where Andrew is lost at sea in a boat that keeps filling with rocks. On ‘Octagon’ he sounds disoriented, slurring his words as though he’s trying to break free from barbiturates, as carnival-esque organ chords are struck – warped and nibbled by static – to round out the generally demented atmosphere.

The single ‘No. 1 Against the Rush’ is, predictably, the most “accessible” song on WIWXI. Brightened by lightly plucked guitar, Andrew’s voice seems bereft of irony, hyperbole or effects. He even expresses relatable yearnings like, “I want you, I want you”; a far cry from his demands on 2004’s ‘Brocken Witch’, “I want to be a horse/Men have small thoughts/I need a tail/Give me a tail.” When I say “seems” bereft of irony, I mean it. It’s hard not to suspect he may be bluffing. Herein lies his talent: one moment he’s profound and morose, on the fast track to scoring a shoulder-rub; the next he’s morphed into a mocking, wailing shrew to be approached with high caution.

The robot-dance rhythm of highlight ‘Ring on Every Finger’ jerks us back to reality. Built around variations of a sing-song taunt – “You’re no better than you were/When your heart fell apart and was broken” – the lack of ambiguity to the song’s intent is devastating and ends with Andrew babbling like a talking toy stuck in a loop, repeating the words “still broken”. Clearly this where love plummets to its sticky end. While everyone dances.

A striking feature about Liars is that so much of their music evokes outdoor settings. True, they’ve made some arthouse videos set in forests and at sea that feed into this impression but their songs alone summon some impressively bleak pastorals. On ‘Ill Valley Prodigies’, a gothic scene is sketched out – a graveyard perhaps? – with low foreboding skies. A murder of crows circles and squawks, a warm acoustic guitar makes the air feel even icier, and someone crunches across pebbles. Amid these unusual song ingredients, a woman cries out. Is it ecstasy or pain? It’s not clear. It never is.

A heady swirl of organ sweeps us up in the title track, swelling and narrowing like a great river, before pausing, and cascading off a cliff in a torrent of regret. “Now I see it’s not enough/I wish you were here with me/I can no longer take it all/Wish you would not come back to me.” This time, the broken toy splurts out the words “hollow life” as the organ, once beautiful, powers down like its batteries are dead and hits an ugly minor key of alarm, bent and deformed. On ‘Flood to Flood’ the drama is mapped out with buzzing, mechanical precision as Andrew clambers back up to the safe ground of riddles. “Bring me breakfast after dinner/Tie me up in a red ribbon/Teach me how to be a person.” ‘Brats’ is rave-up time: a big, dumb nightclub thumper you could imagine meatheads dancing to aggressively. It’s out of place but I’m glad it’s there – something that sounds this much like Gorillaz or Basement Jaxx dissolves the tension nicely.

So what’s WIXIW all about? On the press release, Andrew says: “WIXIW (‘Wish you’) is a familiar and universal sentiment of longing and hope, but when misspelt becomes uniquely shrouded and difficult to interpret, which in many ways is representative of our music and the songs we wrote for this album.” It’s a stunningly apt description of these songs. If this is what Liars set out to achieve, they did it, and immense respect must follow for their dedication to the cause.

Who knows what’s next? Liars have the latitude to swerve again, dramatically, along with the artistic gravitas to remain tethered to their own vision. Other acts have a core sound from which they eventually earn a leave pass to deviate – with varying degrees of self-consciousness – to do a “pop album” or an “electronic album”. But where others play fancy dress; Liars shapeshift. And, while their landscapes aren’t of this world, their aesthetic is. “Life is sad,” said Roland S Howard. Yes, it is. It’s also terrifying, murderous and beautiful. All at once.