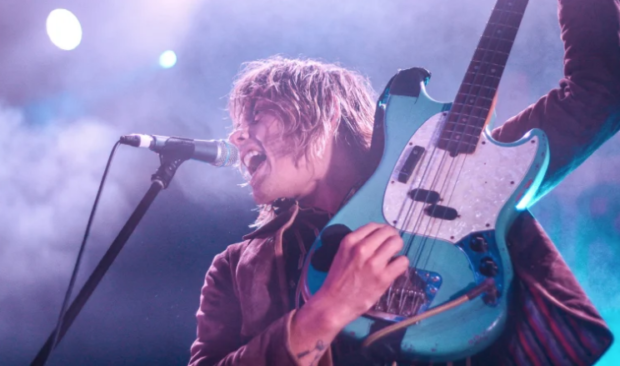 When Oxford Art Factory bills its return to live music as a “speakeasy” in “the most intimate of settings”, without mentioning that the 70-person limit is by decree of the pandemic, you appreciate the flip from buzzkill to buzz.

Lime Cordiale’s second album, 14 Steps To A Better You, is out on Friday. The breezy pop duo from Sydney’s northern beaches has released six singles of hook-heavy earworms, crammed with choruses, owing a fair bit to Kokomo-era Beach Boys.

Brothers Oli and Louis Leimbach and their band should be spilling their sunshiney good vibes over the European summer festival circuit right now. Instead, it’s 14 concerts over seven nights in the early show/late show format favoured by several others including the Lansdowne Hotel.

While the queue isn’t socially distanced and few of the young fans squirt the sanitiser at the door (both quick fixes by the security guard who’s prowling the queue anyway), inside it’s safe cabaret-style seating, with the candles and white paper on the tables giving the room a neighbourhood Italian restaurant air, capped off by Sinatra singing Come Fly With Me.

Given the abundance of blokes booked to play both the Oxford Art Factory and The Lansdowne’s stages in coming weeks, it’s nice to see newcomer Annie Hamilton do 20 minutes of dusky Mazzy Star-soaked songs in a support slot.

From start to close, but especially for Addicted To The Sunshine, it’s all swaying and blissful seat-dancing from a crowd that is far from critical, setting sail with Money, cruising through the singles, and throwing back to favourites from 2017 record, Permanent Vacation.

The band plays with earpieces, which no doubt keeps it tightly timed, and eschews onstage amps to send the sound directly to the desk. It makes for a rich and balanced mix but ultimately detracts from the spontaneity of a less risk-averse set-up. Then again, perhaps we’ve had enough of risk for now.