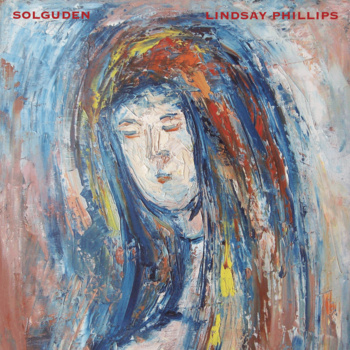 Bushfires are burning in the Blue Mountains west of Sydney. I’m here visiting my family home of 32 years, looking at old photos with my mother, packing boxes to take if we need to evacuate. Outside, blackened leaves scatter on hot, high winds. But more unsettling than the fires or the heat is the sudden impermanence of things that at last touch or sight seemed everlasting: this home, its memorabilia, the Lilly Pilly tree. All this could be gone in an hour.

Our home is in Glenbrook, which is in no immediate danger. Thus, we lack fear’s attendant state of clarity, instead sifting through a material world we love that today, feels an inch too precarious to treasure. Our home is translucent with threat and we are holograms of uncertainty within it. The fires, though – they are real.

It is a fitting mood within which to contemplate singer and songwriter Lindsay Phillips’ newest record Solguden because it muses on impermanence too, in its human form of mortality, its 11 songs turning the concept smooth like a beach pebble. It is comforting music at this time because whether its reflections on mortality are blanched with horror (“The river valley looms – and the undertaker/With those lifeless eyes/Glazed over me”), dark with grief (“We’re given so little time/Broad and high/The wall between us”) or blithe with acceptance (“We’re set free to meet with ruin tonight/We are free to pass on”), they assure us that death will at least be rich with awe.

Most Australians have never heard of Phillips, though he has been writing songs for 25 years. Last year he moved from Melbourne to a remote, woodsy part of Sweden. Unlike his previous two vinyl LPs, Taedium Vitae and Varning, Solguden was self-released in digital form only. In ‘Notes and Reflections pertaining to Solguden’ he explains why: “Here I was now living in Sweden with no income, no savings, and financially wiped out by the move and the previous two releases.”

That Phillips wrote these notes, intended to be read from start to finish, is just one sign of how out of step with the times he is. Musicians these days ration their news, doling out fragments from social media like sugary snacks, bite-sized to arrest childlike attention spans. By contrast, reading Phillips’ notes is a refreshingly adult experience. In his new home of Färna, he indulged in forest ramblings “…tracing wolf and moose tracks in the snow … fathoming the cycles of the sun and moon” and enjoyed “the utter freedom of living with limited human contact”.

His notes yield this final word: “As I write, Spring has taken hold and the world is greener by the day – strange, as where was a white majestic wilderness only weeks before, now all that seemed lifeless has life. What was frozen grows tall, or thaws, and ripples with the breeze. Another cycle begins.”

In 2002, it had been Glenbrook’s turn to burn. We watched the train station go up and much of the bush near our home. About a fortnight later, I went to see the damage, returning with photos of bright green shoots erupting from ravaged trunks. The bush was more alive than I had ever seen it.

On ‘At the Footsteps of Dawn’, Phillips sings “I have come for the ages/And the ages to me/When finally I witness eternity.” His voice is clear and fearless, making it possible to believe he has indeed returned as an emissary from the other side; not bringing news of an abyss but, as he sings on ‘Eternity is Night’: “At the day’s end, we are bone and twine and the glory of our time.” On ‘Talons’ his lyrics reflect a sentiment I often feel in the natural world; something akin to abandonment in knowing that while we may find companionship in nature, it is blankly impervious to us. “Show me the stars which guide you/On the trail as the daylight fades.”

Grand themes, yes, but Phillips seems more marionette to their truth than arrogant puppeteer. And, as the hot winds gust and the radio tells us conditions are conducive to an unprecedented firestorm, we are marionettes too, held by the will of this elemental force.

Where Phillips’ last record, Taedium Vitae, was embellished by a ponderous spaghetti-western feel, Solguden is the purest folk music I have heard in a long time. He plays wonderful, classical-style steel-string guitar and sings in a vibrato-rich baritone that on ‘The Crossing’ is almost painfully soulful, each undulation imparting as much spirit as a gospel choir. On some songs an old Hohner accordion (which belonged to his partner’s grandfather) makes an appearance and on another he plays drinking glasses with a spoon. There is nothing more. The rest of the magic happens in the empty spaces of songs with the contemplative asceticism of the mind of a monk.

Phillips was not interested in recording to computer and understanding “its seemingly limitless options – and certainly I was not striving for perfection.” Yet Solguden’s songs are polished to a kind of perfection, though not due to digital smoothings but indebted to an older quantity: time. Using only simple equipment he owned, Phillips says, “For the first time I was able to approach recording in a more relaxed fashion – No clocks ticking, people waiting, hired gear to be returned.” It is regretful that after all his effort in analogue the album is only available online in digital format, gulped up in its final stages by technology’s ubiquity.

Solguden’s songs have few markers of time or place, with Phillips dwelling not on topicalities but on our oldest concerns – life, death, the sun, the stars. Listening to this album makes me, as a music critic concerned with current trends, feel fatuous and deluded, like I’ve been unpicking the furthest edges of an immense and ancient tapestry instead of trying to glean its centre.

It is a relief to not have to plumb depths of motivation or character – if these songs are biographical, it is well masked. Instead, Phillips sings for all of us, so far from confessional songwriters who bog us down in the vicissitudes of their here and now, expressing pleasures and pains we must indulge as unique. In singing about the old things, the universal things, he encapsulates Leonard Cohen’s words on ‘That’s No Way to Say Goodbye’: “Many loved before us, I know that we are not new/In city and in forest, they’ve smiled like me and you.” His music stands apart – and in my mind, above – any particular scene.

It is interesting, too, the different effects acoustic guitar can have. In most folk songs it soothes, encloses, like a blanket drawn warm around your shoulders. When I hear Phillips’ guitar, I see only a small pool of light around him surrounded by a vast unknowable space, his guitar warding off the dark as long as he keeps playing it. It sounds to me like both loneliness and its solace.

‘At the Footsteps of Dawn’ is the final song, bar a spoken-word piece. Good cheer and generosity spill from its guitar, which maintains a joyous loop throughout, sealing off the dark spaces he has cracked open. Like the other songs, it dwells on death but, more so, it speaks of the companionship of revelation or, really, of enlightenment. It can be enough to see things as they truly are. “I am shown to the world and the world to me.” Though, only one part of this line is true. While Phillips may have seen the world, so few in the world have seen, or heard, him.

Don’t listen to Solguden at your computer with crowded thoughts. Go somewhere where there are just a few potent elements. After the fires, I came back to the city and listened at night on a cliff by the sea. A moon, an ocean and a pine tree; just these three things in my view, the complicated city at my back.