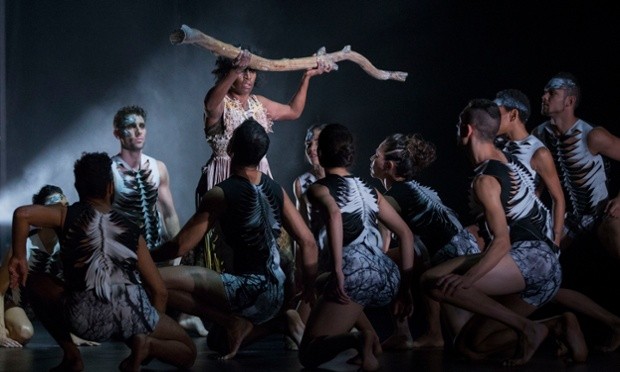 First published in The Guardian, June 2015

Without knowing the works’ development challenges – which are presumably many given Bangarra’s commitment to keeping its connection to country and elders fresh – you can’t help but marvel at the company’s rich source material. What could be more inspiring to an Indigenous dancer or choreographer than the potent symbolism of Dreamtime stories fused with the fluidity of contemporary dance?

Though Bangarra has never been just a dance company. Under the 26-year tenure of artistic director Stephen Page and his brother and head of music David Page, Bangarra has melded dance, music, theatre and art (in its distinctive sets). This aesthetic represents a continuum, as it is a Western perspective to compartmentalise and commodify these artistic expressions. Historically in Aboriginal life, they were – and still are – part of a complex whole.

Bangarra’s theatrical aspect is particularly bold in I.B.I.S. Creators Brown and Blanco are from Murray Island in the Torres Strait – a place they say is “a beautiful, isolated, sunny, wild land of smiles and loud laughter”. All these elements are alive in I.B.I.S which begins and ends in a set representing the island’s local store. There are about a dozen dances – some set to breezy calypso; others to soundscapes washed by ocean waves, piano droplets and the glorious, yet wordless, voice of Sydney singer Elana Stone. There is spoken word, too, exclusively in Kala Lagaw Ya language, for as David Page says in the program: “Discouraging us from speaking our own lingo has scarred us – it is essential that I continue to use language in my music.”

The diversity is wonderful, yet dizzying, with the episodic format playing out rather like musical theatre. The 1950s dresses, stuporous tropical heat and deeply flirtatious dance prompt not entirely welcome flashbacks to that monolith of musicals, South Pacific, if only because of cultural over-exposure to it.

Typical of Bangarra’s style, the dance is low and grounded. Alert men prowl and skulk, hunting turtle eggs. The female dancers, meanwhile, don’t balance on their toes but bounce on their heels, their hands shunning ballet’s splayed grace to remain at rigid right angles to their arms. An exception is a striking duet before a glowing purple fridge, when the bodies of two dancers (Tara Robertson and Luke Currie Richardson) appear fused; their arms undulating in multiple like a Hindu god. It is a shame it’s so short.

Where I.B.I.S is celebratory, Sheoak is tuned to a darker frequency. It has a tip-of-the-iceberg feel, as though what you are viewing is merely the moving parts of something submerged, immovable and very old. Sheoak’s choreographer Rings is female but very good at using dance to express a distinctly male disempowerment. Men writhe in pain as though gripped by disease, nurtured by women, their bodies entwining helplessly. Aggression and its futility is addressed too, with men lurching from one grapple to the next, their opponents within and without. The set makes breathtaking use of diaphanous screens and phosphorescent cloth – the ocean and its creatures feel close.

Through both Sheoak and I.B.I.S, dancer Elma Kris brings gravitas to her role as our usher between liminal states and sets. Her entrances pause the action, imbue the scene with spirit, then take us to the next place.

There is a lot to ingest – visually, aurally and, for those of Aboriginal or Torres Strait Islander descent, spiritually. Relief from the task of parsing comes during I.B.I.S when female dancers sit to whoop, holler and watch the men dancing for them, generating a percussive hullabaloo with drums and their hands on the floor. The women dance for the male gaze next, then they dance together.

Technically, it is fairly loose, with elements of burlesque woven in. But it is my highlight anyway, because it allows us to relax into a less expectant voyeurism than the fourth wall demands. For a while, we simply watch them watching each other and that’s what brings the joy and sensuality. We know their titillation is an act but it feels real. It feels like the dance would be happening anyway, as it always has. As though we are just the latest in a long line of people who’ve come to watch.