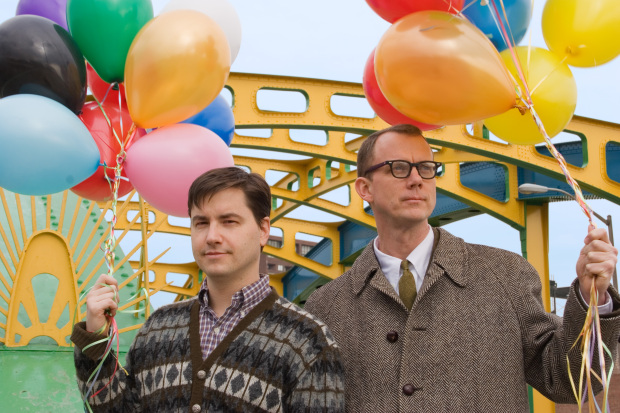 “I saw Matmos in London years ago. They had some sound issue and couldn’t play so the brown-haired guy peeled the other guy’s pants down and spanked him.” My plus one’s story will surprise you if you’d pigeonholed the American electronic duo of Drew Daniel and Martin Schmidt as serious-minded experimental glitch artists who probably didn’t crack a smile during their shows. If you’d assumed Matmos had disappeared up its own avant garde arse many moons ago after you’d read about the concept for last year’s record The Marriage of True Minds without actually listening to it.

You’d be wrong. Matmos’s ninth LP since forming in 1995 may be based on serious-minded experiments in telepathy from the ‘60s but it is very playful and their live show is very funny.

Which is a relief because the crowd drinking ten-buck beers in City Recital Hall’s foyer is mainly guys whose creative facial hair suggests they’d be hipsters if they hadn’t in the 20-year interim become baggy-eyed dads of two. It is the kind of crowd that could puff easily up into annoyingly reverent if Matmos did not continually pin-prick any pomposities with their humility and casual humour.

Matmos’s tour manager, Brisbane-based musician Andrew Tuttle, helps them do an extended version of ‘Very Large Green Triangles’ by reciting stream-of-consciousness spoken word from the transcripts of Matmos’s telepathic subjects. It’s backed by visuals of green triangles descending like alien spaceships onto cities as blanched of colour as a sunbleached postcard or a dream drifting out of recall. Triangles stream parasitically among magnified blood cells (and techno beats, robotic vocals, an airhorn and melodramatic sound flotsam) and at some point, Daniel makes the triangle sign Alt-J make at their shows.

“Usually we play in dive bars and everyone’s shitting onstage,” Schmidt says drily. Later, someone knocks over a glass. “Settle down!” Schmidt yells as its plastic-y diminuendo plays into the room’s yawning silence. “Make it dark Matt. Really dark.”

“We do need to at least see you a little bit.”(Matt)

Into that darkness blooms the shit-encrusted bowels of NYC’s sewerage system, a netherworld where everything is blood, poo, or mucous-stained. The music makes an ominous build but whatever is coming for us never arrives and the sewer turns somehow into a glimmering pile of gold. Don’t ask me how. I wonder if now is a good time for a transgressive stage intruder to show their enthusiasm GG Allin-style until, in a rather heartfelt little speech, Schmidt says the song was their dedication to Coil. Probably not, then.

On the last track Schmidt plays a balloon, releasing air from its rubbery sphincter in squeaks that hiss horribly into kettle-boil shrieks, scraping its bulbous membrane, whacking its tautness like a drum. He plays with the expressiveness and dignity of a lead violinist, or a flautist, or a pianist.

In this moment, I see, hear and enter Matmos’s egalitarian world where, in an auditorium that claims to be “the ideal shape for hearing western classical music”, a big, red, ridiculous balloon, capable of a ghastly array of sounds, takes an honourable seat at the table.