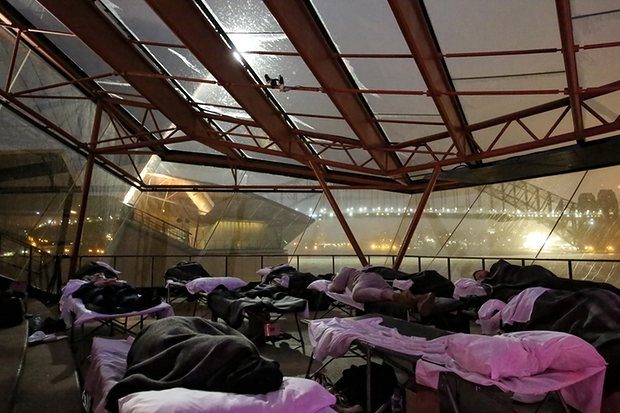 First published in the The Guardian, June 2016

10.15pm would usually be a wrap at the Sydney Opera House, but not tonight. New Order has just finished performing in the Joan Sutherland Theatre and the smell of chicken soup is filling the foyer as a new crowd comes up the stairs.

Some New Order dawdlers linger on, pawing merch or drinking. They eye the newcomers, who are showing wristbands to receive rations of soup, toasties and hot chocolate.

I’m aware our sensible consumption choices and aura of calm may seem slightly cultish. And I suppose it is. Just 200 of us have come to a sleepover at the Sydney Opera House, to see composer Max Richter’s eight-hour composition, Sleep, performed overnight. 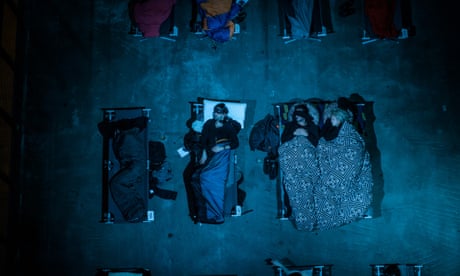 Released last year, the classical work was created with help from neuroscientist David Eagleman with the aim of nurturing the sleeping brain. Richter did not pioneer sleeping music, but the beauty and scale of Sleep, as well as its timing (“a lullaby for a frenetic world”), has taken the genre to new levels of sophistication.

Sleep was publicly premiered at a concert in Berlin last year and the Vivid festival’s music curator, Ben Marshall, bagsed it next. When I attend on Saturday, it is the second of two sold-out concerts simulcast on ABC TV and ABC Classic FM for sleepers at home.

After supper we are ushered to the northern foyer – a prosaic name for the Opera House’s most beautiful wing. By day, the light is blinding here because the walls and ceilings are glass. Jutting out over the water, ribbed by steel, the foyer is a space where the spectres of all of the Opera House design muses are apparent: seashells, a boat, the cavity of a guitar. Or, as I say to a woman as we brush our teeth, “It’s like Charlie and the Great Glass Elevator!” She beams back. We’re pretty excited.

Stretcher beds are arranged in utilitarian rows on three levels – some with a stage view, some without. It’d resemble a barracks were it not for the panoramic water view. Across the harbour, beneath the Harbour Bridge, Luna Park winks at us. Laid on the beds are first-class flight touches: slippers embroidered with Richter’s name, snacks and eye masks.

At 11.30pm Richter introduces himself, the American Contemporary Music Ensemble and soprano Grace Davidson. “There are no rules,” he says, melodiously. Entrusted with our nocturnal duty-of-care, Richter has adopted a warm bedside manner. I think of the bottom rung of Maslow’s hierarchy of needs: food, water, warmth and rest. The next rung covers another key human need: safety. If you don’t feel safe, there is no real rest. An awareness of this fact is present in the timbre of Richter’s voice.

“Feel free to find your own way through this landscape. See you on the other side.”

Richter sits to play the first piano notes – a returning motif that becomes etched into our consciousness. The piece transitions between piano, strings, billowing electronic ambience, deep bass rumbles and voice. And rain. All night, it patters, pounds and thrums.

The fury of wind and water we experience is called “stormageddon” in the next day’s news. Water is everywhere. Thousands of sperm-like droplets wriggle down a glass wall. The glass ceiling is a transfixing blur; the seagulls, smears of impressionistic paint. Water sloughs down an iconic Opera House arc into a spotlight beneath where it splashes back up – a spitting volcano of electric-white magma. People leave their beds to stare at whitecaps forming in the inky harbour below.

I burrow into my bed and lose track of time. People gathered around the musicians begin to slump across multiple steps. The music is quite loud, which is a relief, because it overwhelms most of the people noise. Bar one. At around 2am a woman begins to toss and turn as though her soul has become wedged in the bed’s springs, or entangled in its sheets, and she must wrench it out. Normally I’d be infuriated by her lack of self-awareness but the cellos soar through a deeply sentimental theme and my irritation softens to empathy. I wonder if she’s OK but I can’t ask. The music is between us all – it has our tongues. Richter said there were no rules, but he was wrong. No one speaks. Even eye contact seems invasive.

I half-sleep and rouse to see Richter is gone. His straight back before the piano has become comforting in its ever-presence and, through my fatigue, I feel a pang of worry. Have I missed something important? Where has he gone? Then I realise the string section is playing without him and he’s probably just having a coffee.

For about an hour, I’m caught in a weird despair, troubled by how easily I’ve become dislodged from time and place. I start thinking about solitary confinement as a weapon of war, and a door to darkness opens in my head. A toilet break sorts me out. I pad past Richter, feeling foolish in slippers with his name on them.

More half-sleep. This time, an ugly splattering jolts me awake. There is a leak. It’s no louder than the music but it leaps out – an anarchic sonic intruder. The contrast makes me hear how relentlessly intentional Richter’s composition is; how exquisitely controlled in tempo, volume and mood.

Davidson’s soprano wakes me to a grey dawn. The water beneath curdles and froths and rain still lashes the windows. People rub their eyes and their shoulders and wordlessly gather around Richter and his players for the final piece Dream O (Till Break of Day). It’s an impossibly long crescendo and, again, a deeply sentimental one.

Applause feels silly when it is over. There is a similar bashfulness when Richter and the players bow, leave, return to bow again. Like relics from a past idea of what performance is or can be, that we wheel back out because we don’t know what else to do. Tropes grafted awkwardly to an idea that already feels ancient – even though it has only just expired. You sleep, you wake – and if you are lucky, as we are today, it is an awakening.