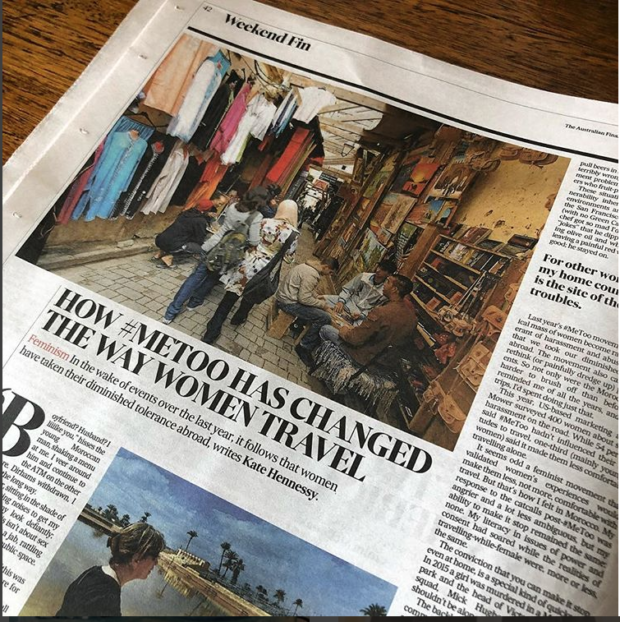 How #MeToo has changed the way women travel

This story was first published on adventure.com

“Boyfriend? Husband? I liiiike you,” hisses the young Moroccan man, shaking a menu at me. I veer around him and continue to the ATM on the other side of the square. Dirhams withdrawn, I return to my hotel the long way.

A second guy, older, sitting in the shade of a doorway, makes kissing noises to get my attention. He returns my look defiantly: there’s no heat, no lust. This isn’t about sex or intimacy. It’s about taking a jab, rattling his target and dominating the public space. It’s about power.

I’d just arrived in Chefchaouen. If this was my first outing, I think, what’s in store for the next two weeks?

Despite my jet lag, my heart had been full when I walked into the sun of this enchanting mountain town of painted-blue buildings. These encounters were a slap across my silly face. Had I conducted more pre-trip research on Morocco’s reputation for street harassment, maybe I’d have arrived with thicker skin and would already be hiking up to the Spanish mosque, getting the sun and exercise I needed after two days of flying.

That’s certainly the opinion of a New Zealand woman in her early 60s who interrupts me when I tell the story that night. “It just sounds like travel to me,” she scoffs. “If you can’t handle it, don’t travel.” Yet here I am, lady. Both travelling and not handling it.

I look online. “I won’t sugarcoat it,” writes Kiki from California. “I heard expletives of all kinds shouted at me, from ‘you’re a whore!’ to ‘suck my dick, Miley Cyrus!’ ” And Kiki was only in Morocco for a holiday. The BBC reports that “many [Moroccan women] simply mould their lives around [harassment], avoiding friction”. It uses an example of one woman, Gitana, who travels everywhere by car to avoid men’s comments and their attempts to touch her.

In February, the Moroccan parliament passed a law criminalising the harassment, aggression, sexual exploitation or ill treatment of women. To be effective, it needs women to report and authorities to act – not easy when more than half the Moroccan men surveyed by UN Women admitted to having sexually harassed a woman or girl.

When I raise it with one Moroccan man I meet, he agrees it must stop. When pressed, he also says “some women like it” and find such “compliments” flattering. Later, he introduces me to the work of late Islamic feminist, author and sociologist, Fatema Mernissi, whom he admires. Morocco, like everywhere, is a contradiction soup.

As I travel around – Chefchaouen, Fez, Midelt, Dades Valley, Sahara Desert, Essaouira,  Marrakesh – I notice the harassment more in cities. In devout Fez, it grates terribly with the city’s boast to be Morocco’s spiritual and intellectual capital. It happens rarely if I’m with a man, regularly with other women, and constantly if I’m alone.

Sick with a stomach bug one day, I haul my floppy, aching body to an appointment at the hammam (bathhouse) that I’d paid for in advance. Pale and sullen, still the comments come (how flattering!) but I’m too weak to care. It gets easier after that; my body’s taught me how to let it slide.

I dress conservatively, though one night I wear bright pink lipstick. Local women wear make-up, so I figure it’s OK. In the medina, a man yells, “Oh yeah, I want to kiss those lips,” accompanied by gross noises. My first reaction? Shame and regret for wearing the lipstick. I was asking for it. Et cetera. Swiftly followed by an even sharper shame for being such a cliché and bad feminist.

I’ve been travelling for two decades! What was wrong with me? Worse had happened that I’d coped with better. Or was “coped” a euphemism for “normalised” it while swallowing a lot of confusion and resentment which was now back to haunt me’?

In Istanbul, it had been “how many camels do you want for her?” In Venice, travelling alone, it had been running the gauntlet of leery locals all day to be cornered by my waiter one night who grabbed my arm, pressed his name and number into my hand, releasing it only when I promised to call. More, and stickier, situations in France, Poland and Croatia.

For other women, my home country of Australia is the site of their troubles. The Hotel Coolgardie documentary tells the story of two Finnish backpackers who came to pull beers in a mining town where things go terribly wrong. A well-documented harassment problem exists for female backpackers who fruit-pick in Australia too.

These situations intersect with the vulnerability inherent in unregulated work environments and financial insecurity. In the San Francisco restaurant I worked at (with no Green Card) in 2002, the Mexican chef got so mad I’d stopped laughing at his “jokes” that he dipped a rag in a vat of boiling olive oil and whipped me on the butt, leaving a painful red welt. I left that night for good; he stayed on.

Last year’s #MeToo movement saw a critical mass of women become rapidly less tolerant of harassment and abuse. It follows that we took our diminished tolerance abroad. The movement also caused us to rethink (or painfully dredge up) past incidents. So not only were the Moroccan men harder to brush off than before, they reminded me of all the years, and all the trips, I’d spent doing just that.

It seems odd a feminist movement that validated women’s experiences would make them less, not more, comfortable with travel. But that’s how I felt in Morocco. My response to the catcalls post-#MeToo was angrier and a lot less ambiguous, but my ability to make it stop remained the same: none. My literacy in issues of power and consent had soared while the realities of travelling-while-female were, more or less, the same.

The conviction that you can make it stop, even at home, is a special kind of quicksand. In 2015, a girl was murdered in a Melbourne park and the head of Victoria’s homicide squad, Mick Hughes, said, “Females shouldn’t be alone in parks.”

The backlash was immediate. Yet similar comments were made this year when another woman, comedian Eurydice Dixon, was murdered. The Victorian Premier, Daniel Andrews, despaired. “Go about your day exactly as you intend, on your terms,” he said. “Because women don’t need to change their behaviour. Men do.”

Yet travel is the hard wall into which such assertions slam – and slide limply to the ground. When you’re off home turf, you don’t get to reframe how safety is perceived. Your priority is to stay safe. To this end, the Australian government’s advisory service, Smart Traveller, offers 2000 words of advice; upwards of 50 tips for female travellers, specifically.

The tips are hard to criticise. It probably is smart to “act as if someone is expecting you” or “wear a wedding ring”. Smarter still to “avoid taking a room on the ground floor”, “make sure the telephone works”, check the “peephole, deadbolt or chain lock” and “use a door wedge”. And while you’re at it, “sit in train compartments with other women”, “check in using only your initial and surname”, “increase your privacy settings on social media” and avoid eye contact with men or sitting in the front seat of a vehicle because “it can be misinterpreted as a sexual advance”.

But such advice puts the exhausting onus on women to avoid being raped, groped, harassed, catcalled or even noticed, instead of on the perpetrators – usually, men. Implicit in each tip is that bad things happen because of something you have, or haven’t, done. Ah, the open road!

Running parallel to this story is another story: the Morocco I adored, wrote about rapturously and would visit again in a flash. My trip came at a pretty momentous time in history to be a woman and a feminist, causing me to reflect in a way that wasn’t always comfortable. Yet it also proved a maxim about travel I hold close: that sometimes it gives you what you need, not what you want.