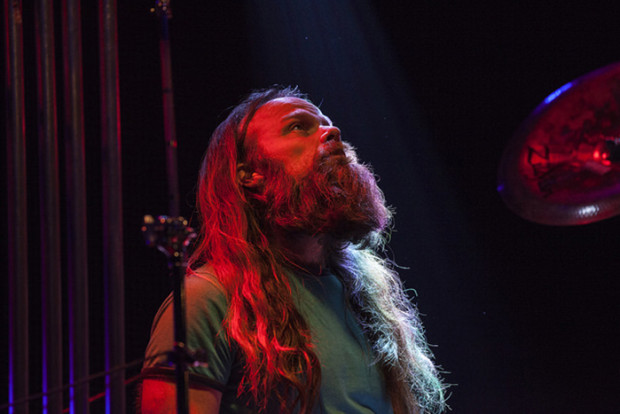 Mishaps and mayhem in Hobart: MOFO 2015

On Saturday Exxopolis is deflated, MONA market is postponed and the Australian Art Orchestra’s collaboration with Arnhem Land’s Young Wagilak Group is blown off MONA lawn and into the museum’s subterranean bar. What happens next?

We wake to find Hobart’s “summer” weather has added icy wind and showers to its un-Australian arsenal. In the line for MONA ferry, Hobartians wear windcheaters while I brawl a belligerent umbrella.

Faced with the prospect of playing what is essentially a walkway between bar and art traversed by waiters carrying cappuccinos and tourists seeking the Great Wall of Vagina, many would call the whole thing off. But the Australian Art Orchestra, today a five-piece jazz ensemble, are improvisers by trade and their two Arnhem Land guests – collaborators in a piece based on the river that floods Ngukurr each wet season – are stoic despite the irony that music about the land is to be played in an ultra urbane space beneath it.

There are upsides. The drone of the singer’s voice may need a microphone but his clap-sticks ricochet off the sheer sandstone walls. And we are close enough to see the two Aboriginal men’s faces remain blank while the white men express the music’s changing moods. These details fill out the imperfections.

Back at the big shed is Canadian electronic composer Tim Hecker. On record he creates soundscapes of static and harmony so exquisite they function as primers for newcomers to the form (‘Spring Heeled Jack Flies Tonight’ from Harmony in Ultraviolet being an excellent place to start). But there is little of that beauty tonight and a whole lot of bass, throbbing and wobbling over the detail, with Hecker’s set hinting, but never arriving, at the gorgeousness he’s capable of.

At the Baha’i Centre is a concert by Michael Kieran Harvey based on the Yoga Sutra. Ticket-holders sit straight-backed in a circle, craning their necks to see not Harvey or his performers – on piano, xylophone and percussion – but Hobart writer Arjun Von Caemmerer doing Yoga poses onstage wearing just small shorts. Much like the asanas, Harvey’s composition displays proficiency and control but little relatable warmth. The organ’s increasingly cosmic moog-like sounds begin to verge on ‘70s prog and when Caemmerer’s feet rise, soles to the ceiling in Sirsasana – or is it Sarvangasana? – the benevolent expressions of many here indicate I may be alone in feeling lost.

“Gira is God,” a friend in his early 40s recently told me. He was sober at the time and isn’t prone to hyperbole. Since reforming in 2011, devotion to frontman and founder of American noise rock band Swans, Michael Gira, has intensified, particularly for men of my friend’s age. Because they are irreplaceable, Swans are a coup for any festival. But Gira’s lyrical themes of light and dark, repulsion and ecstasy, ego and the elemental are especially well suited to MOFO.

Swans’ 75-minute set is just a taste of their customary three-hour gigs. Faced with a “short” set, what do they do? Play just three loud, long songs from a yet-to-be released album, defying our craving for the familiar, closing with a track that thunders into hell and back, repeatedly, articulating unbearable tension and the redemption of release. Cowboy hats off to him, Gira makes masochists of us all, his disregard for back-fire seeing him grow more bullet-proof by the day.

On Sunday, we sit in bleachers on the harbour for a reworked version of composer Alvin Curran’s 1979 piece Maritime Rites (pictured top). Two boats, a pirate ship and two barges are anchored before us bearing drum kits, bagpipes, brass bands and synthesisers, with a tugboat hovering anxiously by. From the moment the first horn sustains on the surrounding hills, Maritime Rites is sidesplitting and magnificent, with breeze-mangled bagpipes, foghorns, delayed Beastie Boys samples and Indian folk singing all miraculously finding a place.

But what’s that sailing in? A roar erupts as a sixth boat glides in with the invading horde of Brian Ritchie, Spanish guitarist Ava Mendoza and Jim Moginie on board, rock-pigging-out for two victory laps. A seventh boat does the same, featuring Hobart band Omahara, their drummer devastating a jungle gym style cage. It’s the first time we’ve had sun without an accompanying shower all weekend and it’s glorious. Long live high-risk outdoor events!

The weekend’s world music acts are a raging success too, particularly the traditional Indian music of Debashish Bhattacharya. His trio features the vocals of “teenager” Sukanya Bhattacharya and collaborator of 35 years, Tanmoy Bose, whose hands fly over the gulp and swallow of tablas. All three are equal in skill, charisma and humility: Sukanya’s vocals transcendent and Debashish’s Indian slide guitar contrasting drone and astringency, his face alight with love.
Baltimore’s Dan Deacon outsources his show to the crowd. After a taste of his frantic electronica, terror leaps into the hearts of introverts as Deacon establishes the rules. Let go of your anxiety and self-loathing. No cowards. You must dance. If you don’t, people will point and laugh. Predictable mayhem ensues when America’s pied piper of dance commands we run outside and make an archway of arms. Let loose from all the serious and seriously amazing work MOFO has delivered, Deacon’s self-help silliness is a fitting farewell. On rolls the crowd to the after-party, Faux Mo.