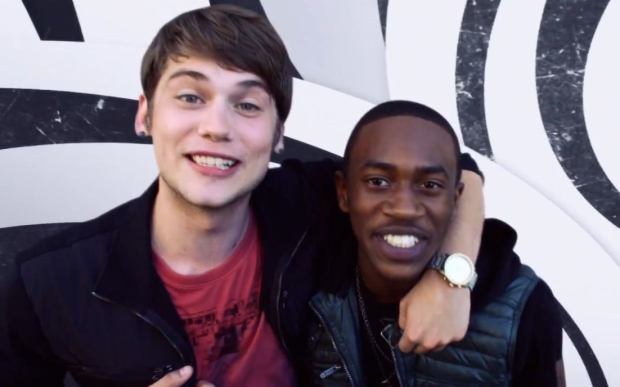 Malcolm Kelley and Tony Oller claim MKTO is not just an acronym of their initials. Their high-energy R&B may dwell in mainstream music’s dead centre yet MKTO also stands for Misfit Kids and Total Outcasts.

Kelley and Oller are young LA actors who met on a Nickelodeon TV show. The actor thing would explain why the misfit thing seems to be a role, not a reality, but these talented and fresh-faced guys are poorly cast as the outcast character. Insouciant Bieber-esque party boys however? They have it nailed.

Or maybe it’s more complicated. The face of my tween nephew rumples in sincerity as he explains: “No, they’re not misfits but they represent all the kids who are and make them feel better.”

Whether MKTO are real misfits, scripted misfits or misfit ambassadors they are immensely popular in Australia. Their first single Thank You reached number two here (it didn’t rank in the U.S.) and their debut LP reached number one, released here in January of this year, two months before the U.S.

Bar tonight’s slower numbers – which include acoustic covers of Lorde’s Royals and Pharrell Williams’s Happy – MKTO preside over a show that is more comfortably polished pop rock than R&B or hip-hop due largely to a hard-hitting drummer placed on a centre-stage riser who owns the evening’s showiest sequences.

Things proceed in a high-energy blur excited by a multi-coloured laser show – every song met by shrill teenage screams that amplify when Kelley and Oller do, well, anything at all.

Though aside from bounding around like puppies in ocean froth and more than adequately singing their parts, Kelley and Oller don’t need to do much anyway. The rock ‘n’ roll flavour excuses them from boy band dancing and, really, all the heavy lifting was done when the perfect pop of follow up singles Classic and God Only Knows were penned. Delivery is all that remains to square off the happy formula and MKTO do that with gusto.

Yet if Australia is indeed MKTO’s heartland, it would be nice to get to know them better, a desire thwarted by Oller’s stream of saccharine clichés. We are told to hold up our “cell phones” because “I wanna light this place up”, that “this is the best city of our whole tour” and “thankyou for letting us live our American dream”.

Thus, my best moment is not when the duo play Thank You for the encore, even though the chorus