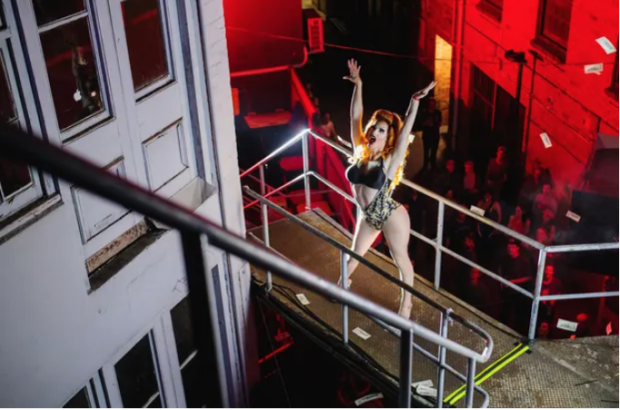 You’ve got two kinds of Australian festivals, roughly speaking: camping festivals that take place among nature, and those that infiltrate a city or town. Gigs in the bush just make me anxious for the animals. I prefer the town takeovers.

One of the best things about the two festivals run by Tasmania’s Mona – Dark Mofo (winter, Hobart) and Mona Foma (summer, Launceston) – is that its curators are very good at sourcing lesser-known venues as fresh meat for shows. There have been some extraordinary coups, such as the active freemasons lodge at last year’s Welcome Stranger parties in Hobart. This is Mona Foma’s first fully-fledged year in Launceston, or “Launie” – which, as a destination, is itself fresh meat, particularly for mainlanders. We don’t need a festival to delight in a ladies-wear store called “Damsels In Dis Dress” or to marvel at Nirvana’s Nevermind CD propped in a record store window like it’s 1992 again.

In Launceston Workers Club is Heath Franco’s deranged video art and a leathery bloke pulling beers who tells us: “There’s some art upstairs too if you’re keen.” There we find Rosie Deacon’s explosion of glitter and colour, where extroverts can don sparkly clothes and strut down a catwalk. There’s nothing workmanlike about it.

Launie’s natural assets are exploited too. At the glorious Cataract Gorge I swim in silky water and behold Amanda Parer’s immense inflatable sculpture, Man. Some idiots had apparently swum out mid-week and fooled with it, causing it to deflate, but thus has it ever been with public art. At Fairy Dell in the gorge, Mindy Meng Wang plucks an ancient Chinese guzheng at a morning meditation where even the children play quietly.

The legendary Faux Mo afterparties are at Lonnie’s Nightclub, one of those sprawling, seedy dens that’s never changed – and never should. Faux Mo features a heady blend of nude live drawing, drag shows performed to the sitting ducks that waited in line, roller-skating to the frenzied sax and drums of Party Dozen, and Neneh Cherry (who headlined on Saturday night) spinning her fave dub tracks.

There’s the sludgy hardcore of Canine – from Sydney’s Black Wire scene, RIP – the searing atmospheric post-punk of Hex Debt and the entire room in a swoon for South African singer, Nakhane, who covers INXS’s Never Tear Us Apart and Kylie Minogue’s Slow.

At a Cine Mofo Q&A the next day, Nakhane credits Slow’s video for confirming his inkling he was “gay as fuck”, because his gaze kept straying to the speedos instead of the bikinis.

The headline buzz, meanwhile, is at the main festival site of Inveresk Precinct, where the University of Tasmania is building a new campus. There, designer Adele Varcoe’s onesie workshop is back for the second year. On Sunday the onesies are handed out, with adults, kids and Brian Ritchie all in the smurf-blue suit by day’s end, lending the fest an escaped inmate feel, juvies and all. Others wear pink onesies – Varcoe’s fabric from 2018 that is now, apparently, an “I was there” status symbol.The big stage is hit with a hat-trick of issues: sound, intimacy and lack-of-shade. While acts with banging bits work well (such as Pnau, billed as “Not Underworld” on the program), Julia Holter’s intricately assembled songs sound scattered to the winds.

The concentrated aesthetic of performers such as Jonathan Bree – with costumes, masks, dancers and visuals – is diluted by an environment at the main stage that feels a little too much, somehow, like every other festival stage you’ve ever melted in front of. The Sunday heat, meanwhile, forces most people to pool in the tree-shade up the back for Hobart’s Ewah and the Vision of Paradise.

The smaller stage more than makes up for it. It helps that there’s more shade around it – and the Launie Longneck Lounge, for a viewing perch with a coldie – but even front-and-centre in the scorching sun, the second stage is highlight heavy. Niger trio Les Filles de Illighadad, Group A, Southeast Desert Metal, Striborg and the Australian Art Orchestra and WWWater play my favourite sets of the festival here.

Bar one, that is, back on the main stage. No Courtney Barnett gig has raised as much gooseflesh on my arms as this one. She’s totally in the zone, losing herself to the tempests of her guitar (a different axe for most songs, in fact), her voice occasionally breaking out from her patented talk-sing to a brief, aggressive bark on heavier songs such as Faceless Nameless and I’m Not Your Mother, I’m Not Your Bitch.

Which leads me to the most apparent fact of Mona Foma: the number of female acts. From main stage guitar heroes like Barnett and Ewah’s Emma Waters to Hex Debt, Canine and Les Filles de Illighadad. There is the beautifully punishing electro of Japanese duo Group A, a dance piece of unparalleled intensity from Canadian choreographer, Dana Gingras, and DJ after DJ after DJ at the Faux Mo parties.

When Barnett plays Depreston – my 10-year-old niece’s favourite song – two girl-tweens pop up the front to film it. Watching them, watching her, I feel so hopeful and happy in the certainty that “the future is female” isn’t just a T-shirt slogan.