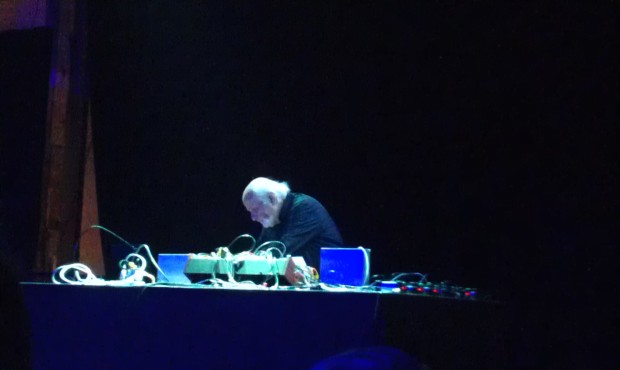 It’s impossible to predict if octogenarian Morton Subotnick playing his 1967 album Silver Apples Of The Moon (the first electronic work commissioned by a record label) will impress as an artefact or purely on its own merits. Will the snowy-haired Subotnick’s playing of a Bulcha synthesiser only thrill the analogue gear-heads? Would the piece sound as good were it played by a po-faced guy in a hoodie squinting down at a MacBook? Played in crystalline surround sound to a pin-drop quiet crowd, Subotnick’s piece is a revelation. Antiquated-sounding, yes, in all the bleepy ways you might imagine, but in the ample space between the hisses, squelches and harmonic washes is a presence that died out as our grip on technology grew more alive: a sense that the man/machine scales are evenly weighed and that despite the electronic composer’s darnedest efforts, machines were still erupting with their own untamed utterances.

For Subotnick, the audience is on its best behaviour and this is a well-behaved crowd at the worst of times. People stand at respectful distances to each other, heads arched, listening intently. The last part of Silver Apples is the best: melodic droplets bubbling down all around us. After the show, a shared elation is felt and strangers meet strangers and talk about Subotnick.