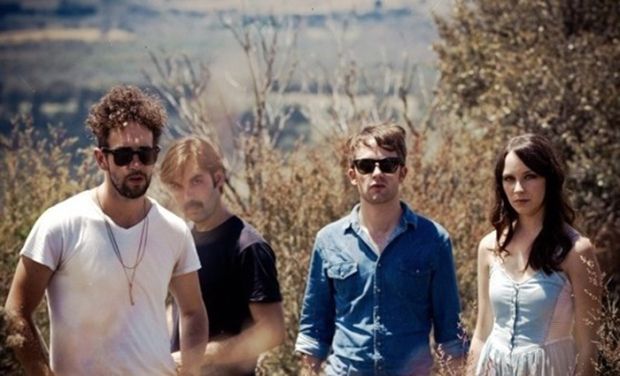 To tourists, The Blue Mountains region is a must-do day  trip from Sydney. Fifty kilometres from the capital, it offers spectacular vistas draped in blue mist and a fair chance of seeing an echidna. Conveniently, this area can also sate urbane yearnings to browse antique shops and recline in cafes.

To residents, ‘the Blueys’ is a place of contradictions. While the air is bright and fresh, a persistent thread of dysfunction darkens it, evidenced by higher than state average rates of psychological distress, self-harm and domestic violence. But, in this place of shadow and light, one thing is true: it’s a great place to create music. The region is spacious enough to make noise without aggrieving the neighbours, the pace is slow so inspiration can flow, and it’s close enough to Sydney to gig there.

In the 1990s, metal, funk and jazz were the big scenes. Standard small-town sounds played in pubs, town halls and youth centres to crowds that ranged from uninterested to utterly feral. In recent years, however, a string of popular bands has emerged from the mist. There have been Belles Will Ring and Hermitude, as well as Cloud Control, who won the 2010 Australian Music Prize for their debut album, Bliss Release. Members of the Holy Soul and the Paper Scissors are from the Blue Mountains, as is hip-hop artist Urthboy. Then there are exiles from Sydney’s gruelling rental market, like Jack Ladder and guitarist Kirin J Callinan (Mercy Arms, Lost Animal), as well as members of Richard in Your Mind and the Lovetones.

Aidan Roberts from Belles Will Ring recalls their manager convincing them to mention their Blue Mountains roots when releasing their first album, Mood Patterns (2007). “He said it would add to the ‘mystique’. We said, ‘Why would we do that? Let’s just say we’re from Sydney’. But, sure enough, it became a huge talking point.”

Since then, a growing bevy of bands are stamping their Blue Mountains origins on their bios. As a publicity angle, it works. Music writers rarely fail to omit it and radio presenters dwell fondly on the fact. “People like to imagine there’s a romance to it, and then it kind of becomes true. It’s been put on the map,” Roberts says.

Richard Cartwright of Richard in Your Mind moved to Hazelbrook last year with his partner after they were evicted from their cheap Sydney rental of 10 years. A comparably sized place in the city would have cost nearly double their previous rent, but in the mountains they discovered they could pay off a mortgage.

Cartwright still commutes to his part-time job of 11 years at a St Vincent de Paul op shop in Sydney. “I’d decided to be a musician and you need to dedicate time to that,” he says. “But part-time work doesn’t pay Sydney rent. Moving up here was a way to not work more. Work will drive you crazy!”

He continues: “I am still a city guy, but I’ve started to slow down. There’s more blank space to think about words. And it’s beautiful. It’s the land of gardens, sunshine, birds and mornings. I can walk the dog to clear my brain or sit on the front porch in a rocking chair with a banjo. Oh, and a possum broke in through the doggy door last week and climbed up the bookshelf. I had to tear him off!”

After four years living in Sydney, Roberts returned to the mountains a year ago. While he says he’s “happy to be home,” he admits his hometown has “so many faces.” “There’s a bleak indigenous history when the colony spread from Sydney outwards,” he observes. “Then you get tourists getting lost in the Megalong Valley and dying overnight – people don’t understand it’s an unforgiving landscape. It’s a great place to raise kids, but there are also places like Kingsford Smith Park in Katoomba, which is a really eerie gathering place for junkies. There are all these grimy corners. I like it. It’s part of the character of the place.”

Since quitting full-time work, Roberts survives from music alone (he’s also in Lanie Lane’s band) and says the cheaper food, transport and rent makes that possible. “There’s not a constant stream of social things on every night,” he adds. “My mind is clearer up here; I have quiet time to work on stuff.”

Roberts’ alt-country project the Maple Trail released its debut album Cable Mount Warning in March. This and Belles’ 2011 release, Crystal Theatre, were both recorded in the mountains. “We want to make music with atmosphere and space in it,” he says.

Space. In independent interviews, all Blue Mountains bands mention it. Cloud Control bassist Jeremy Kelshaw says, “The way we write is often a cauldron of ideas boiled down in an attempt to find simplicity, and the mountains is part of that cauldron. We like space in our music. Less is often more.”

Could it be that an appreciation of space is what defines Blue Mountains bands?

“For us, definitely,” says Roberts. “Belles recorded Crystal Theatre in a fantastic home out beyond Lithgow, and the atmosphere of being in the country in winter informed how we played. It gave the record an extra quality it wouldn’t have had otherwise. The Maple Trail recordings are mostly made at home, and I use ambient sounds from the house and from night-time outside. To me, my music sounds like the Blue Mountains and that’s kinda cool.”