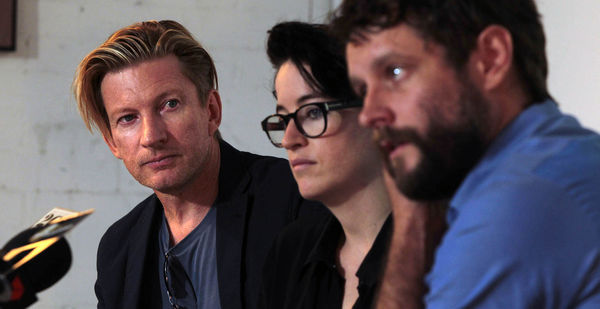 “In the arts community,” said Archibald Prize-winning painter Ben Quilty, “the idea of mercy and compassion goes without question. To be a good artist you need to understand people and their mistakes.” David Wenham, Megan Washington and Ben Quilty at the Music For Mercy press conference in Marrickville

Quilty was close to tears but so focused on his message his distress stayed at bay. He was speaking to a scattering of journalists and a TV crew on Wednesday who had come, at short notice, to the Marrickville studio of artist Guy Maestri to hear about the following evening’s Music For Mercy vigil. We sat on rickety vintage chairs. On a coffee table lay a budgie, one of Maestri’s models, bright in death. This was an artists’ summoning all right.

Quilty sat sandwiched between his friend and musician Megan Washington and journalist Brigid Delaney, co-founder of the Mercy Campaign, a group formed in 2011 to ask clemency for two Australian men on death row in Indonesia for heroin trafficking, Andrew Chan and Myuran Sukumaran. Actor David Wenham, appointed MC for the following night’s vigil, and musician Jenny Morris, who was helping to organise it, were there too.

Their five grim faces made it clear they all felt deeply about the plight of Chan, Sukumaran and their families with rumours the pair may be executed by firing squad within weeks. “I want to show them ‘Look how many people care for you boys’,” said Quilty in the quote picked up broadly by media sources that day. “You are not alone on this horrible, bleak path.”

As the conference rolled on, text messages flooded Washington’s phone from musicians accepting her invitation to play at the vigil. “Music cuts through all communities and using it to connect and unite people just, I don’t know, works,” Washington told me after. Quilty’s stories to her of his time teaching painting to Sukumaran in Bali’s Kerobokan prison, she said, gave her a “human access point” into a situation she’d found too complex to approach. “Inside the complexity, though, is a simple truth – these two young men have been rehabilitated by the Indonesian system and they don’t deserve to die.”

But both sides of the death penalty want to own the simple argument. Which is why it’s fortunate that no one at Thursday’s gathering argues at all. As more than 1000 people gather before a stage in Martin Place, in downtown Sydney, some bearing placards and branded T-shirts, it is difficult to shake the feeling I’m at some kind of rally, even though Delaney did her best to dispel that notion the previous day. “It’s about Andrew and Myurun and nothing wider. You could still be undecided about the death penalty and come along”. And Wenham’s first address assures us this is neither a political or religious event.

Ultimately it’s the words of neither spokesperson that dispel my suspicion someone may be about to slide me a flyer. Rather, it is the gentle flow of the evening itself, the humility of those involved, and the merciful dearth of shrillness or rhetoric. Amid the crowd are screens showing snaps of Chan and Sukumaran as boys, beaming. Sukumaran’s portraits of the two as adults appear on the screens too, their faces fraught by thick, expressive strokes that reflect the intense one-on-one training he has received from Quilty.

Washington is first to sing – she does ‘One For Sorrow’. Each musician performs just one stripped-back song after uttering the evening’s mission statement: “I stand for mercy.” As it darkens and candles are lit we feel the undeniable pathos of a vigil held before, not after, death.

We hear Steve Kilbey sing of providence and Justine Clarke of “something that makes you smile”. Glenn Richards of Augie March does a beautifully controlled version of ‘There’s No Such Place’ and the trio of Rob Hirst (Midnight Oil), Amanda Brown (The Go-Betweens) and Bruce Reid (Dragon) quietly devastate with Lucinda Williams’ cover ‘Born To Be Loved’. Later, Kate Miller-Heidke silences the already hushed crowd with her song ‘Bliss’.

The dark repurposing of The Presets’ hit, ‘Ghosts’, sung with just a keyboard and a lot of heart by its author Julian Hamilton, hits its target almost too cleanly to bear. “Once I was a very young man, and very young men are none too clever”. Later, Hamilton tells me “When Megan called and asked me to sing, I thought ‘that’s the one’. That song is autobiographical, it’s about young men doing stupid things and moving on to an unwritten future and not having that necessarily define who they are.”

We hear from the founder of Family Drug Support, Tony Trimingham, whose son Damien died of a heroin overdose nearly two decades ago. “My son made a stupid decision too but he was a risk taker who thought he was invincible. These men were similar, invincible young men risk-taking, thinking they’d get away with it.” Trimingham says he’s talked to other families in his network and has come tonight with a message. “Contrary to what people say, families affected by drugs do not want to see these boys punished – they do not,” he says.

There are other speakers too. Quilty, again, and the two men’s lawyer of eight years, Julian MacMahon, as well as letters penned by Sukumaran and Chan, read by Wenham, which should not suffer paraphrasing. It is Trimingham’s comments, however, that express so well this evening’s nuances. That in a stark and grief-stricken situation, Trimingham and those he represents are not bound to causalities between drug-trafficker and drug-taker. Instead of seeing the differences they see the similarities between their children and the sons of the Chan and Sukumaran families: choices gone wrong.

Backed by Paul Mac, Abby Dobson closes the evening with a Leonardo’s’ Bride song, ‘Even When I’m Sleeping.’ “I love you, Even when I’m sleeping/ When I close my eyes, You’re everywhere.” A choice you can only assume is again for the families, here tonight, so painful you barely know where to look.

The crowd hold their candles high for a photograph as the many musicians now gathered side-of-stage hear, and presumably cherish Quilty’s words. “A musician’s voice travels over the oceans and through the walls of Kerobokan Prison.”

Andrew Chan and Myuran Sukumaran barristers are travelling to Bali today. They are bringing photos and videos of the evening’s vigil to show the two men.