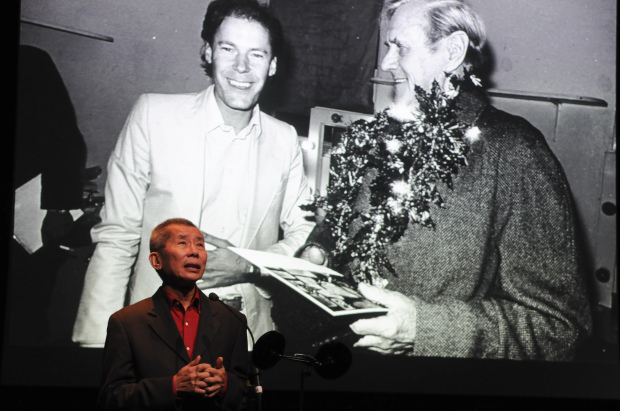 A curious thing happens when you “make it” in the arts. It seems to outsiders as if it’s always been thus: a mysterious line is crossed. It’s hard to imagine established names like designer Jenny Kee, actress Robyn Nevin, and artist Brett Whiteley as young creatives feeling their way forward.

With his work My Generation photographer and performer William Yang takes us back over that line, when these artists and others in their scene were still experiencing both the discovery and doubt of their potential.  Using his photographs as documentary reportage, aided by live guitar and Yang’s idiosyncratic monologue style story-telling, we’re invited back to bohemian Sydney in the 1970s when gay liberation was blossoming, the parties were wild, and the artistic underground thrived.

Yang glides from the darkness to stand in front of a simple podium as two large screens bloom into life behind him, into another era, showing the first of the evening’s photographs. He begins the story.

The format is sparse: the screens scroll through photographs – mostly portraits and party shots – as Yang tells us what he recalls of the scene and of the personalities in much the same intimate way someone might talk if you were flipping through a photo album in their home.

Yang’s insight is steady and his observations – photographic and verbal – reveal a mesmerising duality. The tales are wild but the undercurrents are gentle. The times are happy but laced with grief and addiction. My Generation‘s insider peek into this world reveals what, really, we already knew. Artists, so bold, so fragile.