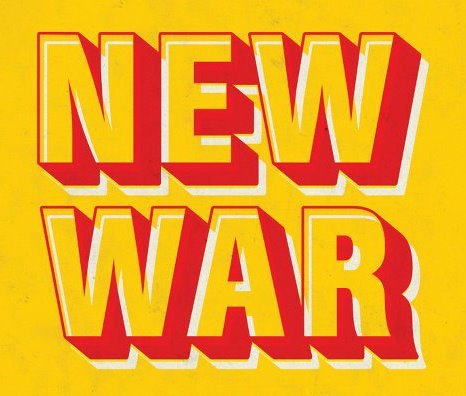 It’s no wonder New War named their debut LP eponymously. War aptly describes this record’s overtones of steely, purpose-built weaponry and undertones of tribalism and savagery. The operation launches with ‘Game of Love’, a song that drags you by the collar from the second it starts, probably because it’s safer to go than to linger in the path of drums that are advancing like volleys of machinegun fire.

Wrong decision. Noise spreads like noxious gas as the song scales a peak; its tendrils curl up your legs. “Come to me, oh come to me,” Chris Pugmire implores, as if those drafted ever had a choice. It plateaus briefly to survey the terrain, then the drums return in ritualistic circular rhythms – a rallying cry – and the mission resumes. “You’ll name your colour, sex and tribe / Your place in law and myth and lore / Now you’ll tread the valley floor / The tide flat and the grove.” There’s no chance to desert. Just screw your eyes shut and wait it out.

With its urgent pulses of synth, the following track ‘Revealer’ also seems to emerge from a miasma of fear. Though calling it ‘synth’ feels a little soulless, because Jesse Shepherd’s keys sound more like shades of alarm throughout this record. Not air-raid sirens, exactly, but in a parallel universe they probably could be. String effects are stretched sharp and thin and – when not elevating tension somewhere – play an almost percussive role on songs like the slow-burning ‘Ghostwalking’. Steve Masterson’s drumming melds industrial precision with a tribal sensibility and, like the interplay between volatile lovers, his drumming and Melissa Lock’s bass are tense yet perfectly in sync.

Raging untethered amid this landscape of exactitude are Pugmire’s darkly vivid visions, by turns soaring and plummeting. “Oxidised by a dead sea scene / I’m killing in a solar daydream / Silted in a sea dredged sky / Carboned out in a junked up sky.” Meanwhile, so central to New War’s sound is this record’s aura of desolation that producer Lindsay Gravina may as well be anointed as band member number five.

In the space where the guitar usually is, everything else blooms. There are four musicians in New War, each of them idiosyncratic and bold, yet nothing dominates. Or perhaps everything does: it’s not clear which. Gravina’s production is the glue that binds their strengths into a whole and encourages different instruments to build then pull back, spearheading their own shortlived assaults

Pugmire ventures beyond the void to deliver the spoken-word episode ‘Felt Like A Memory’, a meditation about disembodiment that sounds remarkably similar to it. “Have you ever laughed without a body? It feels so strange… cold … wide.” ‘Slim Dandy’ follows, a song that’s about as breath-defying as a swift punch to the neck and reminiscent of Big Black at their diabolical best. The skulking ‘Calling From the Inside’ seems at first like a reprieve until gradually, through the dubby smoke-haze of static, you realise you’re belly-crawling towards death. “Walkin’ down, into the water where I / Kill the men / Kill the women / Kill the children / … Carrying up the dark.”

‘Black Sea Cantos’ evokes the spiky hostility of The Birthday Party with the loose-stringed swing of the bass and Pugmire’s yelps and squawks, while on the final song, ‘Josef’s Hands’, anchored by a bleakly mechanical kick-drum, Pugmire seems overcome by the ghoulish forces he’s responsible for summoning. On this final track he appears to reason: “If I’m going, I’ll take you all with me.”

This record isn’t ambitious, inasmuch as ambition implies strategy. It doesn’t aim high and deliver, inasmuch as those things imply a hubristic slam-dunk. Yet it is, undoubtedly, all of these things. But down to a note and down to a lyric, it feels as though anything other than what New War has delivered here was never an option.