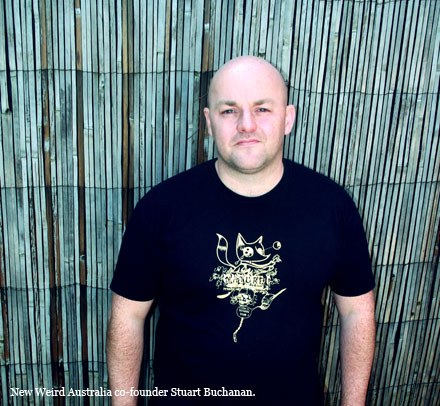 New Weird Australia (NWA) slipped onto the scene in July 2009, releasing Volume One in a compilation series featuring new, eclectic and experimental Australian-only music. Available for free from the NWA website, it has so far racked up 3000 downloads, with Volume Two released this month.

There’s no specific theme or genre. Bluegrass glitch and free-jazz nestle alongside “sprawling sample ephemera” and psychedelic folk on the two compilations, which total 31 tracks. If it’s fucking with conventions, NWA founder Stuart Buchanan will give it a discerning ear.

An online label for now, Buchanan has quietly ambitious plans to build on NWA’s early successes and extend it into other areas. Just don’t ask him what yet, because he doesn’t want to rule anything out.

Why did you start New Weird Australia?
It’s a passion project. Like any passion project there’s a gap in your life and nothing is filling it. So you end up doing something about filling it yourself. I was looking around looking for a space, a site, a project that really promoted experimental Australian music and, not being able to find anything, I decided to do it myself.

Danny Jumpertz came on board as co-producer. He’s been running a label called Feral Media for five years which is almost exclusively Australian music. I have known him for ages and we’ve always wanted to work together and this seemed like a natural fit.

But there’s Mess+Noise isn’t there? And Cyclic Defrost?
Yes, there are websites, journals and blogs that cover the sound editorially but I wanted to develop a comprehensive audio resource, where a wide variety of artists and sub-genres were readily available via downloading or other means. Cyclic Defrost promotes Australian experimental music but it takes a broader international view. We saw a space to focus exclusively on Australian music.

It seems like a pretty obvious idea. Why hasn’t it been done before?
I don’t know! It does seem obvious and that’s partially why I was so surprised when I couldn’t find anything. But the reaction has been so overwhelmingly positive there was clearly a need for it.

Tell us about the live stuff at Sound Summit?
Sound Summit co-director Eliza Sarlos approached us with the idea of a NWA showcase at This is Not Art, featuring some of the artists on the comps. Of course we were delighted to take part. It’s a great opportunity to showcase the fantastic music coming out of Newcastle, which is presently one of the most fertile places for experimental music, and also we’re playing in the Renew Newcastle spaces, which is exciting. The NWA showcase takes place over three different venues on October 4. It goes for eight hours with about 11 artists including Holy Balm, Lucia Draft, Tom Smith, Gugg, Castings, Alps, Brutal Hate Mosh and moonmilk. And it’s all free.

Do you classify NWA as a net label?
It’s the main component right now. Initially we’re happy to be a net label, but if I said NWA was a label that might limit it from the get-go … so we’re keeping it broad and open right now. As more platforms emerge things might change. We have ambitions to do more live events after This is Not Art next year, around Australia, so who knows where it might go? How do you put the compilations together?
When we started out with Volume One it was a proactive process. We knocked on doors and got a really good response but it was essentially me choosing 15 tracks I thought would make a good first pitch. By the time we got to Volume Two we had lot of people knocking on our door saying they wanted to be part of it. So now it’s a mixture of proactive and reactive.

There’s no theme, except new, eclectic and experimental, right?
Yes. It’s also important to say the selections are experimental in the sense of whatever genre you’re working in. I didn’t want it to be abstract for abstract’s sake or pure sound art. But I wanted to include both of those, and more. If you’re working in the folk genre and doing something pretty experimental and breaking rules and conventions then that has a place as much as anything else. Thus far, we’ve included everything from psychedelic folk, free jazz, abstract electronica and post rock. Anything that is fucking with conventions and thinking differently, we’re interested in. I think that’s what people respond to positively, the diversity.

Do you need to have a fairly good understanding of music, and possibly even music theory or practice, to determine if something is “breaking conventions”?
I have little patience for the idea that you need to have an academic qualification to have a valid opinion – it’s a bogus argument. If you have a passion for music and – more importantly – if you approach everything with a truly open mind, then you can very clearly identify when something breaks the mould. I am also open to the idea of bringing in guest curators. This might be people who can help compile a volume or even do a whole volume.

Worried your personal taste might get in the way?
Yes, a little. That’s why I bought Danny on board as a partner. Our tastes do overlap but we’re a good check and balance. We pull in slightly different directions and attract different types of music. Tell us about the NWA radio show on FBi?
I presented a show on FBi called Fat Planet for years that was purely international music – complete opposite of NWA. After five years of that I realised I was missing out on a lot of great Australian music. So I put it to bed and approached FBi with the New Weird Australia idea, which they were happy to put to air. The show gives us the chance to play stuff that didn’t make the compilation and also expand the NWA platform a bit and do interviews and live performance to air.

Do you see NWA as a brand people will begin to associate with experimental music?
Yes, and I don’t shy away from that. In many respects you have to cultivate an identity and do it consistently in order to get people to pay attention, especially those who aren’t predisposed to pay attention. It’s important for me to find a way to take what we’re doing and push it in an international context. To try to get people overseas and prick up their ears and get international blogs and websites to take notice. My experience with Fat Planet has taught me that the message can spread in time – if the music is good enough, then people will pick up on it, and word will go viral. That’s part of the reason we called it New Weird Australia, because it piggybacked on and played with the idea of New Weird America. It might ruffle some purist feathers, but it will hopefully get more people to take notice. And what’s not to like about the initials NWA?

OK, so part of NWA’s mission is to promote “alt-Australiana” internationally. Isn’t this focus contrary to building something strong and self-sustaining here?
I don’t see the two as being mutually exclusive – they run in parallel, and feed off one another. Digital music delivery has all but broken the notion that there is a hard divide between local and international distribution, and we’re just one of many who are taking advantage of that.

How does NWA’s model fit into the free downloads/struggling artist paradigm?
It plays alongside that paradigm. It acknowledges that part of discovering new music is being able to download, for free, in order to sample music. The belief that every download is a lost sale is a myth. Many people, if not the majority, will download just to sample, to take a punt on something. It’s how most people now sample new music; not via TV or radio or streaming tracks. NWA provides enough “free” music to allow people to sample an artist, and they’ll hopefully engage further if they find something that resonates, by buying an album or a gig ticket etc. Would you consider charging for downloads?
The “no cash” model feels like the right way to go for the time being. No one can possibly get ripped off as there’s no money anywhere in the chain. Free also means limitless distribution and easy viral distribution, which is the whole point. We might release artist albums, or other types of formats, in time that follow a more traditional retail model, but it’s not the primary objective.

Birthed any superstars yet?
Well, not yet but we’ve had more than 3000 downloads of the fist volume. When you think a lot of these artists have never released anything before, or were selling 50 copies of their stuff in Australia – if they were doing well – that’s a good result.

Independent record stores such as Waterfront and Red Eye [in Sydney] were so important to people like me growing up. Do you see parallels between music stores of old and online labels such as NWA now?
It’s a huge question, we could write a thesis on it. I think we’ve always aligned ourselves to critics and curators in order to find music. Essentially that’s the role of a good indie store, we rely on their stock list to guide us, and we take pleasure from finding ourselves in the company of kindred spirits.

But when we don’t have a good record store nearby, or we want to find something from much further afield, then blogs and net labels will easily perform that function. My blog roll has been gradually whittled down to a handful of impeccable curators whose judgment I rely on almost 100 percent. That level of trust only comes from kissing a legion of frogs and trawling through mountains of shit. But thank fuck I’ve found them.

That said, I still love walking into somewhere like Repressed Records in Newtown and sticking a 7″ in a brown paper bag – I doubt I’ll ever find a way to beat that minor thrill.

What’s been most surprising about the project so far?
How quickly it all came together. From the first idea to the release of the first volume was only a few weeks apart. And that’s purely down to the support and trust of everyone involved. It shows you don’t need to sit around planning and scheming forever, just get your work out there. Clarity through action. If you fuck up, so be it – at least you’re moving things forward.