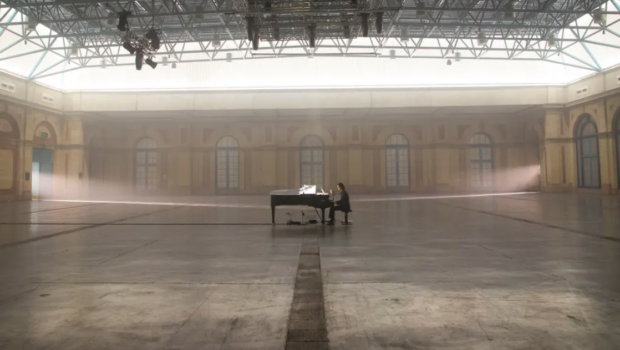 In pre-pandemic times, a concert such as Nick Cave’s Idiot Prayer would have been called a solo show. Not so this one, filmed by Academy Award-winning cinematographer Robbie Ryan and billed as Nick Cave Alone at Alexandra Palace. Only a musician can be solo, the title suggests, but we can all be alone – especially now. Photo: Joel Ryan for The Guardian

The nod to our shared predicament is no accident: it embodies Cave’s latter day quest to connect deeply with fans. In Andrew Dominik’s extraordinary 2016 documentary, One More Time With Feeling, Cave is shown reconciling his son’s death and finding solace in the universality of grief. Then there’s his website, The Red Hand Files, where he earnestly answers fans’ questions, an idea that spun into his Conversations With Nick Cave tour.

It’s this potential for connection – more so, even, than the fancy setting and the promise of the kind of high-end production that’s been absent from so many live streamed gigs – that presumably spurs people to pay the $29 fee to access a concert filmed a month ago that can’t be paused or re-watched. And you know people are “here” because a stream of heart-eye emojis ascend from the corner of the screen. It’s the only emoji available – no booing in the palace, thanks.

In the opening shot, though it’s a hard floor, we can’t hear Cave’s footsteps as he stalks his black Gucci suit to the piano in the middle of the vast empty hall. A prescient detail because despite Idiot Prayer being little more than artfully filmed and lusciously lit piano songs, it’s the silence that’s most notable. It seems to gnaw into the end of songs and stay throughout too, as if Cave were singing to ward it off. Which is not to say the piano sound is swallowed-up by the cavernous space. No, it’s as warm and velvety as a cocker spaniel’s ear.

The songs span most of Nick Cave and the Bad Seeds’ career, reaching back to 1986 record Your Funeral with Sad Waters and Stranger Than Kindness. As with any Cave gig, it’s a constant tussle between savagery and sentimentalism. These days, I find the former the most thrilling such as his history-spanning lyrical flexes that fan out from “The spinal cord of JFK/Wrapped in Marilyn Monroe’s negligee” to “A custard-coloured super-dream/Of Ali McGraw and Steve McQueen”, which we hear on Grinderman’s Palaces of Montezuma.

There’s just one song from Skeleton Tree and two from Ghosteen which is briefly disappointing until you realise if he’d played more, the older songs would have been unwelcome alien invaders, so all-encompassing are the worlds erected by Cave’s most recent two records.

The Mercy Seat, Higgs Boson Blues and Jubilee Street are highlights and it’s perhaps no co-incidence they’re bangers compared to some of his other selections. Waiting For You, meanwhile, breaks new ground by default of Cave sounding, well, old; relinquishing his baritone for a moment to sing with a strained upper range that’s as rough and real as a fraying rope.

Even when viewed through the prism of parable, Cave’s songs have pathos enough to fill any palace. It means Ryan’s camerawork must resist extra flourishes at risk of the entire collaboration collapsing in on itself like a self-saucing pudding. Which fortunately, he does. Yes, there are close-ups but they don’t linger longer than they should. And some of the most striking shots are from above or from quite far away, enhancing the sense of silence, loneliness and space. It’s a perplexing touch, then, to pan suddenly back to reveal a cameraman in a tee tooling along doing his thing during Higgs Boson Blues – so jarring as to seem more like a blooper than an artifice-shattering shout-out.

And then, there is the light. At times it mimics the soporific golden glow of mid-afternoon, at others the bloodless blue hue of dawn. Sometimes it’s a stormy night; at others a red malignant glow. As it accrues it disorients, until you feel utterly unmoored from time and place, rather like another famous palace, St Petersburg Hermitage, in Alexander Sokurov’s 2002 film, Russian Ark, which in the final scene you realise is not on land at all but bobbing over an unknowable sea.

Ultimately, though, Cave stands up and walks away and we all click off. And Idiot Prayer is over and it is beautiful but in the way of an object to admire from the outside because it’s too polished to crack open and crawl inside.