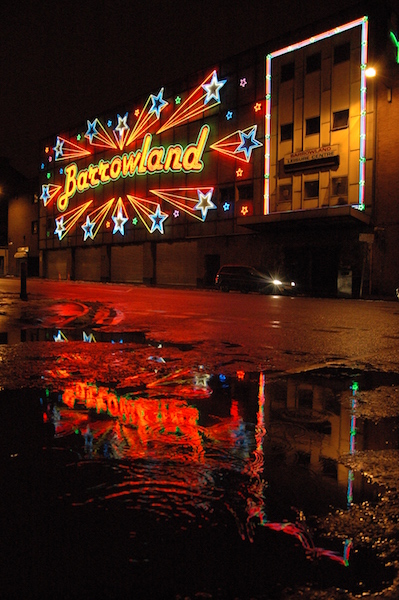 Nights out in Glasgow

Pavement and pub fuse in a way that supports the Scotia’s claim to be Glasgow’s oldest. It is close to the River Clyde. The ceiling is low and the wood is ruddy – it’s like drinking in an overturned boat. The pub’s regulars are huddled around a guitar, singing. No sooner does one slip out for a fag, another returns, breathing mist as the door swings in. They drift from Scottish traditionals to Pink Floyd. “Mother should I trust the government?” one sings. “No!” the chorus bellows back.

It’s only a singalong but it represents the cynicism many Glaswegians have towards established interests. On the wall is a framed copy of the declaration of Scottish independence and photos of Che Guevara and Nelson Mandela. “We’ve always been a bit socialist in Scotland,” a solo drinker says. “Not in a political sense, in a look-after-people sense.”

Talking to strangers is easy here. Leading with a joke goes down great, too, and even better if it’s dirty. Your standard Glaswegian will sling one right back. At another pub, the bartender seems a little dour. “People’s kids get away with murder these days,” he says. “So do people’s dogs,” I say. “Aye,” he says. “We don’t let dogs in anymore. Well, only in the kitchen”. There is a rumour that when Billy Connolly was a welder at Glasgow’s shipyards, he wasn’t even the funniest guy there. That was another welder.

I know I’m making sweeping statements about the locals of a place I’ve only been for a week. But is this not travel’s chief joy? Falling fast and hard, then leaving before the affair sours into marriage? I can generalise about the residents of Paris, Istanbul and La Paz. Ask me what typifies a Sydneysider, though, and I’ve got nothing. The truth you can see in a new city’s outline fades as it gets filled in.

Pentangle, a folk band from the 1960s I grew up listening to with my dad, used to play at the Scotia. Oasis fans pay homage at King Tut’s Wah Wah Hut instead. I pop by the next night. They’re busy but a manager shows me around anyway. The band room is no-frills with a wooden floor warped by thunderous stomping. “Bands that play King Tut’s get big,” he says.

When Oasis drove up from Manchester in 1993 they came straight to King Tut’s and got on the bill. Alan McGee of Creation Records was here that night. “After one song he was interested, after two he knew he’d sign them, and after three he knew he’d do it that night.” The manager gestures to the bar. “Him and Noel sorted it out there afterwards. Blows my mind.”

It is the time he spares to tell me, more than the story itself, that is most endearing. And it happens everywhere. People are hell-bent on convincing me of the city’s merits in a way I don’t imagine Edinburgh residents are. Perhaps it’s because Glasgow now is so different to its reputation as the glum post-industrial backdrop of a Ken Loach film. “Once you have a reputation it’s hard to shake,” says a cab driver. “Those that make the trouble are as thick as two short planks.”

I front up unannounced at another legendary venue, Barrowland Ballroom, on a Sunday. In a musty office a tour is arranged by a huddle of men as old as time. My guide has worked here for 27 years. He trudges in front, thunking on heavy switches to light the unchanged 1950s decor, then sends me onstage and hollers up: “Where you’re standing is where David Bowie stood when a star fell off the roof. ‘Starman’, that’s from here.”

Last night’s Barra show was especially boisterous, he says. “The band play Irish Republican music and a lot of Celtic supporters come in jumping and shouting and banging on the walls.”

Nestled in a brick arch beneath some railway tracks is the Poetry Club. There, saxophonist Peter Brötzmann is backed by an incandescent free jazz trio as trains rumble overheard, shaking the room. Afterwards, a local draws maps of places I should go in my notepad. He keeps flipping pages to draw more. “Where’ve you been so far, Keet?” The Rs in his sentences are rolled and the vowels curl elaborately around the consonants. In Jonathan Glazer’s film Under The Skin, when Scarlett Johansson pulls up in her van to seduce blokes on the street, I couldn’t understand their Glasgow patter at all. And occasionally here I don’t. It’s like being in a country where you don’t speak the language so you clock off and let it wash over you; voice devoid of meaning.

My face feels as though it may shatter in the icy air but I do the double-decker tourist bus twice because the accent of TV presenter Neil Oliver, who does the voiceover, is such a delight. Even through the crummy bus headphones, his tone goes teary with pride as we glide by the SSE Hydro. The arena, which opened in 2013, is “made from space materials”, he boasts. It is “the third-biggest in Europe” and was “voted most stylish”.

Stadium concerts are not my thing but the restaurants in nearby Finnieston are. With thousands drawn to the area for concerts at the Hydro, a steady stream of eaters and drinkers quickened Finnieston’s gentrification. My meal at Ox and Finch on Argyle Street is one of the best I’ve had in any European city. Eating sea trout ceviche, I recall the sufferance of shows at Australian arenas where you’re cattle-prodded inside for a quick Snickers dinner and a beer in a plastic cup. The assumption that people who like contemporary music are bovines with no taste or tastebuds is a grievous misapprehension in Australia.

In Sydney, we’ve barely got any venues left, let alone nine in one neighbourhood, as Glasgow does around Sauchiehall Street. The family home of Chae Houston – founder of music platform Tenement TV, is a classic tenement house. In 2011 he started filming bands in his sitting room and the idea took off. Now he runs the Tenement Trail music festival, luring nearly 2000 people to Sauchiehall Street’s venues. The scene is just getting better, Houston says. “All the bands say it’s the best crowd to play on tour. We’re wild but we’re nice-wild.”

Actually, Glasgow crowds are known for being off-the-hook bananas. And in this case, the rep is deserved. We have many names in Australia for the dreary arc of emptiness that forms up the front at gigs. “Sydney Cove” is one, In Adelaide, they call it “the Bay”. There is no name for the “moat of indifference” or the “circle of fear” in Glasgow.

It is a UNESCO City of Music – the technical term, perhaps, for gigs at which the men roar and the women scream. Applause is like that following curtains on a hit Broadway show – after every song. At a venue called Stereo a woman reaches up to ruffle the shirtless singer’s belly fat; later a guy tweaks his nipples. Nice-wild, indeed.