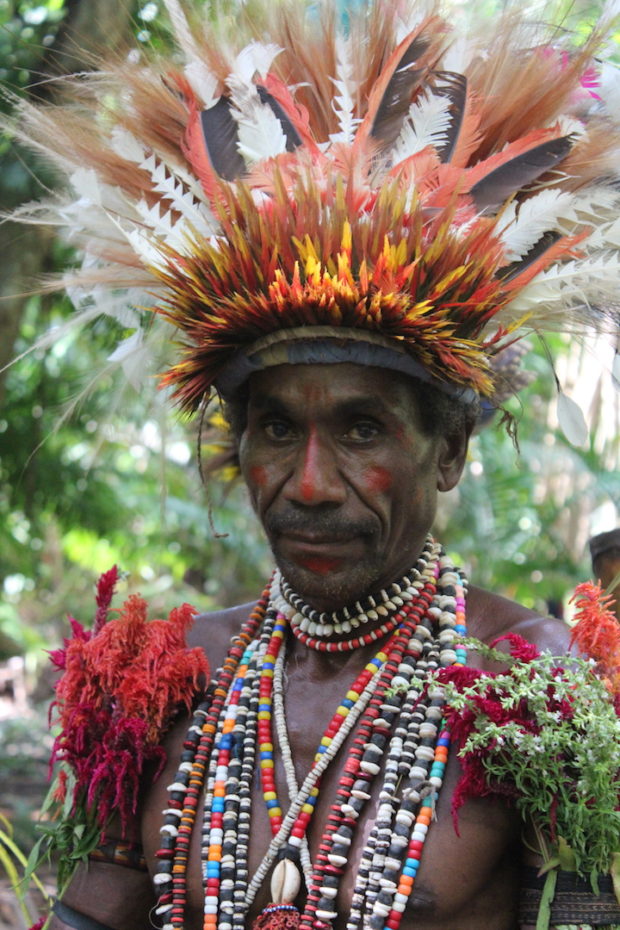 No roads out of Tufi

Virgil and The Craybobs are Tufi’s local family band. By ‘family’ I mean Virgil, Frank Jnr, Elvis, Priscilla, Jane, Marckzin, Freda and Mukawa are the many children of Tufi policeman, Frank.

By ‘local’ I mean even if The Craybobs wanted to gig elsewhere, there are no roads out of Tufi. The last road is at Popondetta, 120 kilometres away. A “few fjords over”, says Frank, is as far as the band’s sunshiny harmonies and ukulele will resound. Most fjords are created when glaciers erode. But when Yamewara volcano erupted 10,000 years ago in Papua New Guinea’s Oro Province, its lava flowed into the Solomon Sea, splitting and hardening into many-fingered fjords.  The water wends back into dense forest where Birds of Paradise dance and people still live traditionally, fishing from dugout canoes and farming family gardens.

Excluding Port Moresby and a few larger towns, roads are scarce right across PNG, meaning its people are some of the world’s most isolated. Four out of five Papuans live in remote coastal areas or rugged mountains – Tufi is both. For tourists who won’t explore by foot or boat, travel is limited to places with an airstrip.

The plane stops in Popondetta to collect four Australian Army reservists who’ve just finished the Kokoda Trail. “There were hard days and easy days,” says one, before admitting, “even the easy days were hard.” The men are seeking some R&R at Tufi Resort and a taste of the region’s diving. For war history enthusiasts – as many Kokoda Trail-walkers are – Tufi is a natural next stop due to its wreck diving. Two torpedo boats were sunk here during a 1943 air raid and, just off the jetty, they lie on the sea floor along with machine guns, ammunition and a couple of live torpedoes. Further out is a Dutch Navy ship and a U.S. Bomber.

Built on the edge of a fjord, Tufi Resort is the area’s only tourist business – and, seemingly, its only business at all, bar a bunker-like general store among the sheds on the jetty. Its broad verandas, cane furniture, carvings and weaved straw walls give it a breezy retro feel and a gin and tonic is easier to order than a fresh coconut. It’s a popular getaway for ex-pats – mostly miners and diplomats who double ably as drinkers and raconteurs as they blow off some big-city (Port Moresby) steam. The region’s pristine coral reefs, diverse marine life and 50-metre visibility also lure divers from around the world. “I typed ‘dive’ and ‘remote’ into Google and this came up,” one tells me. “You have to remember where you are,” says resort owner, Linda. And in case the answer were not apparent as we gaze across the fjord, the smell of cooking fires in the humid air, and a Blyth’s Hornbill flapping goofily by, she tells us: “You’re in the middle of nowhere.” Alone on my balcony at night, geckos tut-tut from the jungle and I am overcome by the exhilarating speck-on-the-ocean feel that is distinct to the Pacific Islands – even the biggest of them all, PNG.

To exist amicably among the Tufi clans, Linda and her husband Tony have a sharp sense of social responsibility. They maintain the airstrip, facilitate homestays in adjoining fjords, arrange cultural tours and try to ensure gifts from tourists are evenly shared among locals. “We’re not just the only wage payer here, we’re the lifeline of the community,” Linda says. The resort employs a small percentage of villagers but the money is spread among the employees’ families (wantoks).

Choppy waters thwart our first attempt to snorkel the outer reef. Back on the boat, I retreat to the top deck to stave off nausea. Both guides pop up to ask “Are you OK?” then bring me tea. Given how often they must deal with seasickness, their concern is touching. They stay with me – mellow men who are better at silence than small talk.  “Boat,” says one, pointing to an empty sea. His colleague nods. It’s five minutes until I see it materialise, still a blurry dot on the horizon.

These men have been on the water all their life and it’s fun to watch them steering boats through treacherous coral reefs. Partly because they are so effortless and partly because their faces are so textured and expressive that, if they also had fame, they’d be courted by painters eager to win The Archibald Prize. People-watching is a joy in PNG.

In 1972, Tufi was wiped out by Cyclone Hannah. When the strongest trees in the forest – the coconut palms – started snapping like matchsticks, the locals ran. “There were no [folk] stories of winds that strong,” says Swedish photographer, Jan Hasselberg, who wrote a book about Tufi. “They stood in the grass believing the world was ending.” It would be another three years until PNG gained independence from Australia in 1975, which was fortunate because aid arrived swiftly. The ’72 cyclone formed an island of broken coral known as Cyclone Reef, undisturbed by trade winds. Unlike our first snorkel, it is calm. Multi-coloured coral formations bloom before me like a sped-up reel of alien planets from Star Trek and, behind, the reef drops away, deepening from aqua to navy blue. A school of fish splits and swarms around me and their oblivion to my presence feels something like freedom. The Pixies song ‘Where Is My Mind?’ plays in my head, my mask mists up with awed tears and I flipper around grinning, wondering if I’ll see a rare white hammerhead shark, as many here do. Water trapped in my snorkel makes it purr softly.

Australians worry about safety in PNG. More Australians, it should be noted, than citizens of other countries who haven’t watched decades of news reports about Port Moresby crime or unrest in the highlands. There has never been a violent attack on a tourist in the Tufi villages. The people are gentle and dignified and although the women lay down ‘stalls’ on strips of grass, hoping to sell shell jewellery, weaved bags (bilums) or bark cloth (tapa), there don’t hawk or hassle. When I apologise one day for looking, but not buying, the re-assurance is flipped. “It’s OK,” says the craftsperson, all empathy. “We’ll be here, friend.”

For reasons out of their control, the villagers’ crafts are not as cheap as in other developing countries – but neither is the cost of living. Many blame the money netted by large mining and development projects for driving up costs for services such as air travel, most recently the ExxonMobil LNG project, which began producing natural gas last year. “The miners pay off the landowners and that’s it,” says a jaded expat. Another, from the Australian High Commission, says, “Things are gradually getting worse – money is coming in but it’s not reaching the places it’s supposed to.” With its health clinic in ruin and other basic services lacking, even for women giving birth, there is a genuine sense of abandonment here.

To attend high-school, Tufi’s young people must board in Popondetta and pay a tuition fee. That fee is an enormous impost on locals with little to no income; impossible, even. Walking through Tufi one day, I meet Elvis. My pace slows to suit his – men amble around here, barefoot, carrying spades across their shoulders, chewing betel nut, gently greeting those they pass. I ask what he does. There is a pause as I realise there is little employment in Tufi but he answers gracefully. “I’m a family man. I have five children so I fish and look after the gardens.” This system of traditional land-ownership is the social security net – not the government. And any extra money (kina) helps – something tourists should consider before deciding against a second souvenir. The first women I see with a tattooed face is a surprise. A few days later, I barely notice it. The tattoos are distinct to this area; an initiation rite to show a girl is ready for marriage. It is far less common now as girls who wish to travel for school or work do not want people staring. Most you see are faded blue-black on older Tufi women – still lovely, though, and designed to emphasise feminine beauty.

We boat out one day to a more remote fjord. Men in narrow canoes paddle up in traditional dress and we transfer onto platforms balanced on their canoes. Wordlessly, they row us down a fjord then down a river, deep into a sago palm plantation where “spirits and sorcery run wild”. Out of the boat, shoes off, we navigate roots and swamp towards a sacred clearing. Men with black-painted faces and spears jump out of the jungle, shouting aggressively; an intimidation ritual.

Women with Frida Kahlo-esque headpieces shower petals on us, chanting “Oro! Oro!” – the name of the province but also the word for “Welcome”. Every smile you give is sweetly returned. We’re shown how to harvest every part of a sago palm and the method of traditional tattoos. Then, best of all, a song and dance (sing sing). Men approach beating drums made from rosewood, lizard skin and lumps of honeybee wax for tuning. They sprout flamboyantly feathered headpieces that fan out as they prance; their costumes so decorative, you barely know where to look. Then, the singing starts and ancient-sounding harmonies crowd the air. Meanwhile, the sago palms tower over us in this jungle where every trunk, leaf, root and butterfly is super-sized; where even the bird noise has ratcheted up to a cacophony.

So yes, while this is a performance, it is in an utterly wild place, and it doesn’t feel manufactured. We are not watching an artefact, in any case, as such sing sings are still common clan events in PNG.

It is on our last night that Virgil and The Craybobs play – the boys in grass skirts, the girls in bark cloth, frangipanis in their frizzy hair. Frank says he loved listening to Kenny Rogers and Donny Williams on the radio but now it’s up to his band to bring the songs. “Popondetta had a radio station but it’s broken down now.” As Tufi’s policemen, Frank has plenty of time to jam. “I’m not busy every day. It’s very peaceful here.” Get there
Air Niugini operates 27 direct flights to PNG weekly from Cairns, Brisbane and Sydney. The airline operates a code share with Qantas.

Stay there
Tufi Resort offers year-round diving, culture and relaxation. Package start from start from AUD$750 for five nights including accommodation, meals and airport transfers at Tufi. Local homestay are highly recommended and can be arranged in advance through the resort