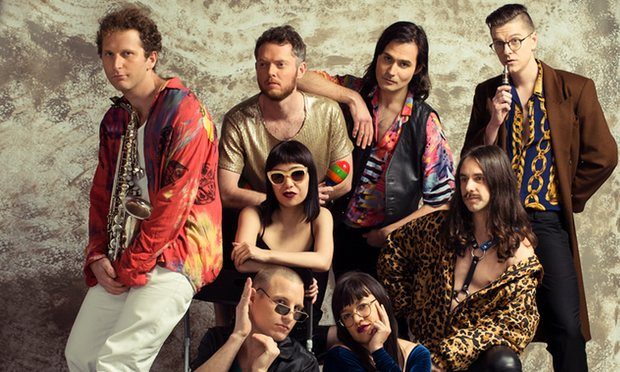 Deep in the throng of an early 90s Athens disco, men in puffy sleeves are playing sax. There are Latin American percussive jams, shouty female vocals a la the B-52’s or ESG and styles that swerve from acid house to Italo house. Mashed up, but spaced-out, No Zu are the fusion you’ve been craving since your crop top, hot pants and whistle were laid to rest.

The “heat beat” of this visionary Melbourne eight-piece celebrates a bygone era of clubbing. Unlike a lot of referential music, No Zu are possessed by the past instead of scholars of it – so their dance music is heady and hedonistic, first, and clever, second. Somewhere in the euphoria they raise themes of multiculturalism, colonialism, Australiana and body image – but they don’t know where to put them. Are they pro? Anti? On the rabbit-proof-fence? No matter. Their show at Golden Plains was wild and woozy and the lyrics chanted by Becky Sui Zhen and Daphne Camf resonated with feminist ‘tude. “You follow, with your eyes / Don’t you follow, evil eye.”