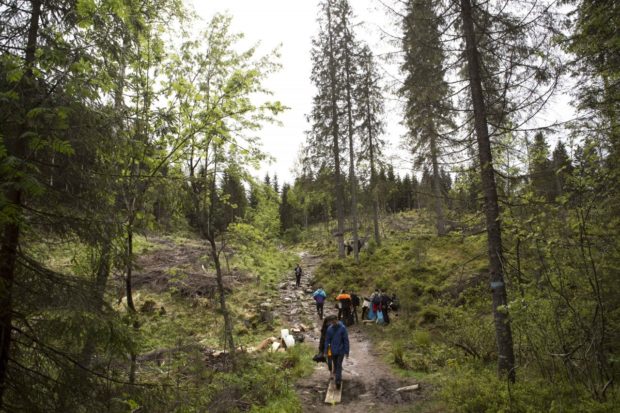 “I have finished writing my contribution to Future Library,” wrote Icelandic poet and novelist Sjón on April 27, 2017. “It is a moment of relief and exhilaration, of exhaustion and joy. From this moment on I have entered the next level of the game, where I must keep a secret to the end of my days.”

Sjón had followed authors Margaret Atwood and David Mitchell into an extraordinary durational art project by Scotland’s Katie Paterson called Future Library. Turkish writer Elif Şafak is next in line for 2018. No one alive now will read their words. The manuscripts – and those of 96 authors to come – are closed books for 100 years, secured in Oslo’s main library. The denial is a shock. Who waits for anything anymore?

In 2014, a team had hiked to a cleared hillside in the northern part of the wilderness that encircles Oslo. They planted 1000 Norwegian spruce trees and tied ribbons to their little trunks. A sign was nailed up saying: “Framtidsbiblioteket/Future Library”. In 2114 the century-old trees will be pulped for paper on which to print the 100 manuscripts in anthology form. Or perhaps not printed – no one knows how we’ll be reading. But Paterson hopes it will still be books. “We’re growing a paper book and trying to cement that outcome into the future,” she says. “The printed book has survived this far and I can’t see how it could be improved on, but you never know.”

I visit the forest with Future Library trust chairperson Anne Beate Hovind. She is tanned and athletic, full of forceful enthusiasm. “When you meet Anne Beate,” Paterson had told me, “you’ll find nothing’s a problem.” On the drive to Nordmarka Forest in her electric car, Hovind tells me her line in Norway is long: “I grew up on a farm that’s the oldest in the area – 1000 years old. There’s Viking graves on it and Viking offering places.” Indeed, her surname means “Viking grave”.

In Nordmarka , elfin children forage for blueberries and star-shaped flowers gleam from the boggy ground. When we arrive at the baby forest, Hovind takes a photo of us beneath the sign. “I’ll send it to Katie,” she says. “We’ve become very close – part of committing to a 100-year thing.”

Each spring the new author completes a handover ceremony here. We sit near the tree stump that Margaret Atwood, the project’s inaugural author, spoke from in 2015. “I am sending a manuscript into time,” Atwood said. “Will there be a ‘Norway’? Will there be a ‘forest’? Will there be a ‘library’?” The ceremonies have become rituals now. At Sjón’s, conducted last year, his mezzo-soprano wife sang. Pilgrims have begun arriving too. “I think this is going to increase,” Hovind says.

“I’ve had to explain [the artwork] to people quickly,” I tell her. “You know, over breakfast. So I say ‘everyone involved will be dead’.”

“Dead!” she exclaims. She’s enjoying it – you can tell. The August sun on her skin – when the Scandinavian day is long – and some journalist from Australia, explaining how she unravels the art project to others across the world.

“Yeah, dead. And that’s when people go ‘wow’. You can see them thinking, ‘Why would anyone want to be involved, then?’”

Yet Sjón approached the trust, not vice versa. Atwood took just three days to say yes. Past works have seen Paterson broadcast the sound of a melting glacier live and return a recast meteorite to space. Her reputation as a conceptual artist precedes her – and will likely succeed her too.

Though who knows how? Perhaps when the collected texts exit hibernation in the 22nd century her work will be deemed magnificent. Perhaps it will be mocked. Or maybe future earthlings will be as captivated by Oslo’s cultural cargo as we are today by NASA’s Voyager Golden Records: Carl Sagan and his team’s account of humanity, time-capsuled in 1977, and aimed at an audience of extraterrestrials.

Included on the Voyager spacecraft were a cartridge, a stylus and an instruction manual. The Future Library required contingency planning too. Anxious that the means of production may become obsolete, the trust is buying a printing press and, yes, a manual. David Mitchell told Wired magazine in 2015: “Chances are, no copies of Cloud Atlas [which Mitchell wrote in 2004] will still be around 100 years from now. In a weird way, this work is safer than all of my other books.”

Both endeavours ache with a hope that if we think laterally enough, with sharp and open minds, then this single story, at least, can end well. It’s a hope that feels nostalgic, like something we’ve already lost, though that could be its optimism. As Mitchell said at his handover: “We have to trust our successors, and their successors, and theirs, to steer the project through a hundred years of political skulduggery, climate change, budget cutbacks and zombie apocalypses.”

Until then, the texts will dwell in a small, curved room on the top floor of Oslo’s new library, Deichmanske bibliotek, due to open in 2020 as part of the high-stakes Bjørvika development on the city’s sparkling waterfront. Library director Knut Skansen says its location has been debated for decades. The unanimous delight that’s greeted Paterson’s work has been a welcome respite. “The whole concept is so nice,” says Skansen, his voice swollen with pride. “Everybody who learns about it and connects with what happens up in the woods, they get tears in their eyes.”

Architect Nils Ole Brandtzaeg shows me a scale model of the room in its final stages of meticulous design. It had to be made from the old forest wood, says Brandtzaeg, which was too soft. The workaround was slicing it into thin layers. One hundred layers, in fact, “so it relates back to the 100 years”. Each printed manuscript is a unique document – the only other copy is held on a USB drive, for back up, after its author deletes all personal files. When a manuscript is placed in its special drawer a gentle light will glow from within. The room will face the forest, 11 kilometres north. With each person’s input, Future Library accretes another coating of attentive beauty.

When the idea was floated with Oslo’s chief of forests, Jon Karl Christiansen, he thought it was “a bit strange”. We meet beneath the looming library site, spiky with scaffolding, tools clanging from up high. “We foresters are pretty conservative types,” he says. “But we have a 100-year perspective anyway and it struck me that Katie Paterson was making that into art.”

Paterson believes the idea resonated in Norway in part because of its knack for long-term thinking. “It’s a [risky] work for a city to commission but … the setbacks you normally encounter with big public artworks haven’t happened,” she says. Later, I reflect that here, after all, is where the world’s best attempt to insure against mass seed loss is located: the Svalbard Global Seed Vault on Spitsbergen Island.

In May last year, the Mayor of Oslo gave the Norwegian royal couple, King Harald and Queen Sonja, six art prints for their 80th birthdays. The prints feature 100 tremulous, hand-drawn tree rings and double as certificates redeemable for the 2114 anthology. An idea that came to Paterson while idly sketching on a train now exists as an heirloom for Norway’s royal descendants. Milestones such as this bring Hovind great relief.

“Do you believe it will make it?” I ask.

“In the beginning I didn’t know,” she says. “Maybe they’ll want to build houses around the forest. But now, I think it will. The ownership is being transported to the municipality, to the people, to the world, watching on.”