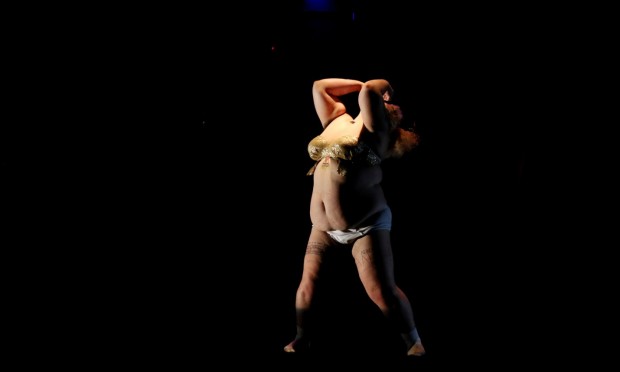 First published in The Guardian, January 2015

In New York in 1936, Josephine Baker scandalised the city by dancing the conga in a skirt laden with phallic tusks, knocking down male performers one by one. Baker’s dancing had been popular for a decade in liberal-minded Paris and would be seen as child’s play today. Controversy, obviously, is fuelled by time and place.

Which is why dance theatre piece Nothing To Lose – about the experience of being fat – is so relevant here and now. So relevant, it’s astonishing that Sydney dance company Force Majeure’s work is pioneering. Using bodies to express what it’s like to inhabit the most reviled body type: surely this has been done before? But in a month when Sydney is alight with festival events, the world premiere of Nothing To Lose has sold-out its five night run and received media attention across Australia and abroad. Commonly, theatre finds its power in resonating long after you leave. The work of Nothing To Lose, however, begins before you arrive. You applaud the topic but worry its execution may not be elegant, then question why you’re doing both. To its immense credit, however, my mind is clearer when I leave than when I enter.

The piece begins with big bodies splayed on a dimly lit stage in positions suggesting sloth. To the sound of dark ambient techno they begin to squirm, slide and find each other; to create new configurations of flesh. The ooze is hypnotic, immediately proving artistic director Kate Champion’s claim that the bodies of skinny dancers would not work for this piece.

The premise continues. The sequences Champion and her artistic associate, Kelli Jean Drinkwater, have choreographed bear little resemblance to anything I’ve seen on a dance stage before but not just because they are performed by a cast of exclusively large-bodied performers.

No choreographer would position a thin dancer’s body on a podium and instruct them to sink their finger, then their whole fist, into their belly button, as though extracting some horrible parasite within. No thin dancer would – or, crucially, could – stare bluntly into the audience while grasping the flop of flesh above their underwear and letting it drop and wobble. And it would take the landing leaps of an impractical number of thin dancers to make a stage creak, shudder and suffer as it does throughout this highly confrontational, yet very often playful, piece.

Speaking of suffering, there is lots here. While flesh is squeezed into incredible Giger-esque shapes and the sexuality of bigger bodies celebrated with burlesque feathers and stripper stalks, frustration and self-loathing are necessarily addressed too. The former, in a gruelling sequence that simulates self-harm; the latter in a volley of words used to label fat people. There are jabs (“chunky”, “roly poly”, “pig”), those that assign personality traits (“vivacious”, “bubbly”, “jolly”) and, worst of all, squeamish phrases that damn with faint praise. “Such a pretty face.”

Nothing To Lose is also about curiosity. In this safe space, with the performers holding the power, we are permitted to de-mystify the fat body; invited not to avert our eyes as we otherwise might. It would be a spoiler to reveal how that happens but it’s quite literally a show-stopper. We’re shown the cruel side too: judgment and revulsion masked as curiosity. “How do you have sex?”, “Do you snack between meals?”, “Doesn’t your back hurt? Your knees?”.

Drinkwater is an internationally known “fat activist” but Nothing To Lose does not preach a simplistic “fat is beautiful” message. This acutely self-aware show knows the more achievable task in one evening is to initiate our journey towards that appreciation, not to complete it.