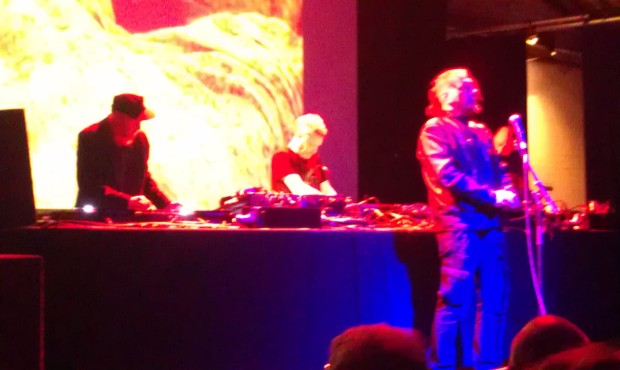 People form a tight, committed knot before the stage. Nurse With Wound’s show is why many have come. “I’ve been listening to Soliloquy for Lilith five nights a week since 1990,” a guy tells me solemnly. He doesn’t say “every night” so I believe him.

A table runs the length of the stage, sagging with gear and on the screen a ticker counts down. “Live it is always improvisation and I have very little control over the direction of it,” Stephen Stapleton told Absinthe.com.au a week before. “We have guests… usually people I meet an hour or the day before… a performance artist, poet or juggler or whatever and they usually end up on stage with us.”

We are spared the poet and spared the juggler because Hungarian black metal vocalist Attila Csihar (Mayhem, Sunn O))), etc) is in town. Csihar is here for a Gravetemple gig a few days later and, as it happens, idolises Nurse With Wound. Thus, in a confab twenty minutes before the show (a whip-tight turnaround, even by Stapleton’s standards), it is settled: Csihar will guest. As the Nurse With Wound trio of Stapleton, Colin Potter and Andrew Liles begin to erect the Nurse With Wound sound monolith – Stapleton labouring over what could be a pepper grinder and Liles playing recorder – Csihar begins to zombie-walk from stage left, en route to delivering a performance of terrifying charisma, his gasping screeches inhaling us into the bowels of the NWW psychic innards; a kind of nihilistic bonfire where Victorian-era armchairs hurtle down cliffs, mattresses levitate from paddocks, house-dwellers flick flames from their clothes and a couple sleep peacefully wrapped in slabs of raw meat: all of it seemingly beamed to the screens directly from someone else’s nightmare.

Meanwhile, Nurse With Wound labour, Potter in particular not bothering to mask the anxious intensity of creating music that, while it is obviously improvised, also feels entirely impenetrable.

From Csihar’s Blixa Bargeld-esque screeches to his ghoulish throat-sung glossolalia – all of which is processed by the nurses into something ever more fearful – comes a genuine sense we’re signing off on a contract of some nameless ritualistic evil. Finally, Csihar turns, raises his arms, hallows the trio, then lurches off. A great grim wall of noise is raised and at some point in the disorienting melee, a guitar appears slung across Liles’ chest on which he plays some brutally distorted power chords, causing a few relieved smiles of recognition to pass across people’s faces.