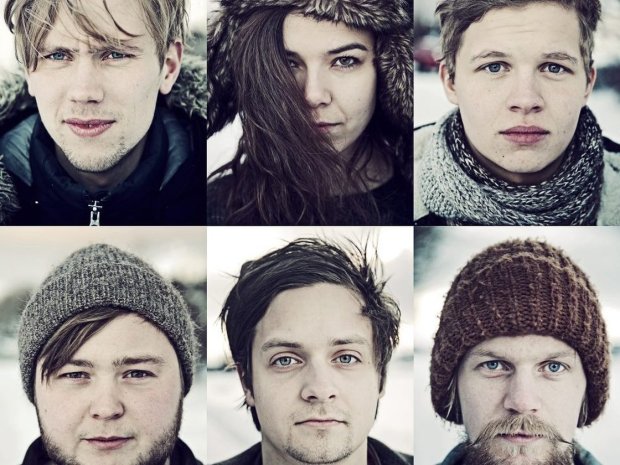 Of Monsters and Men (Enmore Theatre)

Icelandic band Of Monsters and Men write bombastic, feel-good folk pop that seeks, and swiftly finds, gratification. In Australia for Splendour in the Grass, their original Metro sideshow was upscaled to a three-night run at the Enmore Theatre.

They open silhouetted behind a transparent white curtain as a cacophony of orchestral noise builds. When the curtain drops to ‘Little Paws’, the opening track of their Platinum-selling album My Head Is An Animal, ‘the great reveal’ reveals little more than a five-piece that’s now a touring seven-piece, but the sold-out crowd responds with screams regardless, the high pitch of which confirms ample young blood in the room – from tight huddles of teenage girls to several (rather touching) all-family affairs.

Slinging a semi-acoustic guitar – as does her co-singer Ragnar Þórhallsson – lead singer Nanna Bryndís Hilmarsdóttir’s apple-cheeked face reflects an effervescence you can’t help but warm to. Her unaccompanied intro to ‘From Finner’, however, reveals a voice that favours over-projected vowels to steady flow, perhaps suffering in fullness post-Splendour.

The slight patchiness of her voice is most obvious on the stripped-back ballads like ‘Love Love Love’ and ‘Slow and Steady’ but given it’s the big rollicking anthems like ‘King and Lionheart’ and ‘Little Talks’ that everyone – including the band – throw themselves headlong into, where Hilmarsdóttir’s voice is swamped by
encore, ‘Yellow Lights’. A sense that even if the show was nothing more than cheerful music played by cheerful people to be amply cheered by, that’s no small pleasure on a midwinter Monday night.