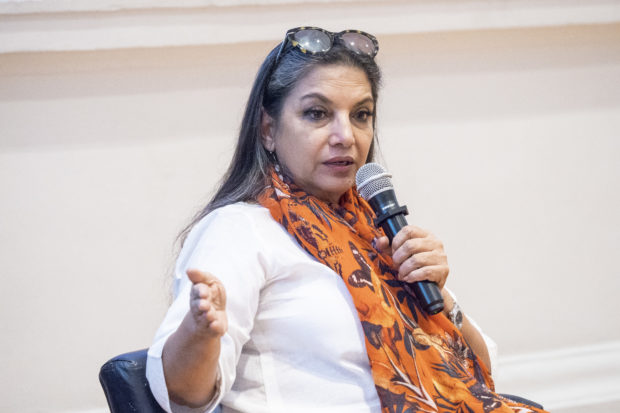 I glide out of Changi Airport in a chauffeured limousine. I have a cold rolled face cloth, The Straits Times’ broadsheet and market updates murmuring on the radio. Had I not been met at arrivals with a ‘HENNESSY’ sign I’d suspect a bullish Asian businessman remained curbside for pick up. My imposter syndrome suggests that guy wouldn’t be sliding around quite so much on the beige leather seat.

“The water looks very flat,” I say to the driver. Singapore Strait, in fact, appears to be rippling at eye level like an infinity pool viewed from a beach towel, as if the slightest tectonic quiver would have it vertical in an instant. “This was swamp before,” he says.

Singapore has upped its size by one quarter through decades of land reclamation and has pushed its coast back three kilometres. Still, it’s 11,106 times smaller than Australia. Small but mighty: Singaporeans possess the world’s second-most powerful passport, ushering them visa-free into 188 countries.

The Fullerton Hotel, which is responsible for my luxurious airport pick-up, is a neoclassical grande dame set on the Singapore River. Management assigns Fabula to show me around. She wears heels, stockings and a pencil skirt yet her skin stays matt even on the rooftop where the equatorial sun is boiling off the remnants of a downpour. I ask her for food tips and watch as she lights up. It’s like a magic trick around here. Singaporeans variously claim Chinese, Malay and Indian descent, and Fabula, of Malay descent, insists I visit the Bugis district for the best nasi lemak and nasi ambeng. I tell her we have pretty good laksa in Sydney. She laughs, recalling a home-cooked version cooked for her by an Australian friend. “It taste like chicken noodle soup.”

Food is everything in Singapore but I’m here for the art. Singapore International Festival of Arts (SIFA) has run under different guises for 41 of Singapore’s 53 years as a republic. It bounced back from a two-year hiatus in 2014 under the helm of avant-garde artist Ong Keng Sen who, in 2017, in his final year as artistic director, talked about his struggles with government censorship. “The promise of no censorship evaporated within about 15 months,” he told Guardian Australia.

SIFA’s new artistic director, Gaurav Kripalani, programmed a theatrical adaptation of George Orwell’s 1984 for the festival’s opening weekend last year, and it was enough to seal my decision to go. Several SIFA shows looked good but I was especially interested in how audiences might respond to 1984’s themes of censorship and state surveillance given Singapore’s Ministry of Culture still signs off – or doesn’t – on art publicly presented here.

That night, as other tourists herd around a waterfront light show, I attend “1984: The Book Club”. It’s hosted by local poet, graphic artist and literary critic Gwee Li Sui, who is so fluent in Singlish he wrote about the “wacky, singsong creole” for The New York Times. Gwee is delivering a SIFA lecture on Orwell’s novel, too, but decided to run a book club-style event in advance. “So you have your own ideas rather than being influenced by me,” he explains to about 15 attendees, who nod politely. As we move through 1984, Gwee jots our best insights on a whiteboard. Intelligence pulsates from his wiry frame like radio waves from an antenna. You want him to think you’re smart, too, though I just end up feeling loud and blurty. Singaporeans are reserved, I am learning, and even in this small group a microphone is passed around for audibility.

One woman insists Big Brother’s telescreens are a plot flaw. “There were too many – how could they all be checked?” A guy counters: “It could be automated like that city in China where if you jaywalk they put your face everywhere and spray you with water.” A young man says Big Brother’s bureaucracy reminds him of the Singapore Army – “the higher up you are, the freer you are” – at which the room erupts into raucous laughter. When parallels are drawn with North Korea’s dictatorship, however, everyone nods gravely.

The next day I ask a woman gallery-sitting if arts censorship in Singapore is real. “Oh yes,” she says. “Everything has a dotted line to the Ministry of Culture.” Yet 1984 passed muster? “It’s Western and well known and global,” she says. “It’s not like they updated it with Singaporean actors.”

In the foyer of the Esplanade Theatre, directly after exiting British playwrights Robert Icke and Duncan Macmillan’s gruelling two-hour adaptation, I watch locals line up to take selfies with Big Brother promo displays and my interest in 1984 as a site-specific work fizzles out. Of course many here see the text’s most dystopian depths as more pertinent to some other nation. We do in Australia, too.

I go to the hawker markets – my favourite is Newton Food Centre, the one in Crazy Rich Asians. Sitting in the humid night air, grazing until I’m gorged, I feel both among company and blissfully alone. No one stares, no one cares. My SIFA highlight comes a couple of nights later. In an auditorium booming with the stirring sound of Frank Sinatra’s “My Way”, I find myself fan-girling to footage of Shabana Azmi as a stunning young actress and luminary in India’s parallel cinema movement and, later in life, an activist campaigning for slum-dwellers and against religious extremism.

Azmi and her husband Javed Akhtar – a famous poet, lyricist and Bollywood screenwriter – are at SIFA for a hosted conversation and poetry reading called “Rhymes of Love”. Men and women of all ages gaze at Shabana as if she’s a goddess only briefly in fleshly form. “I describe her as the Meryl Streep of India,” festival director Kripalani tells me later.

“Do you write poetry, too?” an audience member asks. “No,” says Azmi, “I provide the inspiration.” On cue, Akhtar stands to read love poems, in Urdu and then in English. “Translation is like pouring fragrance from one bottle to another,” he says. “Some scent is lost.” During his first reading in Urdu, the room is spellbound, silent but for collective inhalations and rapturous sighs. When he reads in English, the room hardens and dislocates, rustles and murmurs in ways that don’t match his words. I hear the scent lost.

Control over question time evades the host entirely. “Please,” she begs, “just one compliment then ask your question.” A soon-to-be-wed couple requests marriage advice. “It’s about giving your partner the right to dream,” offers Akhtar. Azmi adds: “It’s about daily adjustments, being best friends, and going back and forth on who dominates.” People nod fervently. I take notes.

Azmi talks about a poem written by her father, also an Urdu poet, after she was born, which includes the line: “History has not yet recognised your birth.” Social justice can be slow to come, she says. “But if you work for change, you build in the possibility it may not happen in your lifetime, yet you still do it.” I write that down, too.