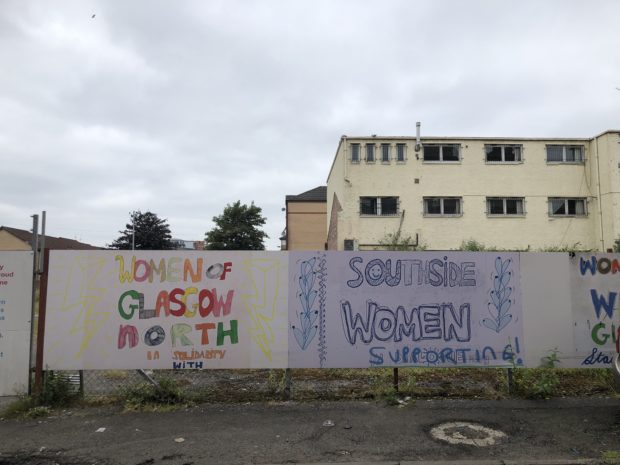 First published in The Australian, November 2019

“If it’s not in London does it even exist?” says Sue John, chief executive officer of Glasgow Women’s Library. “We’ve had Londoners say there’s no women’s history museum and we say ‘Hello’,” – she waves – “We’re up here!” Glasgow Women’s Library is the UK’s only accredited museum dedicated to women’s history. Last year it was among five organisations shortlisted for Britain’s biggest single art prize, the Art Fund Museum of the Year. Tate St Ives in Cornwall won but the library was the first social justice museum shortlisted in the prize’s 45-year history.

Despite its stellar work representing half of the population, it flies under the radar. Glaswegians who know it can’t gush enough yet the majority still doesn’t.

First to get gutted when the library relocated in 2015 to the east end’s former Bridgeton Library were the surveillance mirrors and a rather daunting front desk. “We ripped out anything that was a barrier,” says John. The largest and loveliest room in the 1906 building was once a blokes-only space – the gentleman’s reading room – but is now used for book launches, plays, screenings and exhibitions. “We even dance there,” says John.

As she rustles up a cuppa and some Tunnocks teacakes, I look through rows jammed with books by or about women. One stands out. It’s called Where Are The Women? which is precisely the question the library’s founders had in 1990 when Glasgow was anointed European City of Culture. “There was this mythologised masculine history,” says John. “It was the city of shipbuilding, of the turn of the century artists known as The Glasgow Boys, of this romanticised idea of the bearded poet.” Further provocation came in the 1980s, when a generation of new painters from Glasgow School of Arts were dubbed The New Glasgow Boys, at which point two female art school attendees, Adele Patrick and Kate Henderson, decided to rectify what they saw as Scottish women’s ongoing invisibility. They founded a series called Women in Profile which lead to the library’s establishment in 1991.

While the library’s collection dates back to the early 1800s, including 1930s dress patterns and violently anti-Suffragette propaganda, its best work isn’t stuffed on a shelf but out on the streets. Its eight heritage walks tramp different Glasgow districts to tell the stories of “hitherto unsung women”. For £10 you can join a guided group walk or take a self-guided stroll using a map or an audio file, both free to download from the website.

“Who doesn’t like walking about a graveyard?” says John of the popular Necropolis tour, which steers you to the graves of notable women buried in Scotland’s earliest garden cemetery. On a sparkling summer day, I go up hill and down dale to find the tomb of Jane, Elizabeth and Margaret Buchanan, the daughters of cotton baron George Buchanan. All outlived their male siblings and none married, ultimately bequeathing the equivalent of £4 million to charity on the condition their tomb be maintained in perpetuity.

Because women’s history is notoriously under-told, the tours take stamina to research and launch. The flipside is walks I’d describe as more revelatory than merely interesting, especially if you’re a repeat visitor to Glasgow keen to see it anew. I do the new Suffragette City East walk but strike out on a day even hotter than the last. Soon after I tear up at a traffic light hearing stories of suffragettes such as Ann Macbeth being force fed, the tradition of ‘taps aff’ at every turn begins to distract me. A woman in Poundland explains that when the temperature tops a certain heat, Glaswegian men take off their tops. “Aye,” she says. “And those that do are never particularly bonnie.”

Appetite for the walks just keeps growing, says John. We flip through the visitors’ book together. “Edinburgh, Manchester, the US, and, ooh, Istanbul!” she says. After 25 years with the library, her enthusiasm is still growing too.