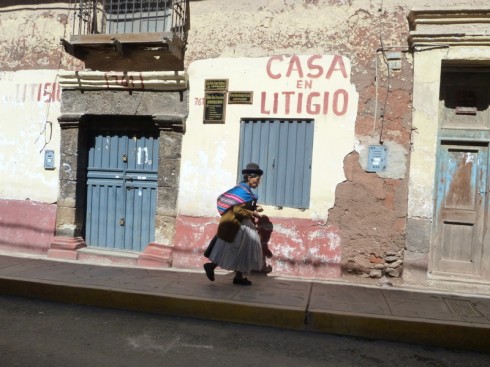 First published in Get Lost magazine, May 2011

We’ve changed travel plans to come to the Virgen de la Candelaria festival in Puno, Peru, but on arrival I’m felled by altitude sickness. Puno doesn’t look or feel very high but at 3,830 metres above sea level it’s higher than both La Paz, Bolivia (at 3,640 metres) and Machu Picchu (2,430 metres).

Barely in town two minutes, I barricade myself in a hotel room and eliminate any light. As the full wrath of the illness descends, I clutch my agonised head, writhe on the bed, pace the room, groan, moan and puke in the shower cubicle. One altitude pill and three cups of coca leaf tea later (the ancient Andean remedy for the sickness) and I can see straight again. I even manage a laugh when my travelling partner bursts into the room to announce “Get up! Horses are about to storm the plaza! Then there’s going to be a bonfire!”. South American festivals are all about theatrics – it seems fitting I experience some of my own in advance.

It’s 6pm when we set out. Puno slopes down steep Andean hillsides and skids to a halt on the shore of Lake Titicaca. The town has declared itself the folkloric capital of Peru and observing the many Aymara and Quechan women in traditional garb, ninos swaddled in bright, woven blankets slung sideways across their backs, it’s a hard claim to dispute. Tonight – February 1 – is the first official evening of the seven-day, annual celebration. The festival’s origins are pre-Spanish but its original rhyme and reason has now merged with Catholic iconography. Larger crowds annually are attracted to its music, dancing and extravagant costumes. In fact, the festival resembles a more navigable, less riske Carnival.

No storming horses eventuate but by nightfall we’re caught in a crush of locals parading out of the church and towards the main plaza. We’re in hot pursuit of the Virgen, her statuette carried aloft like a princess. She bobs along a block ahead, shimmering purple, silver and holy against the night sky. Rose petals rain on her, extended from balconies in buckets nailed to sticks. Our faces are wet with holy water and the sweet, earthy scent of Palo Santo incense envelops us, as hundreds of candles gulp at the already-thin air. So ensconced in the festivities already, it’s unfathomable that an hour before I thought I’d never leave my hotel room.

Escaping the procession we watch as the Virgen is carried into Puno cathedral. Rain falls but still the crowd swells, helping vendors do a cracking trade selling the ubiquitous anticucho (skewered meat and potatoes). We laugh at numerous absurdities, like the long prong brandished by a forerunner to jab unruly power lines out of the Virgen’s path. Blocked by the crowds, no taxis can deliver passengers to central Puno hotels so when tourists arrive, their backpacks wrapped in waterproof covers, they shuffle along like shell-shocked turtles, heads turning slowly beneath their humps, trying to get their bearings amid the melee.

By 9pm, pan-flute and brass bands are mushrooming up everywhere. Dance troupes prance around waving what appear to be handkerchiefs while others do a slow, swaying dance that seems to invoke a semi-trance. Several damp and dazed-looking gringos like us are spotted in the crowd and we pass tidbits of information back and forth like sugary snacks.

“Did you know the virgen has more than 50 outfits?”

“Half the brass bands are bussed in from Bolivia!”

“Did you know that thing has fireworks strapped to it?”

The “thing” in question is a rickety-looking bamboo structure – the Chitty Chitty Bang Bang of firework towers. It’s lit via dangling wicks and begins whistling and twirling, fireworks blasting off at dangerous angles as sparks ricochet off rooftops. Watching the grinning crowd, I start to settle into that South American way of being amused instead of alarmed when things go awry.

We’re wrenched awake at 7am the next day by a brass band marching under our window. It’s sunny and we’re blinded by murals laid on the streets, made from grass, dyed sawdust and flowers. The sharp, high-altitude sun angles the colours directly into our eyes. Still gripped by altitude sickness, I think: “I’ll take in the street art later.” But before long, the Virgen is on the march again. “She’s not going to walk over the murals is she?” I ask, a little panicked.

She does. An hour later, the procession has passed and the street designs are trampled. Too late I realise the labour-intensive murals were a devotional carpet for the Virgen, an ephemeral offering barely created before it was destroyed. I later attend a Catholic mass in the Virgen’s honour, but the murals speak more to me of devotion than the church’s pomp.

A deranged, drunken vibe characterises Friday’s festivities. The performers know it’s their last chance to practice and tonight they dance like no-one’s watching. Settling into the Miski Wasi bar high above Puno’s second-largest plaza, Parque Pino, we drink warming Ocucajes (Pisco mixed with spiced herbal tea) and watch as a parade begins. It loops around town, spilling down side-streets and clogging up exit-ways. Huge groups of bowler-hatted Aymara women wearing matching skirts and shawls do their graceful, swirling dance followed by groups of be-suited elderly gentlemen spinning matracas (spinning clackers). Troupes of young men proliferate, wearing bull-fighting suits. Even the police have a troupe which performs a rather silly-looking routine, complete with high kicks and hankies. And behind every troupe is a brass band, some with up to 40 tuba players. Later, we roam and drink Cusquena beer with a resting brass band, horns slung casually under their arms.

On Saturday we climb up to the giant condor perched sentinel over Puno at 4,000 metres. Drifts of horns are carried up on gusts of wind so, even here, it’s impossible to escape the anticipation. It’s both exhilarating and exhausting and as the days pass I make increasing hotel pitstops to escape the stimulus. Later we visit the Virgen and are surprised to discover she’s undergone a costume change. Her shimmering gown is now a demure apricot gingham affair and, inexplicably, her four angel sidekicks have transformed from blondes to brunettes.

After a sombre mass that evening, we emerge to yet another parade. This time, there’s costumes: devils, gorillas, grim reapers and more. The dances are more flirtatious now, with young women in glittered bodices, short skirts and stiletto boots.

Thunder and lightning add to the already-abundant drama at Puno’s stadium on Sunday. We brave a bewilderingly early kick off and by 7:30am we’re sitting on bleachers in voluminous plastic ponchos, eating empanadas de pollo, and feeling somewhat miserable. Fellow festival-goers, however, seem oblivious to the rain. They don their ponchos with an efficient stoicism we sun-blessed Aussies could never muster. Meanwhile, an explosion of dancing and costumery unfolds before us. Tasteful the costumes are not but colourful they are. Each troupe has eight minutes to impress the crowd while a compere narrates the action in a booming Spanish baritone. Dances are a mix of African, Spanish and Incan cultures favouring feathered headpieces and men in gigantic devil suits. Devils and dancers are accompanied by people dressed as guinea pigs (a Peruvian delicacy), gorillas and other ludicrous hybrids we can’t fathom.

A hailstorm sweeps the stadium but the dancers dance on. We shelter in a smelly stairwell alongside other rain-soaked refugees and drink a beer then a sweet coffee, unsure which feels better. Later, we watch the dancing on Peru TV at our hotel. The guests have morphed into performers and the place has become a festival dressing room – my nap is thwarted by men stomping the hall in boots fringed with bells.

There’s no need to return to the stadium. The festival has split at the seams and incidental performance is everywhere. Devils order street food, dancing girls adjust feathers in mototaxi mirrors and gangs of gorillas haul their drenched llama fur from corner to corner.

The rain is gone on Monday. Anyone who owns even a notional idea of property has erected bleachers or crammed in rows of chairs and is frantically selling them off. We buy seats from a sweaty, stressed-out local who’s oversold his plot and watch as he wheels and deals the morning away. Today, the cholitas (traditionally-dressed Aymara) parade by wearing almost painfully beautiful colour combinations. The crowd gasps as another group of ladies fling their skirts skywards to reveal up to 15 skirts beneath.

The festival continues on Tuesday but regretfully it’s time for us to leave. Spent from the spectacle, ears still throbbing with bass drums and brass, our bus wends its way up through Puno’s city limits. We review our travel plans. “Carnival?” we ponder.

Note: the photos here at my snaps. To see James Brunker‘s incredible photos, please see the PDF at the top!