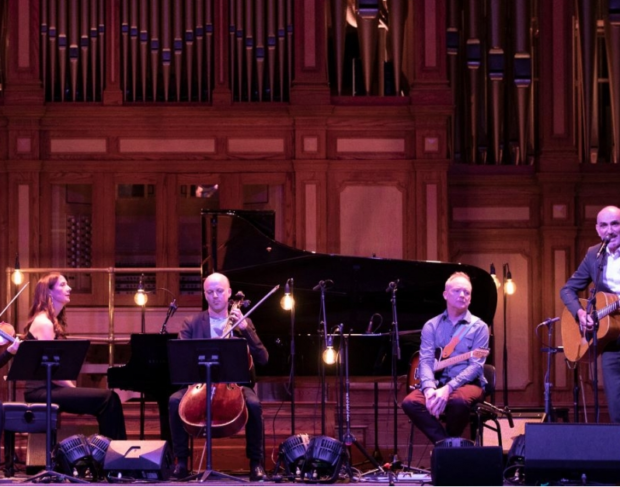 For two years, Paul Kelly’s partner sent him poems about birds. Tonight’s co-composer, James Ledger, presumably found a few too, as did Anna Goldsworthy, pianist with Seraphim trio and the one who suggested this collaboration. Such poems are not hard to find. “Birds have fascinated poets for centuries,” Kelly writes in the program. “And what better way to honour them than by sending songs out into the air?”

That sense of honouring is primary tonight. To do so with even more potent prose than usual, Kelly strays from his earthy off-the-cuff charisma into stiffer scripted terrain. There’s just one nod to his songbook: the “mass extinction” we’re in “because when little things go big things follow”.

Pliant prey fills the room: bird-lovers, poetry-lovers and lovers of every move Paul Kelly makes. Lovers of a rare opportunity in Sydney on a Saturday night to hear original contemporary classical music. Those who tick all of the above.

Fourteen poems are presented, including one by the project’s only living poet, Robert Adamson, whose verse about the Tawny Frogmouth – “the night’s flying with you” – is a beautifully fitting finale.

Yet the material can’t entirely decide if it’s for a gig, a poetry reading or an abstract musical theatre. At its best, it takes wing as uncategorisable hybrid of the three.

This hybrid happens when the players turn from their individual expressiveness to cohere forcefully like, well, like a band – as on Robert Wilbur’s A Barred Owl and Judith Wright’s Thornbills. On John Keats’ Ode To A Nightingale Kelly moves from beat gen spoken word to Shakespearian-style monologue, with Ledger finally finding the volume on his electric guitar, halfway between prog and psych.

And while the classics from Yeats, Dickinson and Hardy are lovely, their muses are thrushes and nightingales. I’m not suggesting the poems should have all come from Judith Wright’s classic 1962 collection, Birds, because two already are. But if they had, the show would’ve flown the coop of its understatement.

And when Thirteen Ways To Look At Birds is out on CD next month, I’ll relish hearing Kelly’s drought-dry voice sing the truth of Wright’s Black Cockatoos again, “crying the world’s unrest”.