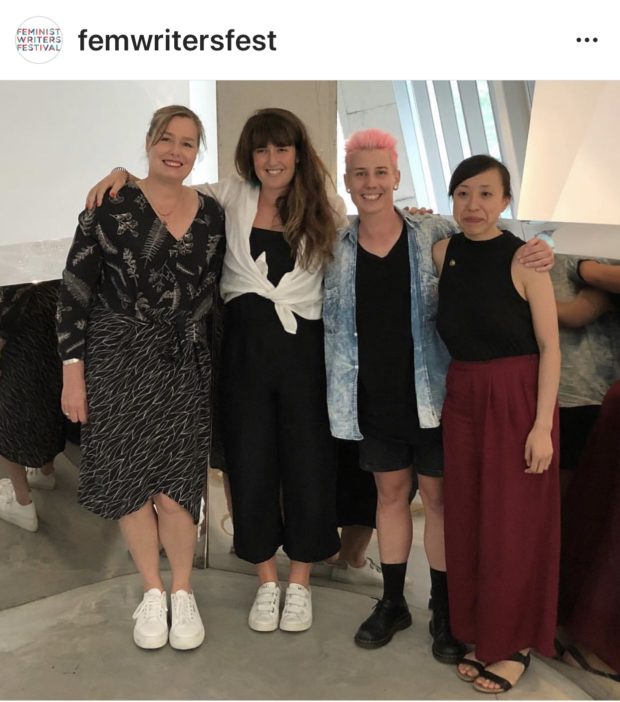 Pitch Me: advice from editors at the Feminist Writers’ Festival


On Friday I went to a Feminist Writers’ Festival panel called Pitch Me. It was billed as:

There’s been a surge in online publishing about feminism and gender in the past five years. Meet some of the editors behind it and find out about the publishing choices they make, what they are trying to do differently, and maybe even how you can pitch to them! I didn’t record it, so these highlights are paraphrased from my hand-written notes. The purpose was to provide tips for newer writers, though I did permit myself one link to a Jenny Hval review I wrote as it seemed relevant to both Lucy’s ‘personal is political’ comment and also to some of the themes Archer explores.

Lex: How much do you think about feminism as an editor and a gatekeeper, of a kind?

Candice says it’s always ticking over in the back of her mind. It informs how she commissions but not always explicitly. SBS Life hopes to encourage more young Asian Australian voices to come forward so it’s always pondering intersectionality. “It doesn’t address feminism, necessarily, but it comes from a feminist perspective… We’re aware our readers are interested in feminism.”

Wendy has only been editor of Daily Life for seven weeks. She’s eager for beauty pitches/ideas because she’s editing the whole lifestyle section. Her interest in promoting feminist perspectives goes back years. She has always thought “if not me, with the news platform I have, then who?”

She is glad she came into this role in middle age, not as a more vulnerable young woman.

This leads into a discussion on trolling.

Lucy says Archer is lucky as its readers are largely supportive. She deletes trolls’ comments because neither her writers or readers benefit from seeing them. She enjoys her role doing the behind-the-scenes ‘grunt work’ to bring less privileged or visible voices to the fore.

Candice is quiet on social media because she spends most of her energy doing productive daily work. She doesn’t have time to engage with trolls but acknowledges that as an editor, she’s behind the scenes and rarely the target. When she was Daily Life editor she tried to give writers a platform, if they wanted it, to address trolling.

Wendy says though she had thick skin, she was still shocked by comments she saw, especially trolls of News Limited sites. Their intention was to make their targets feel like failures in every way. “By the end I was like, bring it bitches, give me your best stuff.” She began snapping up their comments – metaphorically – like twigs and fuel for the fire.

Three simple words helped her frame it: consider the source. Who are the trolls? Why are they doing what they’re doing?

Lex: Why are personal stories so popular? Why do women tell them most?

Lucy points to the historical link in feminism of ‘the personal is political’. Women have more practice understanding and doing it. They’re more open to sharing personal stories because that’s been how it’s been done.

Lex: Where are you looking for new writers/new voices?

Everywhere, says Wendy. The people in the foyer and the people involved with Women In Media Victoria (she’s a mentor). She was surprised to learn Daily Life has a 50% male readership. She wants more non-straight, non-white writers.

Candice says she’s enjoying some extra time at SBS Life to hear from, and develop, new voices. When you’re very busy you tend to go for writers who’ll get it right quick. “I don’t want to only accept pitches that are 90% right” because it limits the voices included. Sometimes she asks writers to recommend their friends.

At Archer, Lucy says the turnaround time to produce an article is commonly up to two months, especially if the pieces require careful development. She can’t work with time-sensitive pitches but she can work with writers to develop a piece they’re happy with.

Lex: Does it frustrate you that develop new voices and other publications take them from niche to mainstream?

Candice says this makes her proud. Lucy too.

Lex: Is it true there’s a rule that if you’re only changing 10% of a piece, you don’t have to get back to writers on it?

Wendy says she hadn’t heard a figure. She always tries to check back, even if just quickly. Sometimes she has little time at the pointy end because a piece may have been held up passing legal. Australian defamation laws are tight, which is also why less people are coming forward as part of #metoo.

Wendy says she isn’t personally too precious about edits; and accepts the same degree of change as what a sub might do on a busy paper. She doesn’t like it – no writer does – when subs chop for length from the final paragraphs (especially if the end links back nicely with the intro) but she lets it go.

Candice says it’s tricky to edit first person or opinion pieces; you can’t interfere too much because someone’s byline is on it. Lucy works with writers so it’s all in their own words.

Lucy says Archer has always paid but not enough. $25 for an online piece and $150 for a print magazine piece. That’s all they can do. She was originally a volunteer editor and now she works on an honorarium basis but it still doesn’t equate to an hourly rate. Archer’s funding is from a grant. No-one should write for free for publications with lots of money.

Candice says you should always ask about money but perhaps not in the first line of an email. She suggests many writers got their start writing for free. She interned with YEN magazine, which was her favourite mag. Ask yourself: what am I getting out of this free labour situation? Am I absorbing experience that will then help me to make money?

Wendy says she is against women writing for free. Women are brought up to please and not make waves and she wants them to stop doing it. Daily Life pays an ad hoc rate of $300 (bar book extracts).

Lex: What stands out in a great pitch?

Wendy likes authenticity; someone being their real self. In a pitch for a personal essay you might say: this happened to me, from this I learnt x, y and z, here’s the theme, here’s the reason the story is topical.

Is it linked to any current news? Mention that. Find inspiration in the papers. Lots doesn’t go online; so flip through the hard copies. Go to a cafe and take photos if you can’t afford to buy them.

You could also think like an old-school journalist. A women’s shelter is closing: what’s the impact?

Pitches should be short and tight. The “shit, I didn’t know that!” part at the top. It needs to cut through all the other stuff. The top line is the strongest, the second line is ‘why now?’ Indicate when you can file the article.

Don’t send Lucy short turnaround pitches. Archer operates on news hooks sometimes but differently. They want fresh stories. Not your anniversary of ‘yes’ day. Not Mardi Gras stories. But intersex awareness day? Sure. Explain why YOU should write it.

Know the publication. Look at the pitching guidelines. If you pitch according to those, bonus points, because then Lucy also knows you’ve read the website.

Candice says you must know who you’re pitching to. If starting out, pitch to your faves. You’ll know what they’ve recently covered and what their gaps are, without even trying. For SBS’s emerging writers series, she wants Asian-Australian writers with interesting things to say about gender and identity.

B – be brief
E – have an emotional kernel
T – have a thesis, angle and hook

Lex talks about narrative non-fiction book pitches. Provide a sample chapter, a chapter outline of between eight and 12 chapters at around one paragraph each. The most important thing: a synopsis. What is the book and what do you want to say? Include your bio. A killer potential title helps.

Q&A: How do I find editors’ email addresses?

If editors are hard to reach, she suggests consider calling the switchboard and reaching them by phone. Wendy says: “If someone calls me I’m stunned and impressed.” (Candice and Lex hate calls, so beware!)

Write down email addresses from the publisher’s panel on papers and magazines. Ask other women writers – they’re good at helping. If you have another contact at the publication, ask them.

Q&A: How long do you wait on a time-sensitive pitch?

It’s tricky so perhaps don’t start out with a newsy story and a new editor. Wendy says she likes how experienced freelancers treat her ‘robustly’ and know how long to wait before following up, or sending the story elsewhere.

They agree all’s fair with a newsy pitch and if it’s snapped up, that’s OK.

Candice and Wendy are OK with polite follow-ups. Lucy finds them stressful and encourages you to hold off at least two weeks.

When an editor doesn’t reply, it may be because your pitch isn’t a ‘yes’ or a ‘no’. Don’t rush them because they might be compelled to say ‘no’ where if they have time to consider further, it might be a ‘yes’.

Wendy suggests following a writer you love, closely, and analysing how they do what they do, style-wise. She did this with Caitlin Moran.